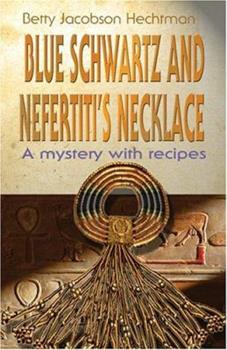 Blue Schwartz and Nefertiti's Necklace: A Mystery with Recipes

Blue Schwartz and her best friend Yvonne know she's innocent. There's just no way she would have taken a necklace from the man whose kids she babysits for--let alone a priceless necklace that may have been Nefertiti's. To top things off, she's being given a hard time by her teacher about a school project, when all she can concentrate on is finding out who stole the necklace. Time is running out...her school project is due and her accuser is going...

An antique necklace is missing!

Published by Thriftbooks.com User , 14 years ago
Reviewed by Regan Zaborowski (age 8) for Reader Views (11/07) "Blue Schwartz and Nefertiti's Necklace" is a story about a girl named Blue Schwartz who babysits a lot for Professor Albany's two children when he goes out with his wife, Mrs. Albany. Professor Albany is a teacher who likes to study about old times and things. Other main characters in the story are Yvonne, who is Blue's best friend; Zach, who is Professor Albany's assistant, and Mrs. Bliss, who is Blue's neighbor and where Blue likes to go to watch cooking shows on television. Blue likes to make up her own recipes, and they are in the back part of the book. The big problem in this story is that Nefertiti's necklace was missing from the glass case in Professor Albany's house. There was a big party at Professor Albany's house, and a lot of people saw the necklace. Professor Albany thinks that Blue took the necklace, and wants to call the police if she does not return it. Blue has many adventures when she tries to find out who the real thief of the necklace was. The ending surprised me. I loved this book, because it was interesting how Blue made plans to find the necklace and how she finally succeeded in her plans. I was surprised by the ending, when Blue found out who the real thief was. I was very glad that she didn't take it. The recipes in the back of the book were fun to try. Blue likes to cook and learn about cooking and new recipes, just like I do. My mom and I tried all the recipes, and my favorite was the French toast. I would recommend "Blue Schwartz and Nefertiti's Necklace" for both boys and girls my age to read because I think they would like the surprise ending and also the cooking recipes.

Published by Thriftbooks.com User , 15 years ago
This fast, fun mystery is a bit reminiscent of Nancy Drew. Blue Schwartz and her friend Yvonne are out to solve a mystery. Blue Schwartz is an experienced babysitter, but her current employers have accused her of stealing. First they are suspicious when the wife's bracelet falls to the floor after apparently getting stuck in Blue's coat. All seems forgiven until after an important social gathering, when they suspect Blue of taking a valuable artifact. Not wanting to trouble her financially strapped parents, Blue seeks the help of her friend Yvonne. Together they carry out an investigation that takes them through the streets of Chicago and into several of its world famous museums. Among the colorful characters are an elderly neighbor lady, a demanding and annoying teacher, a brainy brother, and TV Chef Randy, Blue's culinary idol. An added feature at the end of the novel is a group of recipes Blue created for her babysitting clients and a school project on soybeans. The recipes are kid-friendly and sound yummy. Hopefully Betty Jacobson Hechtman will return with another adventure featuring Blue Schwartz. She is sure to be a hit, especially with younger readers. Reviewed by: Sally Kruger, aka "Readingjunky"

A delight for readers of all ages!

Published by Thriftbooks.com User , 16 years ago
From the minute you open this book, you become Blue's partner-in-crime, as she takes you along for a wild adventure. This story has a child-like simplicity, and is a delightful experience for readers of all ages. The recipes at the end are an added bonus that serve as clever souvenirs for the reader to take with them into the kitchen (the popcorn balls were my favorite)! I especially enjoyed the tour of Chicago's Hyde Park. The characters are familiar, as if they were your own personal friends, and the exciting plot of this charming mystery really takes you away. Take this journey and become Blue's accomplice - get a copy today!

Not Just for Pre-teen Girls

Published by Thriftbooks.com User , 16 years ago
Although I am closer to the author's age than to Blue Schwartz's, I thoroughy enjoyed this book. This is the Hyde Park I remember from when I was in college in the 60's, and the now bittersweet evocations to Marshall Field's, and the current ones to the Medici and Oriental Institute, help the flavor of the plot. The characters are crisply drawn, and the incidental references to such Hyde Park habitues as University of Chicago students and professors are wry and witty (and made me chuckle). A delightful quick read -- and don't be surprised if you get hungry while doing so. After all, it is a mystery with recipes.

Published by Thriftbooks.com User , 16 years ago
Betty Jacobson Hechtman is a Chicago native who now resides in California. She had a lot of experience babysitting as a teenager, and has translated her experiences to juvenile fiction. She currently resides in California with a cat named Einstein and a dog named Yoga. Her love of baking is apparent in the recipes she thoughtfully provides throughout her book. Blue Schwartz is thirteen and is the second of two children in a lower middle class family in Chicago. Her schoolteacher parents are pinning their hopes on her brother-the-brain, and Blue feels isolated, except for her good friend Yvonne. When Blue babysits for a Professor Albany's kids, a priceless necklace said to be Nefertiti's disappears. A stern Professor Albany immediately blames Blue for the loss and threatens police action if she doesn't produce the necklace. Blue also has a report due at school for a non-supportive and lazy teacher. Then there is the new guy at school, Shane, who is showing some interest in Blue, making her heart jump. Blue and her friend Yvonne try all sorts of clumsy plans to retrieve the necklace until Blue discovers the culprit and the menace of Professor Albany: "'He wouldn't really want to call the police. They'd start checking on the necklace and find out what he was claiming to be his was stolen property. No doubt, they'd start asking him a lot of questions he wouldn't want to answer. When you're dealing with illegal things, you don't want the police involved, Blue. Just suppose some drug dealer gets his stash stolen. He isn't about to report to the police.'" Betty Hechtman does a masterful job of producing Blue's voice for the reader. What goes on in a thirteen year old's head is a mystery to much of the population, including their own parents! Hechtman combines Blue's first tentative steps into adulthood with compassion, wit, and laughter. Blue and her friend Yvonne are delightful characters, as are the friends she makes as Blue struggles with some very adult problems. Hechtman's plot is fast-paced and scaled down to a teenager's world. She uses cooking as glue to hold together an already intriguing plot that involves visits to the Oriental Institute, where Yvonne's mother works. Hechtman produces a book that is perfect for the 12-15 year old crowd. She manages to teach, entertain, and make the reader smile. Shelley Glodowski Senior Reviewer
Trustpilot
Copyright © 2022 Thriftbooks.com Terms of Use | Privacy Policy | Do Not Sell or Share My Personal Information | Accessibility Statement
ThriftBooks® and the ThriftBooks® logo are registered trademarks of Thrift Books Global, LLC