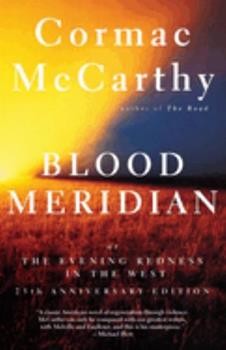 Blood Meridian: Or the Evening Redness in the West

An epic novel of the violence and depravity that attended America's westward expansion, Blood Meridian brilliantly subverts the conventions of the Western novel and the mythology of the "wild west." Based on historical events that took place on the Texas-Mexico border in the 1850s, it traces the fortunes of the Kid, a fourteen-year-old Tennesseean who stumbles into the nightmarish world where Indians are being murdered and the market for their scalps...

Published by Runner , 5 months ago
Indelible characters, hypnotic prose, depraved worlds envisioned that we suspect or know exist, but didn't want to acknowledge lest we would be somehow tainted. One of the best books I've ever read.

Go into it blind

Published by Auggie , 5 months ago
I went into this book blind and this might be the best book I've read so far.

Published by Thriftbooks.com User , 16 years ago
Blood Meridian by Cormac McCarthy Blood Meridian, by Cormac McCarthy, is the most overwhelming novel I've read for years. I came late to it in two senses. It's almost 20 years since it was published in 1985, and it is late in my own reading life, because I'm 63. I read it on holiday. Not a comfortable choice, and certainly not the best thing to relax with on a sunlounger, while supping a drink with a hat on. But Blood Meridian is, at the risk of sounding pretentious, on a par with Faulkner's 'As I Lay Dying' or Beckett's 'Waiting For Godot' or even that most astounding work of all, 'King Lear'. High claims, but give it a try. You might well have to try it more than once, because it is very strong, and at times even rancid, meat. But a lot of people, after they've closed the book, might find they can't read another novel for a while. I finished the book, and picked up another. But the pages were slipping by and all my head could think on was Blood Meridian. So I did something I very rarely do. I put the other novel down and turned back to Blood Meridian, and read it again. It's a hell of a book. And I'm not speaking particularly metaphorically. It tells us more about the human condition than most other respectable works we laud so much. Blood Meridian is original, disturbing, heretical, challenging, difficult, and awe inspiring. Just like King Lear. Here endeth my rant.

The Sanctity of Blood

Published by Thriftbooks.com User , 19 years ago
I've read all of Cormac McCarthy's earlier books set in Tennessee, such as "The Orchard Keeper" and "The Outer Dark" and I've read his "Border Trilogy" which contained the wonderful, "All the Pretty Horses." Nothing, however, that this wonderful author has written can prepare the reader for the sheer brutality and the sheer lyricism of "Blood Meridian."The Old West portrayed in "Blood Meridian" is not the Old West of Zane Grey or even of Larry McMurtry. Images of the most horrific abound in "Blood Meridian," (charred human bones, blood-soaked scalps, a tree hung with the bodies of dead infants), all rendered in McCarthy's gorgeously lyrical writing.As far as I'm concerned, "Blood Meridian" is McCarthy's best book, by far. It doesn't have the "feel good" qualities sometimes found in "All the Pretty Horses" but I didn't expect it to. "Blood Meridian" is the book in which McCarthy makes crystal clear the one theme that runs through all of his writing: the undeniable presence of evil in the world. The fact that he writes about this evil in language so lyrical and so elaborately beautiful only intensifies the horror of it all. We feel as though we have left the real world behind and entered into some surreal place from which no escape is possible."Blood Meridian," which takes place in 1847, is loosely based on actual events and is the story of a fourteen boy, known only as "the Kid." Drifting through the American Southwest, the Kid joins a disparate and bloodthirsty band of Indian-hunters-for-hire led by a mysterious and learned man called, Judge Holden.It is after the Kid joins Judge Holden and his band that McCarthy really hits his stride. Juxtaposed next to descriptions of the most horrific and grotesque are images of the most sublime beauty. Consider this description of a group of Indians, "...wardrobed out of a fevered dream with the skins of animals and silk finery...one in a stovepipe hat and one with an umbrella and one in white stockings and a blood stained weddingveil." That's prose most authors would kill for.McCarthy, unlike most writers who portray horror, concentrates not on the horrific images themselves, but on his characters' reactions to them. I'm not at all surprised at this, for McCarthy is not a horror writer; he is a writer of literature of the very highest order.Although many people would have expected McCarthy to keep his emphasis on the Kid, he chooses to concentrate on the character of Judge Holden instead. Anyone who has read this book knows it was a good choice for the Judge is the dominant personality in "Blood Meridian" and all the other characters in this book are defined only in relation to the Judge. It is also the Judge who exemplifies McCarthy's major themes and it is he (the Judge) who becomes a metaphorical and spiritual father to all of McCarthy's later characters. This is not a typical "Western novel," not even a very, very good "Western novel." In this book, the line between the victims the perpe

The West Lost and One

Published by Thriftbooks.com User , 21 years ago
Other reviewers admonish to adapt Blood Meridian to film. This simply could not, and should not be adapted because this book's characters drool blood , and the violence here could not be aptly and fairly depicted on screen. If readers are not satisfied with the imagery ,and therefore crave to actually see this brutality on a screen before them, then McCarthy's vision of man as beast indeed can be verified. Blood Meridian is a partly historical account of the 19th-century westward movement and destruction of America's native people in America and Mexico by the bloodthirsty and goldthirsty and nihilistic Glanton Gang. The depiction of killing has scarcely been so graphic, and yet so alluring: you find yourself reading the horrifying scenes over and over again for their sublime description and almost dreamlike imagery. You have never seen nor imagined true Comanche Indian garb, and here it is. You have never read of a more evil character, and here you may, in Judge Holden. You have never read a novel whose main protagonist you almost forget exists, because of the book's other enticing components. And you have never imagined a sky this blood red, but remember: it was. Blood Meridian is McCarthy's masterpiece, and truly sets him apart as the late 20th Century's master of apocalyptic prose.

Tales of the Beast told with awesome beauty

Published by Thriftbooks.com User , 22 years ago
While this book contains some of the most powerful writing of the 20th century, the book isn't for everyone. I've steered several of my 'frail' friends away from it, not everyone should be exposed to some of the scenes in here. But for those with the nerve to read it, this is as good as it gets. One of my 2 favorite books of all time (the other being 'Blood Sport' by Robert F. Jones). I won't try to add much to the details and descriptions other reviewers have listed here, but I will point you to the source material. Look for 'My Confession:Memoirs of a Rogue' by Samuel Chamberlain. Until I read 'My Confession', I didn't think there could be anything like 'Blood Meridian' anywhere in literature. There's no comparing the writing, McCarthy is simply the master in top form when he wrote Blood Meridian. On the other hand, Chamberlain lived thru the actual events described in both books, and adds some true to life details that fans of McCarthy's work may want to sift thru. I was shocked to find that The Judge is not a fictional character. In fact, McCarthy didn't take many liberties describing him. How could such a beast have escaped the scrutiny of history? Where did he go, what became of him? Is he still out there, drawing artifacts and then tossing both the drawing and artifact into the flames, dancing the fandango or playing the violin, roasting innocent passersby over a small fire?
Copyright © 2020 Thriftbooks.com Terms of Use | Privacy Policy | Do Not Sell My Personal Information | Accessibility Statement
ThriftBooks® and the ThriftBooks® logo are registered trademarks of Thrift Books Global, LLC