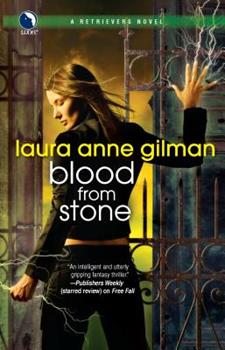 (Book #6 in the Retrievers Series)

Wren Valere's job is driving her crazy. She's still Manhattan's most sought-after Retriever, but after last year's deadly confrontation with the Silence, all this magic-user wants is a break. With her apartment going co-op and her relationship with the demon P.B. putting stress on her romance with partner Sergei, is Wren finally ready to settle down to a more stable existence? Not likely. Because when you're good, trouble always finds you. Wren's...

Published by Thriftbooks.com User , 11 years ago
Really good action, mystery, and character interactions! The usual best from Laura Anne Gilman. This is 6th in the series and it does need to be read from the beginning of the series for the most enjoyment. The stories are stand-a-lone, but the character development and background from the earlier stories areimportant.

We bid a fond farewell to the Retrievers

Published by Thriftbooks.com User , 12 years ago
This conclusion to the Retrievers series wrapped the story up beautifully. Throughout the series, Wren Valare, the Retriever, has had issues with her job. In the last few books, she's had issues with her partner turned lover, Sergei. And, of course, the society has had issues with the demon Fatae. This final book is a nice wrap up for the pair and a solid ending for the series. I hope to see the characters again in other books, perhaps as cameo appearances in Gilman's next series about Bonnie. Rebecca Kyle, September 2009

Enjoyable, if not perfect.

Published by Thriftbooks.com User , 12 years ago
Wren Valere is a Retriever. Using her Talent to channel "current", she performs what an everyday joe would call magic. Usually, she can get in, retrieve what the client has requested, and get out, no strings attached. This retrieval is special. She must obtain the notes of the mad scientist who created one of her best friends-P.B., a "demon" who has saved her life more than once-before those notes are grabbed by people who would enslave him. There are actually a couple of stories going on here. Early in the book, Wren encounters the familiar scent of her mentor and father-figure, Ebenezer, whom she had previously presumed dead. Don't get me wrong, I love Gilman, and I enjoyed this book; however, this plot line suffered from too much tell and not enough show. I felt hammered with repetitive ruminations about Neezer and what he meant to Wren. I got it after the first couple shots, really. It seems space was wasted here that would have been better spent in the heads of the bad guys from the primary plot. That said, this book is still some lovely stuff. I enjoyed the interstitials with Sergei in therapy. Wren and Sergei have long been a favorite fictional couple, and it's nice to see them working on normal (relatively) relationship stuff. I always favor series with non-magical romances; nothing is forced by fate. No "I knew she was my lifemate the moment I scented her" claptrap. The main plot, though it needed more bad-guy time, is also a keeper. We find out more about P.B.'s mysterious past, with a hint that there may be a little more Talent science in the future. In addition, a nifty new character, in the form of a curious Federal agent, is introduced. While I wouldn't exactly call this book a break, it is a lot less frantic than the last two, and that's completely welcome. I expect this series is beginning to wind down after six installments, and Gilman is getting ready to hand the baton to Bonnie and the Paranormal Scene Investigations series, which begins next year with Hard Magic.

A sniffle, a smile, a darned good book

Published by Thriftbooks.com User , 12 years ago
I have loved this series from book one. The evolving relationship that never seemed forced and had the issues a "null" might have in their life. Wren as a character has grown so much during the series I feel like a proud parent letting her finally go her own way for a while. The author has stated it is not the end of the series, merely time for other characters to have their time in the spot light. I am extremely satisfied, while not all plot strings have been tied, leaving enough for more Retrievers novels, enough have been given to leave a deep sense of a job well done. It is rare that I am not just sad at the end of a series, but satisfied. Background information was given on mysterious characters, the bad guys seemed real and frightening and mystery didn't give me a scooby doo vibe. I am calling this the Retrievers "Season Closer", and a rather brilliant one at that.

A solid ending to a good series

Published by Thriftbooks.com User , 12 years ago
It surprises me that this series has not taken off and become more popular than it has. I think it is one of the most original and fascinating urban fantasy series out there. I agree that that maybe book 3 or so was not as strong as the first 2 but I really do think that book 5 and 6 were very strong and interesting and I am sad to see that she is ending the series or "setting it aside" for an indeterminate amount of time to write something else! In this final chapter, Wren's job/life is driving her crazy. She's still one of the best Retrievers, even after last year's deadly confrontation with the Silence and almost wizzing. With her apartment going co-op and her relationship with the demon P.B. putting stress on her romance with partner Sergei, Wren is contemplating a move to the country?! what?!!!! Can anyone imagine wren in the country? I think not! We learn a little more about P.B. and his background where he comes from and someone from his past is after him. Wren has to protect her friend and their special relationship. Intermixed with the action are personal scenes of Sergei trying to figure out his relationship with Wren and what he really wants. Her, her current and just what does their future hold? I will miss Wren and her merry little band and I hope LAG will come back to them soon. If you are picking up this series for the first time I really recommend that you start from book 1. Trying to figure out the current, the silence, the cosa and all that is just too much to start from here. I think this is a solid installment of the series and I don't think fans will be disappointed.
Copyright © 2020 Thriftbooks.com Terms of Use | Privacy Policy | Do Not Sell My Personal Information | Accessibility Statement
ThriftBooks® and the ThriftBooks® logo are registered trademarks of Thrift Books Global, LLC