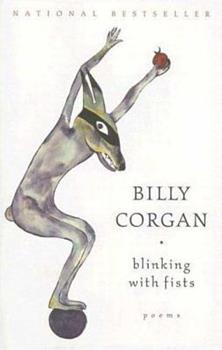 The hit poetry collection from the creative force behind The Smashing Pumpkins Having risen to fame during the grunge era in the early nineties, Billy Corgan is among the most respected figures of the alternative rock world--a visionary artist who, more than a decade later, still commands a devoted following. Long admired for his evocative songwriting, Corgan embarks on a deeper exploration of literary terrain as a poet. Full of "the regretful melancholy...

Published by Thriftbooks.com User , 13 years ago
This is a great collection of poetry by the wonderfully talented Billy Corgan. I recommend it to anyone, especially those who like his musical works.

Blinking with fists - Perfect title for a perfect book

Published by Thriftbooks.com User , 16 years ago
How can you put your feelings into words without loosing any of their power on the way. He can he always could. Deep as he is he gives a bit of himself with every word he writes with every note he plays. Billy thank you for being perfect as you are and for letting us into your world every day of your life.

Published by Thriftbooks.com User , 17 years ago
I found Mr. Corgan's words to be evocative and compelling. I read his poetry book a few times, as you gain more and see the many layers and dimensions to the construction of his words when you are able to go over a book a few times. The first poem in the book, called "The Poetry of My Heart", sets the tone for what appears to be a very personal and deeply moving work of literature by Mr. Corgan. I highly recommend it.

Published by Thriftbooks.com User , 17 years ago
This is a beautiful first book from Billy Corgan. I did not know what to expect when reading it, but as I went through the pages and let the poems sink in, I found it to be written straight from the heart. The subject matter is complex and can be interpreted at great depth. The enjoyment comes from taking your own meaning from the ideas that Billy presents here. I wish that all readers will take the time to pick up this book, whether you are a fan of Billy Corgan or not. As an artist and a visionary, Billy brings great beauty and intuition to his art and invites us to look deeper than what we are used to seeing and feeling.

Published by Thriftbooks.com User , 17 years ago
It's hard to listen to the Smashing Pumpkins, and not be struck by former frontman Billy Corgan's unique writing -- often his songs sounded like poetry set to music. Now he really is a poet. "Blinking With Fists," his first book of poetry, is a stunning, wrenching look at Corgan's ever-expanding talents. Corgan was known for plumbing the depths of his own feelings in his songs. Now he does the same for his poetry. His poems are gritty and jagged, but they shine through as examinations of his emotions: his loves, losses, loneliness, past regrets, and sometimes his hopes. He makes you feel thoughtful, isolated, on a dark street where dogs are barking, and the world seems to be winding down. Billy Corgan rose to prominence during the grunge era of Nirvana in the early nineties, as frontman/writer/vocalist of the Smashing Pumpkins. Later, he was the frontman of the sadly short-lived Zwan. But with "Blinking With Fists," (and the novel Corgan is reportedly working on), he shows that he's not just a musician. He gets to take the evocative, eerie writing that he did in the Smashing Pumpkins and Zwan, and turn that writing into something purer. What's even better, free-form poetry allows Corgan to be less restricted in his writing. In "Blinking," he doesn't have to form his poetry so that it will fit with music. But it still is very lyrical and beautiful, full of strange images and melancholy atmosphere. It takes a little while to really sink in -- but boy, is it worth it when it does. Billy Corgan has apparently left his band days behind him. But his debut publication, "Blinking With Fists," is a breathtaking collection of poetry that bodes well for his solo career. Highly recommended.
Copyright © 2020 Thriftbooks.com Terms of Use | Privacy Policy | Do Not Sell My Personal Information | Accessibility Statement
ThriftBooks® and the ThriftBooks® logo are registered trademarks of Thrift Books Global, LLC