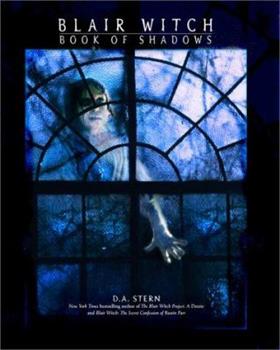 A companion to the movie Blair Witch: Book of Shadows includes an account of the secrets in Jeff Donovan's past, and historical and photographic documents relating to the legend of the Blair Witch.

Fantastic companion which really adds to the movie a LOT!

Published by Thriftbooks.com User , 19 years ago
While the "BW2" movie will probably never gain the same affection in the hearts of the public in the same way as it has with Blair Witch fanatics, this book should help push it a tad more in that direction by explaining a thing or two. Like the previous bestselling "Blair Witch Dossier", it is full of "real" newspaper clippings, evidence, etc. which are both fun to browse through and essential reading for diving even further into the film itself.One of the things I love about both books is that D. A. Stern really develops the characters and allows them to all truly shine. He's really having a blast here, and you can just imagine him putting all this together while giggling to himself and thinking, "Man, is this FUN or WHAT?" I only wish I could have had such an opportunity myself to create something like this for someone.I don't want to give away too much, I'll just list one detail which won't give away any secrets: an excellent example of how this volume doesn't merely "present" the characters but actually adds to their personalities is on pages that are supposed to be Kim Diamond's "Tour Questionnaire" that she filled out when signing up for The Blair Witch Hunt (you recall her, the cool Goth chic psychic). For the following choices, here's how she answered:EMAIL: gothgrrl@coolmail.com (NOTE: Yes, it's fake. -C.C.)OCCUPATION: GeniusSLEEPING BAGS AND TENTS ARE AVAILABLE FOR RENTAL TO ALL OVERNIGHT TOUR GUESTS AT A NOMINAL COST: YOU CAN SUPPLY YOUR OWN, IF DESIRED.[ ] I PLAN TO BRING MY OWN CAMPING GEARI NEED TO RENT A[ ] SLEEPING BAG[ ] TENT(She leaves the above choices blank, and instead writes here "What's a tent?")MEALS ARE INCLUDED IN THE COST OF YOUR TRIP. PLEASE LIST ANY SPECIAL DIETARY REQUIREMENTS IN THE SPACE BELOW:(She writes "Beer".)ANY OTHER COMMENTS?(She answers, "What do we hunt with? Should I bring a gun?")You get the idea. The book is filled with such personality details which really make it all the more believable and make you really want to believe that these characters are *real people* as opposed to mere cyphers set up in a spook film.And now that I look at it, I can't help wondering what the actual actors think of it, especially since this is all using their real names just as with the first movie. I get the impression that they must get a kick out of it all and joke about it quite a bit (I can just see them asking friends, "Do I look particularly DEAD to you this morning?").Whether you enjoyed "BW2" as much as I did or were confused enough to the point that you simply want some answers, check this one out. You'll dig it immensely.Oh, and I do want to mention one last thing. A big one.Again without giving away anything, I do want to clarify something for the cynics of the film concerning the biggest major gripe they've had regarding the movie: yes, you WILL find out within these pages exactly what "The Book of Shadows" is. But that's all I'll reveal. Buy it and you'll see.But in the meantime, I'll be cheerfully singing, "I k

A great companion... is NOT a novilization

Published by Thriftbooks.com User , 21 years ago
Despite what is stated below, this book is in NO WAY a novilization. In fact, it's a great companion piece to the film that really enhances the experience of Blair Witch 2 by providing tons of background details, much in the way the "Curse of the Blair Witch" TV documentary did for the first film. If you want to learn more about the characters of Blair Witch 2 through various "news articles, e-mails, files" and such, this is the place to find copies of those fun items.
Trustpilot
Copyright © 2022 Thriftbooks.com Terms of Use | Privacy Policy | Do Not Sell My Personal Information | Accessibility Statement
ThriftBooks® and the ThriftBooks® logo are registered trademarks of Thrift Books Global, LLC