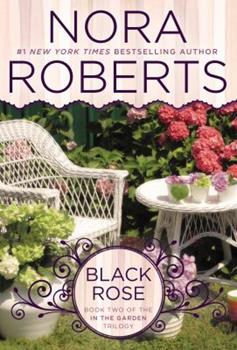 (Book #2 in the In the Garden Series)

#1 New York Times bestselling author Nora Roberts presents the second novel of her In the Garden trilogy, as three women must discover the secrets from the past contained within their historic home... A Harper has always lived at Harper House, the centuries-old mansion just outside of Memphis. And for as long as anyone alive remembers, the ghostly Harper Bride has walked the halls, singing lullabies at night... At forty-seven, Rosalind Harper is a...

if it was as good as the first for sure not started it yet, just finished the first in the series

Published by Pshort , 2 years ago
I could not tell you just am starting the 2nd book tonight or this weekend

Published by Thriftbooks.com User , 13 years ago
Roz Harper is a loving and kind, but fiercely protective of those she loves. When the Harper House resident ghost known as the Harper Bride starts terrorizing those she loves, Roz decides it is time for some answers. The Harper Bride who has never brought harm to anyone in the house before is now pulling all the stops out. Dr Mitchell Carnagie is hired to delve into history to discover what happened in the past. When he sees first hand the terror at the house, he decides immediately to learn more. As he spends more time at Harper House, Mitchell finds himself drawn to Roz. He finds her strength, beauty, and vulnerability to be a potent combination he can't resist. When Mitch and Roz decide to explore their special connection, again the ghost vehemently protests. As more is revealed about the Harper Bride, it is disclosed her name is Amelia. Mitch learns more about Amelia through old books and photographs. The more they all learn, the more disturbing the story becomes. Great second book of the series. I didn't think it was possible, but this book surpassed the first.

A black rose is rare and needs special handling...like Roz.

Published by Thriftbooks.com User , 15 years ago
Black Rose, the second in the In the Garden series, focuses on Rosalind (Roz) Harper; head of Harper House; owner of the In The Garden nursery; mother to luscious Harper (as well as Austin and Mason); close friend of Stella Rothchild; distant cousin by marriage (on her late husband's side) and friend to Hayley Phillips; hot babe; temperamental; difficult. I could go on, but you probably get the picture. Roz is a powerful woman who works at maintaining control of her life. This can be difficult when ex-husband (#2...a mistake), Bryce Clerk, makes a serious effort to make her life miserable. When the situation with the Harper Bride (the ghost) turns very dangerous in Blue Dahlia, Roz decides to hire a professional to find out what's up with the ghost (whose name we learn is Amelia). Enter genealogist, Dr. Mitchell Carnegie, in Black Rose. Mitch's arrival on the scene adds new energy to Roz's life (though she seems to have plenty of that already), some anxiety, and a growing passion for the handsome (of course), brilliant, kindly man who has come into her life. At the same time, Hayley Phillips, who came to Roz about six months pregnant in Blue Dahlia, gives birth to baby Lily, named after the red lilies Harper Ashby (Roz's eldest son) brings to the birthing room just before Lily arrives. There's an underlying sexual tension growing between these two as the story develops and, by the end of Black Rose, the stage is set for Red Lily, Hayley's story. Meanwhile, the ghost continues to act up as Roz and Mitch's relationship heats up. Mitch spends more and more time at Harper House studying journals, photos, and other Harper family records and documents, which upsets Amelia. She has a healthy hatred for men. "They lie. They all lie" (she mind talks to the women). She continues to sing to the young children, whom she obviously adores. As Mitch's research continues, a picture of a woman, perhaps a mistress who gave birth to a child by a Harper ancestor and is then cast aside, begins to emerge. But just what is her problem? Why is her spirit still earthbound? The answer will come, hopefully, in Red Lily. Carolyn Rowe Hill

This Book Rose to the Occasion

Published by Thriftbooks.com User , 15 years ago
The "In the Garden" gang is back, with this novel focusing on the romance between Rosalind (Roz) Harper and Mitch Carnegie. Roz has hired Mitch to research her family history in order to learn the identity of the resident ghost. Widowed at a young age and divorced from a gold digger in middle age, Roz has learned to stand on her own and not to anticipate another relationship. Her otherworldly houseguest couldn't agree more. However, things get steamy as Roz and Mitch develop a genuine attraction. A recovering alcoholic, Mitch has made amends for the mistakes he made as a young man and is ready to move forward with Roz-much to the Harper ghost's distress. Besides the ghost's histrionics and financial attacks by Roz's ex, there's a garden center to be run, and Roz doesn't allow anyone to stand in the way. She is a strong, even bull-headed, character who knows what she's about. The characters that make up the "In the Garden" trilogy are strong and memorable. Roberts continues to fill out the story in the second installment. While people with black thumbs may not appreciate some of the gardening lingo, I find it to be a great metaphor for the process of growth the people in this story go through. I give this book five stars for character strength, easy readability, and a fun plot. "Black Rose" is a worthy successor to "Blue Dahlia," perhaps even better. -C.W.

Published by Thriftbooks.com User , 16 years ago
In Memphis, forty-five year old Rosalind "Roz" Harper for the most part feels good about life mostly because of the young that has brought her family home Harper House back to life. Her "son" David takes good care of the estate. Her In the Garden's nursery manager Stella Rothchild does likewise although the mother of two young sons will probably leave once she weds her beloved Logan. Finally her beloved employee Hayley Philips has a delightful newborn who makes Roz feel like an indulgent grandmother. The two flaws in Roz optimistic outlook are the return of her sponge of an ex husband Bryce Clerk doing what he does best trying to live off someone else with Roz his target and the mystery of the Harper Bride ghost. The former is a question of ignoring him though Bryce keeps pushing; the latter is to much a presence to pretend she is not there so Roz hires genealogist Dr. Mitch Carnegie to look into her past. Mitch quickly becomes a ghost believer even as he falls in love with his reluctant client, who ponders a second chance after the failure of her first attempt at marriage. This paranormal family drama is a Nora that can stand alone but reading the previous novel, BLUE DAHLIA, enhances the experience as the audience will have a taste how far the Harper "extended" family including ghosts has come. The ensemble cast seems genuine and clues to the mystery of the ghost augment the novel. Nora Roberts is at her best with the first two novels of the Garden trilogy leaving readers to anticipate quite a finish to the miniseries. Harriet Klausner

Published by Thriftbooks.com User , 16 years ago
Do you think it's true that every house has a secret? If the walls could talk would you want to hear what they had to say? The Harper House in this story could certainly tell you a few things. We meet Roz, descendent of the owners of the Harper House, where she now resides. Recently divorced, she is a likable perky, wealthy woman in mid-life, searching to find answers to some hidden happenings in her home. It seems Harper House has had a ghostly residence for years; a young woman who sings to the newborn and has stayed in the shadows until recently. Her gentle presence, which was tolerated through the years, is now turning into rage and violence; nearly taking the life of Roz and endangering her entire household. Who is this woman and why will she not leave the house? Why has she turned from gentle to savage and how is she connected to the family? Chilling questions for sure; and you will devour the book to find out the answers. The author does a wonderful job in story and character development in this novel. She allows you to know the main players, draws you into their personal lives and emotions and uses this as building blocks to the danger and mystery that surrounds them. Ms. Roberts adds some romance and humor which makes the work a comfortable read without losing it's mysterious element. I found this book to be outstanding. a real page turner and one that I can highly recommend
Copyright © 2020 Thriftbooks.com Terms of Use | Privacy Policy | Do Not Sell My Personal Information | Accessibility Statement
ThriftBooks® and the ThriftBooks® logo are registered trademarks of Thrift Books Global, LLC