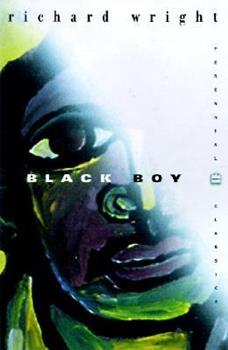 Black Boy: American Hunger a Record of Childhood and Youth

With an introduction by Jerry W. Ward, Jr. Black Boy is a classic of American autobiography, a subtly crafted narrative of Richard Wright' s journey from innocence to experience in the Jim Crow South. An enduring story of one young man' s coming off age during a particular time and place, Black Boy remains a seminal text in our history about what it means to be a man, black, and Southern in America. Superb...The Library of America has insured that...

Published by Thriftbooks.com User , 5 years ago
Unable to discern the fictional parts, it did not matter to me. No wonder Richard chose the paths he did. This young boy was beat and slapped and told to shut up so much, a wonder he learned anything growing up! I do understand this was a different time. To continuously be knocked down, beat down, told how stupid and fool he was..... I could only IMAGINE how all if this made this young child feel.

Published by Thriftbooks.com User , 16 years ago
coming to wright as an adult, i was stunned by the powerful combination of his words and james' voice to listen to this book is to be given a rare opportunity to truly appreciate the pain of another person, and to appereciate their life experiences some may be dismissive today of the relative lack of black achievement in american society when they say 'hey, slavery ended in 1865. get your act together already!' but by reading/hearing a book like this, you can truly deeply feel the profound destructive power of the jim crow life you can vicariously live through the poverty and hunger of wright's childhood and the narrator's presentaiton delivers it all so profoundly and effectively highly recommended

Published by Thriftbooks.com User , 19 years ago
Several years ago, I was assigned the first half of this book in an American History class. I sat down expecting it to be only mildly interesting, but by the end of the first chapter I was hooked. I read the whole thing straight through, from cover to cover, in about sixteen hours, furiously scribbling notes on every page. The narrative itself is vivid and compelling, and the style, structure, and ideas in Wright's autobiography subtly echo a fascinating variety of sources, from slave narratives to contemporary sociology to classic British coming-of-age stories (such as Gosse's "Father and Son" and Butler's "The Way of All Flesh"). The book is written in two parts. The first half details Wright's hardscrabble existence and deeply unhappy childhood in the rural & urban South. He is bullied & abandoned by his feckless father, tormented by his sadistic uncles & aunts, taunted & ostracized by his resentful schoolmates, and patronised & menaced by most of the whites he meets. Throughout all these depressing experiences, Wright perserveres in educating himself and planning his escape North. (One thing I learned from the book is how determined Southern whites were to prevent blacks from moving North and trying to better themselves: Apparently, many whites had some weird psychological need to keep a people they despised close at hand for perpetual abuse!) The second half of the book details Wright's escape north to Chicago and his brief, bizarre career there as a Communist Party organizer and propagandist. As in Ralph Ellison's great novel "Invisible Man," our protagonist finally realizes that the Communists don't give a damn about improving blacks' wretched condition--in fact they want to aggravate blacks' misery in order to exploit it for political gain. The great disillusionment comes for Wright when an escaped lunatic arrives at CP headquarters and successfully impersonates a high-ranking party official. In short order, the impostor turns everyone viciously against each other and the true back-stabbing nature of the CP is revealed to Wright. He quits in disgust and sets out on his own to become a free-lance professional writer. Wright's character, as revealed in this autobiography, inspires (in me, at least) admiration for his courage & ambition, annoyance at his contempt for other blacks (the only positive black character is Wright's mother), and ultimately sympathy for a difficult but essentially decent fellow. His vividly detailed account of the constant humiliation and fear suffered by blacks in the Jim Crow South is unforgettable. His insightful depiction of the way blacks often internalized white racism and turned on each other is heartbreaking. I am very glad my professor assigned this book.

Published by Thriftbooks.com User , 20 years ago
When I first picked up this book all I thought was just another reading assignment. However, Black Boy by Richard Wright affected me in ways no book ever has. This book is a touching autobiography describing the life of a young African American boy who struggles to find himself in such a prejudice society. He overcomes obstacles of religious, racial, and cultural segregation in the 20th century United States. During Richard's childhood, he faced many hardships with his family because of their low income, lack of a father figure in his life, and being raised in such a racist society. As he grew older the racism only continued to get worse and Richard began to learn how to cope with his surroundings. Whether with jobs or schooling, he began to alter his lifestyle to accommodate the changes of his environment. This book is an integral depiction of what American society was like during this time period. The hardships and injustices that the African American race faced each day has become a significant part of our history. All of the incidents that occurred in this book represent the struggles that African American citizens did their best to conquer each and every day. The harsh and unjust treatment of African Americans is revealed through the author's own life experiences, all of which are reflected in Black Boy. I found this book to be one of the best books I have ever read. It touched me and saddened me to know that this was a part of my history as an American. In comparison to a few books I have read about segregation, I have found Black Boy to be the most personal. This is because the way the author expresses the sentiment of human emotions and the intimate details of characters thoughts and beliefs. I would definitely recommend this book for those who are interested in the racial progress of our country.

A Classic That Must be Read

Published by Thriftbooks.com User , 20 years ago
In my quest to either reread or read the first time some of the timeless classics by African American writers this year, I tried to avoid reading this one. I just wasn't up to reading about another downtrodden, poverty-stricken, living in the ghetto story. But it is more than that. This masterpiece is a commentary on a way of life in the early part of the 1900s, a life that many African Americans endured and survived coming through victorious. Richard Wright recalls his poverty-stricken childhood, abandoned by a father, and physically abused and misunderstood by the adults in his life. Uncomfortable among his own people, he didn't fit in with the lifestyle of the blacks in his life nor could he abide the Jim Crow shuffling he had to do with whites. He found he could not compromise his values and knew he had to leave the south. The poverty was startling yet he chose to go back to live with his mother and grandmother when he could have stayed with an uncle where there was plenty of food.With only an nine grade education, he was self-taught, reading and disciplining himself to pursue what he wanted most, to write. And write he did. He wrote stories and had them published when he was still in school and when he moved to Chicago he wrote for the Communist Party. With the Party, Wright thought he had found his niche, but again, he was the odd man out never conforming to their ideals. As I read I kept saying, this is enough already. The poverty, the abuse, the Jim Crow and racism was a wearing me down. But this was a man who rose above his circumstances to have a life that was worth pursuing and living. I am intrigued by this man and his life and look forward to reading his most recent biography.

I Could Thoroughly Relate

Published by Thriftbooks.com User , 21 years ago
Like Richard Wright, I spent my teenage years reading only "classic" novels and therefore skipped over "Black Boy", which I assumed wouldn't be substantive enough for my tastes. Now that I've read it years later, I'm regretful that this stunning memoir wasn't a part of my consciousness when I was younger.This is a story of racial dissonance-- and how horrifying it is to see the lengths that whites would go to to abuse and humiliate emancipated blacks!-- but it is also a story of a brilliant young man whose voice crosses racial bounds. I could identify with him completely, and I have little patience with those reviewers who've described him as "whiny" or "negative" or "hateful." I know what it feels like to grow up in a rural town and have people try to break you for having aspirations. I know what it's like to "feel and cultivate feelings" while others strive for "the trivial material prizes of American life," and I know that justifiable distrustfulness and resentment are not to be confused with hate.Most importantly, I know what it feels like to try to escape one's oppressive roots. The pain in this story was so real for me that I cried my way through many, many passages."Black Boy" should come as a revelation to black persons, white persons (like myself), and anyone who has ever hungered for their life to mean something more.
Trustpilot
Copyright © 2022 Thriftbooks.com Terms of Use | Privacy Policy | Do Not Sell or Share My Personal Information | Accessibility Statement
ThriftBooks® and the ThriftBooks® logo are registered trademarks of Thrift Books Global, LLC