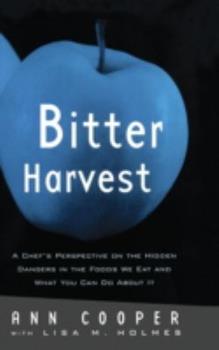 Bitter Harvest: A Chef's Perspective on the Hidden Danger in the Foods We Eat and What You Can Do about It

First Published in 2000. Routledge is an imprint of Taylor & Francis, an informa company.

Published by Thriftbooks.com User , 13 years ago
This book focuses on sustainability, safety, and nutrition in the food we eat. There are a lot of players that have an impact on the food that shows up in the grocery store: agribusiness, the government, seed companies, chemical companies, and farmers. This book focuses on the interplay of these groups and the impact they have on our food. Organic farming is featured heavily throughout. Some highlights include: Turkeys are now bred to be so large that they can no longer mate and need to be artificially inseminated. Chicken is consistently infected with salemolla and the "solution" in your bagged chicken contains bleach. Beef cattle are fed antibiotics, not because they're sick, but so they grow faster. RGBH hormone is being used to reduce corporate costs and put small milkers out of business. Nutrition in fruits and vegetables has been declining since the 70's because of corporate farm practices. Out of season produce is burning up tons of fossil fuels and imported produce may be treated with pesticides that are illegal in the United States. A lot of good political stuff here about the food industry. Giants like Monsanto and ADM throw their weight around with resulting negative impact on the safety and nutrition of our food. This was written in 2000 when the national organic standards were still in a state of flux. Since then they have passed, it would be interesting to hear weather or not the author finds them satisfactory. Recommended for Parents, teachers, students, farmers, or anyone with an interest in the food industry.

Published by Thriftbooks.com User , 17 years ago
Sad thing is, this keeps popping up as an issue, what is happening to our precious supply of fabulous fresh foods, that truly sustain and delight. Even if poor, you can enjoy a fabulous dish of fresh steamed green beans just off the vine.My grandparents were "poor", no money but they were farmers and enjoyed lots of good things that sustained life, joy, peace and hope. It is truly disgusting to think 80 percent of fresh chicken has samonella and who knows what else and so many do not know how to protect themselves from getting sick on it. Everything in the supermarket case looks pure and perfect, cool and fresh. Oldways preservation in Cambridge has kept up the searching spotlight and many chefs are well informed but work so hard, they have little time to educate the public. Thank you Ann Cooper for your experience and insights!Sally LaRhette

Published by Thriftbooks.com User , 18 years ago
Bitter Harvest is a wonderful book. It highlights the importance of natural foods vs. the artificial foods we eat. However, this is a distinction NOT between junk food and vegetables, but agribusiness vegetables and local organic vegetables. It turns out that, in search of the maximum profit, the massive agribusinesses engage in pratices that make vegetables much less healthy, and, in some cases, toxic. Since allowing land to fallow and regain its nutrients reduces profits that could be generated from using that land, agribusinesses use the same land over and over again, and pump it full of chemicals to try to restore the nutritional content of the soil. This is not some wild claim, it is simply how agribusiness works according to their own information. As a result, many vegetables are becoming less healthy and less nutritional. For instance, a USDA report comparing American broccoli between 1975 and 1997 shows that it has decreased in many important nutrients: broccoli in 1997 had 53% less calcium, 20% less iron, 38% less Vit A, 17% less Vit C, 35% less thiamin, 48% less riboflavin, and 29% less Niacin than 1975 broccoli. Additionally, food that is transported loses nutrients over time. Our vegetables travel an average of 1500 miles. Unfortunately, thanks to NAFTA and GATT, our vegetables can be toxic. Mexico currently does not ban at least 6 pesticides that are banned due to health effects in the USA. Why does this matter to us? We get most of our off-season vegetables from Mexico: 97% of tomatoes, 93% of our cucumbers, 95% of our squash, 99% eggplant, and 85% of our strawberries. We are eating the poisons Mexico allows in its food. The news is not all bad, and this book is largely a celebration of life, food, and nature. Above all, it stresses the need to find food sources that don't use the damaging practices of agribusinesses and are not far away-local organic farms. According to Consumer Reports Jan 1998 issue, "organic foods consistently had the least toxic pesticide residues." Similarly, it is more nutritional. Organic Corn has 20 times the calcium and magnesium of store corn. There are many more nutrients and vegetables listed. And so, to question an earlier reviewer, who found it "really hard to figure out why any of it matters"--are you concerned about eating poisons and pesticides? Are you concerned about declining nutrient levels in our vegetables? If you are, then this book matters. In fact, it is difficult to imagine anything mattering more than what we eat and the damage it may cause.

Published by Thriftbooks.com User , 20 years ago
This book is a must read for anyone who cares about the food they put into their bodies. It is definitively NOT a cookbook, nor does it make an attempt as such--the other reader from New York clearly did not read this book!

Published by Thriftbooks.com User , 21 years ago
This book should be read by every parent in America who goes to the grocery store and buys food. We have become a nation of "put it in the basket" buyers. This book cuts to the core of what is wrong with American food. KUDOS for a job well done.
Copyright © 2020 Thriftbooks.com Terms of Use | Privacy Policy | Do Not Sell My Personal Information | Accessibility Statement
ThriftBooks® and the ThriftBooks® logo are registered trademarks of Thrift Books Global, LLC