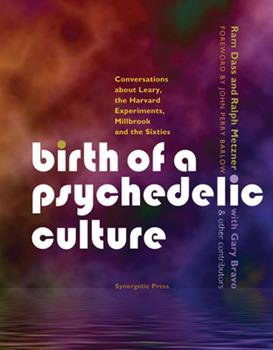 Birth of a Psychedelic Culture: Conversations about Leary, the Harvard Experiments, Millbrook and the Sixties

No understanding of the history of the sixties could be complete without a grasp of the work of Leary, Alpert, and Metzner, the cultural resistance to their experiments, and the way in which psychoactive drug use became a part of contemporary society. Next Generation Independent Book Awards Finalist, Birth of a Psychedelic Culture explores these experiments and their cultural milieu through never before seen photographs, personal accounts of authors...

Published by Thriftbooks.com User , 12 years ago
Always controversial, sometimes naïve, but never boring was the 1960s paradigm shift in consciousness brought on primarily by the newborn psychedelic subculture. Its emergence was coaxed by the midwives of this movement, Richard Alpert (Ram Dass) and Ralph Metzner, and recently discussed by them in an extended interview by the author, psychiatrist Gary Bravo. These conversations cover their collaboration with Dr. Timothy Leary in his experimentation with psychoactive drugs that began at Harvard University and expanded to various international locales. Filled with previously unpublished photographs and letters, this book also contains first-person accounts by people from diverse strata of society who participated in guided drug sessions or lived communally at the legendary estate in Millbrook, N.Y. There are times where the contents of //Birth of a Psychedelic Culture// veer off into excessive dramas of interpersonal conflicts. Numerous redundancies are also present and could have been avoided with better editing. Accolades, however, should be accorded these explorers of consciousness for their insightful philosophy concerning the character of mind-altering substances and their role in surpassing cultural indoctrination. Ultimately, this book puts the work of Professors Leary, Alpert, and Metzner into the historical context it deserves by depicting how the use of hallucinogens became an indelible part of today's world. Reviewed by Richard Mandrachio

A piece of history well worth looking into, with its stories of a truly unique time

Published by Thriftbooks.com User , 12 years ago
Science calls for experimentation, and when something new appears, scientific thinking can lead to a unique adventure. "Birth of a Psychedelic Culture: Conversations About Leary, the Harvard Experiments, Millbrook, and the Sixties" looks into a six year span where the psychedelic movement caught steam. Presented as a conversation between figures of the movement, the authors provide an enticing read into the era. "Birth of a Psychedelic Culture", is a piece of history well worth looking into, with its unique stories of a truly unique time.

An Engrossingly Interesting Account of the Seed of Psychedelia

Published by Thriftbooks.com User , 12 years ago
Great for those who lived through it, and those just beginning their intrepid travels. Highly recommended to anyone curious about the roots of the current psychedelic culture. A fantastically informative read!

Published by Thriftbooks.com User , 12 years ago
An enchanted treasure chest, overflowing with insightful new dialogues, fascinating and little-known anecdotes, valuable historical accounts, rare photos, and other never-before-published material about the origins of modern psychedelic culture--by the people who helped to create it. Absolutely mesmerizing, and difficult to put down, this exciting book expanded and enriched my understanding of how Harvard's legendary psychedelic research team turned on the world, and beautifully preserves this largely unknown information for future generations. Birth of a Psychedelic Culture fills an important niche in the documentation of psychedelic history, and it sparkles with precious insights and illuminating wisdom.
Trustpilot
Copyright © 2022 Thriftbooks.com Terms of Use | Privacy Policy | Do Not Sell My Personal Information | Cookie Preferences | Accessibility Statement
ThriftBooks® and the ThriftBooks® logo are registered trademarks of Thrift Books Global, LLC