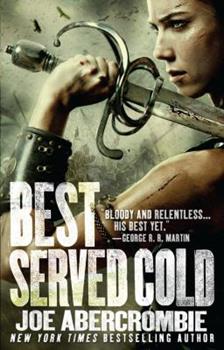 Springtime in Styria. And that means war. There have been nineteen years of blood. The ruthless Grand Duke Orso is locked in a vicious struggle with the squabbling League of Eight, and between them they have bled the land white. While armies march, heads roll and cities burn, and behind the scenes bankers, priests and older, darker powers play a deadly game to choose who will be king. War may be hell but for Monza Murcatto, the Snake of Talins, the...

Published by Thriftbooks.com User , 12 years ago
Joe Abercrombie's BEST SERVED COLD is a bloody and relentless epic of vengeance and obsession in the grand tradition, a kind of hard-boiled fantasy noir The Count of Monte Cristo (Penguin Classics). His cast features tyrants and and infamous icons including the world's greatest poisoner and his favored apprentice, a mystical numerology obsessed serial killer, a red-handed warrior from the frigid north, a clandestine operative with skills ranging from espionage to torture and a blood-soaked mercenary captain with a infamy stretching across half a continent. And those are the good guys. Monza Murcatto, the Snake of Talins, once a infamous and celebrated general of a ruthless legion of mercenaries and now betrayed servant of vengeance leads this host of very dark anti-heroes on her personal vendetta with grim determination. Many of those included her dark band will be recognizable to fans of Abercrombie's previous First Law series. If you have not read those works, grab The Blade Itself (The First Law: Book One) before getting Best Served Cold. The prose is potent, the humor is dark and delightful, the battles are vivid and visceral, the action brutal, the characters dynamic and compelling, the pace headlong, and Abercrombie piles the betrayals, reversals, and plot twists one atop another to keep us guessing how it will all come out. The authors descriptions and visuals almost leap out of the page and his characterization and storytelling are not only the best in the the current crop of new fantasy authors but one of the best in genre. Part Alexander Dumas and part George RR Martin, Abercrombie's tale of Monza Murcatto on her nation-spanning arc of retribution is a magnificent experience both sinister and sublime. You will not be disappointed.

Published by Thriftbooks.com User , 12 years ago
With Best Served Cold, Abercrombie has achieved an even higher level of brilliance than his First Law trilogy, solidly placing himself in the upper echelons of fantasy writers today. What is, quite frankly, a very simple plot, is made excellent by the many unexpected twists readers of the First Law trilogy will have come to expect from Abercrombie. The most astounding aspect of Best Served Cold, however, is Abercrombie's characterization, which is second-to-none in today's fantasy market. Not one of the several POV characters is at all lacking in depth, and some develop almost more than should be possible in a single 500-some page book. Also, First Law fans never fear, your first thought following the book's conclusion will not be "Huh? Is there going to be a 4th book?" Closure is in store for you. Abercrombie has done it again. And now, I will (again) await his next work with bated breath.

Not for the Squeamish

Published by Thriftbooks.com User , 12 years ago
Best Served Cold has to be the most anticipated Fantasy read this year. As soon as I got my greedy hands on it I just had to start. All the fervor over the cover design doesn't matter in the end. It is the pages between the cover that counts and that is truly entertaining. Abercrombie is building on the world he started with The First Law Trilogy although centering it on parts not visited prior, namely Styria and it related nations. Yet it differs from First Law in that it is a much more personal story. He does include a couple minor characters from First Law although they grow much from what they start as. As the title suggests revenge is the driving force. Monza Murcatto is Grand Duke Orso's most trusted general who has won him many battles, but now he feels she has become to popular and will try to usurp him. Orso has Monza's brother Benna killed and nearly her as well in an incredibly detailed account of her literal fall from his graces. After Monza heals (partially) she begins gathering a group to help get revenge upon those who killed her brother. Abercrombie has done a superb job creating another stellar cast of characters you just love to hate and hate to love along with the most gritty action that could be wanted. Surprisingly, I found the most redeemable character in Friendly, who is a cold blooded killer with an utter fascination for numbers. Although unlike most of the other characters he is very straight forward with his dealings and is perhaps left the most untwisted in the end. Abercrombie still manages a fine balance of well realized characters, believable dialogue with a detailed world while also masterly offering twists and turns to the plot and characters. Abercrombie has been known to do some vile things to and with his characters and he certainly rides the edge just enough not to turn most readers off with some of his characters predilections most notably involving Monza and her brother's past as well as a certain Duke's sexual interests. Having said that this is definitely not a book for the prudish or squeamish. Overall, I found the style and format very similar to Lynch's The Lies of Locke Lamora. It is very much a series of capers; however the goals don't involve money, but rather killing. Only the characters aren't lovable rogues (except Cosca) like in TLoLL, but rather some of the most notorious murderers and back-stabbers in the world. Have no doubts that Abercrombie is still cruel to his characters. If anything he does worse to them here than in First Law. There are no happy endings in an Abercrombie book and there never should be. Best Served Cold is meant as a standalone and newcomers will definitely find it open enough without having read prior volumes yet fans of First Law will be reward for their knowledge of the world and appreciate the little things and some surprise appearances from other characters. I give Best Served Cold 9 out of 10 Hats. Abercrombie has left a few holes open and secrets unrevealed that

Published by Thriftbooks.com User , 12 years ago
When the infamous mercenary captain, Monza Murcatto, seems to be getting too powerful, her employer, Duke Orso, attempts to have her and Benna, Monza's next-in-command, killed. Short work is made of Benna, but, by a cruel twist of fate, Monza survives, just barely. And her quest for vengeance sets a spark to the powder-keg that is the country of Styria during the Years of Blood. Best Served Cold is a stand-alone novel that takes place in the same world as Joe Abercrombie's acclaimed The First Law series. To his many fans (of which I'm certainly one), I say: you'll be more than pleased with Best Served Cold. Along with a colorful array of new characters -- criminals, henchmen, assassins, power-hungry nobles, and mercenaries -- several of the second-string characters from The First Law play a major part. I'd list them, but half the fun of this book is guessing just who will show up. I will just give you this much: if you liked the despicable soldier-of-fortune Nicomo Cosca before, or maybe even if you didn't, you're gonna love him in Best Served Cold. Mr. Abercrombie's stories have been called "fantasy noir" and I can't think of a better description. Think Quentin Tarantino or Guy Ritchie doing a fantasy movie and you just about have the right idea. Mr.Abercrombie's First Law and Best Served Cold has edginess, a multitude of criminals, raw and gritty dialogue, horrifyingly realistic violence, and dark humor. Best Served Cold drags the reader along on Monza's grim and unyielding vendetta which in turn ignites vengeful repercussions that only throw other deadly events into motion. It was fascinated to watch how one person's obsession can drag so many others down with it and how once someone starts down a dark path, their whole self-concept can change. But, there's no need to lose heart in the darkness. There just may be (according to the individual reader's interpretation) a small ray of light at the end of the tunnel. I do feel compelled to warn that Abercrombie may be too dark for some readers, and the sexual content is raunchy -- but it is on par with the tough, roguish characters. I almost knocked off a half star for this, but the ending more than made amends.
Trustpilot
Copyright © 2022 Thriftbooks.com Terms of Use | Privacy Policy | Do Not Sell My Personal Information | Accessibility Statement
ThriftBooks® and the ThriftBooks® logo are registered trademarks of Thrift Books Global, LLC