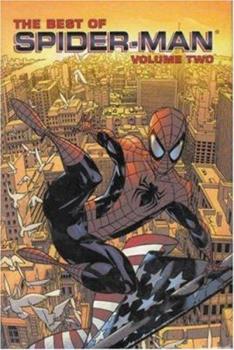 The second volume of Spider-Man's greatest moments picks up where Volume I left off, collecting the best stories from three Spider-Man series. Volume II features stories written by J. Michael Straczynski, creator of Babylon 5 and Spider-Man's most popular writer.

Published by Thriftbooks.com User , 14 years ago
Hard to go wrong with JR Jr. A small dose of Spider-Man now again is not too bad. The problem I have with this is the style, it leans towards the MacFarlane end of crazy bendy Spider-Man, as opposed to his work on X-Men. I hated that stuff then, and I still don't like it a lot now, but Romita is good enough to pull it off and not annoy me as much.

Published by Thriftbooks.com User , 15 years ago
The Best of Spider-man, Volume 2 collects Amazing Spider-man #37-45 (Vol.2 & 3 of the series' Trade PaperBacks), Peter Parker: Spider-man #44-47 (Return of the Goblin TPB), and Spider-man's Tangled Web #10 & #11 (from Vol.2 of the TPB). Amazing Spider-man: the issues continue J. Michael Straczynski's run; I really like what he did with the characters. Aunt May has discovered that Peter is Spider-man, and her reaction and struggle to accept his dangerous life was very well portrayed. Straczynski also writes Peter Parker amazingly well; everybody has their own idea of how their favorite characters should act, but I really enjoy this author's work. Peter Parker: Spiderman: I wish I had read some of the earlier issues or TPB's of this series because #44-47 drops you right into the action. Peter has to deal with Norman Osborne/Green Goblin once again, and while the action and character portrayals were good, they weren't perfect. Number 47 ends with the two returning to their uneasy stalemate. Spider-man's Tangled Web #10: This was a really awesome one-shot. Told from the point of view of two kids who are watching a superhero show when...; well, I don't want to ruin the story, but I really recommend this one; written and drawn by Kaare Andrews. Spider-man's Tangled Web #11: Written and drawn by Darwyn Cooke, a nice story of Valentine's Day in Spider-man's world. This is a good collection; I would recommend it to anyone who wants to read the main book, Amazing Spider-man, and would like to try out some of the other Spider-man titles.

Published by Thriftbooks.com User , 19 years ago
Here, in one loaded volume, are some of the best told stories of any kind, in the last year. Whether these stories were told in comics, film, novels or television, very few matched this level of excellence.Seriously. The script/screenplay/text and the art/cinematography/visuals I would put up against any type of media this year, or the last.This represents a great value, as you get quite a few issues in a handsome volume.The now-famous "issue 36" should be mandatory reading for anyone with at least one eyeball. It could possibly be the single best artistic/creative response to September 11th seen yet. There are images in the story as haunting as any from the site itself.This is a book you'd be proud to own. And if this happens to be your first dip into modern comics, I envy your upcoming experience.
Trustpilot
Copyright © 2022 Thriftbooks.com Terms of Use | Privacy Policy | Do Not Sell My Personal Information | Accessibility Statement
ThriftBooks® and the ThriftBooks® logo are registered trademarks of Thrift Books Global, LLC