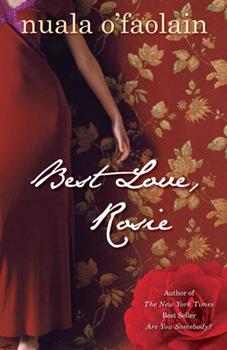 A final novel from the beloved Irish writer, Nuala O'Faolain. Best Love, Rosie , she said, ..".is the book of my years of commuting between the melancholy of Ireland and the optimism of America." Like many a modern, well-travelled woman, Rosie has lived a fascinating life, full of adventure and the pleasure of many lovers in her younger years. Now, facing the challenges of middle-age, she finds the things that defined her most --- work, love, independence...

A poignant meditation on midlife and Irish life

Published by Thriftbooks.com User , 11 years ago
I enjoyed (for the most part) ARE YOU SOMEBODY? and thought the author had a distinctive voice and sensibility. I have relished BEST LOVE, ROSIE--it's an intelligent, nuanced look at the inner life of an Irish woman in her mid-fifties trying to understand her place in the world, including her hometown and her ancestry. The meditations on what it means to get older, the funny and all-too-true observations on American/Americans and our self-help literature, the insights into the regrets and second thoughts that come in later life, the memorable and lovingly drawn characters, and the sense of Irish place all make this a great story. I was intrigued and interested in Rosie and her pals and Min, her surprisingly adventurous 70-year-old aunt, all the way through. This is a book that really does capture the mysteries of the way we humans behave--self-absorbed, loving, frisky, bitter, stubborn, sorrowful, joyful.

Published by Thriftbooks.com User , 12 years ago
'Rosie' has come back to Ireland from her career in 'Europe' to look after her depressed aunt/foster mother - who is in her 70s. She ends up rooting back into the family's history - looking for attachment and belonging. Meanwhile, her aunt takes off to America - where she has a sort of 'Tir na nOg' experience. `Aunt Min' rediscovers her vigor and throws herself back into her life. These are recurring themes for O'Faolain: life in Ireland vs America and the role of the middle-aged, childless woman in those societies. O'Faolain's writing is just so pleasurable: the sentences are little threads of beauty. Her descriptions of people, places and feelings are worldly, yet very 'Irish'. Most of all, I love her humour in this. Rosie decides to write a self-help book and her emails to her publisher (an old friend) are great comedy. She starts off by telling him how someone gave her a book for Christmas which helps you to live your life. It's by a `Celtic' priest - who she accompanied on a protest once! (I think this has to be John O'Donohue) Maybe she could write something similar, she figures, in a `if he can do it, surely so can I' sort of way. There's lots of satire on the vagaries of the publishing world here! To counterbalance this comedy, the Rosie of this story is very much the Nuala O'Faolain of the autobiographies ('Are you Somebody' and 'Almost There'). They were tough reads, chronicling a loveless childhood and the resulting unfulfilled life, with gut wrenching honesty. Though stark, these were hugely popular for the voice they gave to countless readers in similar situations. This book is bleak too at times, but it is not as raw and angst ridden. It's like O'Faolain has started to make her peace with her life and the sadness gives way to lightness, fun, feeling and reflectiveness. This, of course, makes it all the more poignant and sad. O'Faolain wrote the introduction to the book in January 08 - only a couple of months before she died after a short, shocking, unexpected illness. Her radio interview with Marian Finucane from that time can be found here: [...]
Trustpilot
Copyright © 2022 Thriftbooks.com Terms of Use | Privacy Policy | Do Not Sell My Personal Information | Accessibility Statement
ThriftBooks® and the ThriftBooks® logo are registered trademarks of Thrift Books Global, LLC