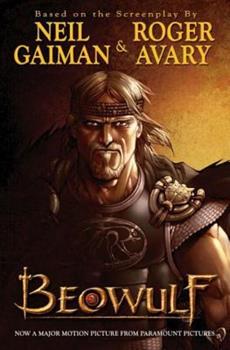 A special adaptation of the big-screen retelling of the ancient myth from filmmakers Neil Gaiman, Roger Avary and Robert Zemeckis In the sixth century, the warrior Beowulf must do battle with the monster Grendel as well as Grendel's mother and a dragon who has a personal connection to the Scandanavian warrior. Adapted by Chris Ryall and Gabriel Rodriguez (Clive Barker's The Great and Secret Show).

Published by Thriftbooks.com User , 13 years ago
From the depths of my memory the name Beowulf rings a bell after seeing the movie trailer inside the darkened theater and I told myself that I'll watch that movie when it opens in theaters but sad to say, due to time constraints (because I wanted to read the original epic translation of Beowulf first before watching the film version) I somehow missed it and worse, I couldn't find the original epic book version. But it looks like the heavens are with me because an officemate gave me this movie-tie in book version by Caitlin R. Kiernan as a belated birthday gift (to you who gave me this, thank you!). I was planning to read this last November 2007 but I kept putting it off maybe because it wasn't the original translation and because I didn't get to see the movie the whole three weeks it was showing in theaters. It was only during the Christmas break that I finally got around to reading it because of the fact that I have nothing new to read and I remembered I still have Beowulf gathering dust as he waits for me to remember, go back to and get to know him. Having zero knowledge about what the epic Beowulf is all about except for the fact that he is some country's long forgotten hero and the fact that his song is in the list of the world's best literature that my high school English teacher enumerated with such a brief description it completely slipped off my mind and was easily relegated to the darkest recesses of my memory. Of course, I'm too lazy to Google it at that time (because what I might read on the net might ruin the suspense for me) and, like I said before, I'd like to be surprised and be entertained when I read a story. My journey with Beowulf started on December 28, 2007 and ended just last January 1, 2008 and though I could have read the novel in the span of one day, I didn't gobble it up like I usually do and I don't know why I prolonged the agony of suspense. It was indeed a memorable journey for me because ever since my teacher enumerated that list of the world's best literature, I wanted to own every book listed there and now at least two of them are mine now. Beowulf is a Geat who sailed the seas towards the kingdom of King Hrothgar with fourteen men with him, warriors all of them, when it has been said that King Hrothgar's kingdom is cursed by a demon. They journeyed on despite bad weather and towering walls of water in the hopes of finding glory if they survive because their names will be sung until the end of time or to die gloriously in battle and earn a seat at Odin's Valhalla at Asgard rather than to die of old age. Beowulf thought the real monster was Grendel but King Hrothgar, Queen Wealthow, and Unferth knew better and later Beowulf finally understands who the real monster is but then it is already too late for such realizations or regrets as it usually is the case with regrets always coming in the end. It is a great story and it does deserve its place as one of the world's best literature but then, I still

Published by Thriftbooks.com User , 14 years ago
Personally, I very much enjoyed this novelization. The departures from the orignal "epic" poem were quite interesting and well written, and definitely kept me hanging on. The intense action scenes and vivid descriptions lend themselves well to the mind's power to invision the author's intentions. Though this is not her "typical" work (as it is such an understatement to call her work "typical" in any reference), still a success for Kiernan.

Published by Thriftbooks.com User , 14 years ago
Adapted from the film screenplay of Neil Gaiman and Roger Avary, "Beowulf" is the graphic novel adaptation of the major action/adventure film released by Paramount Picture and is the story of how a legendary Scandinavian warrior of the sixth century sought out and fought the man killing monster Grendel, Grendel's horrific mother, and a gold hoarding dragon. A timeless tale of honor, loyalty, love, and betrayal, "Beowulf" is a true classic that is perfectly adapted to the graphic novel format by writer Chis Ryalo, artist Gabriel Rodriguez, and a team of support that includes colorist Jay Folos, letterer Robbie Robbins, editor Justin Eisinger, and book designer Neil Uyetake. Flawless production values and an inherently gripping story combine to make "Beowulf" an enthusiastic recommendation for personal and community library Graphic Novel collections.

Published by Thriftbooks.com User , 14 years ago
Kiernan has provided a fine retelling of the Beowulf saga. While it is based on the Gaiman screenplay, she has obviously pulled from many other source materials, including the original, to create a fresh view of an old and fascinating story. It is certainly not a 'cliff's notes' version - if that is what you want you should go buy some 'cliff's notes'. This is a dark, gritty and magical world not seen since "Grendel" by John Gardner. Like her other original works, this novel speaks to the hero and the monster in us all.

The comic made from the movie

Published by Thriftbooks.com User , 14 years ago
It's an exciting, readable, visual telling of the classic story. It has all the heroic essentials, including manly combat, seductive but evil beings (guess where Angelina Jolie comes in), terrible monsters, sword-swinging, and lots more. If you're already eager for the movie to come out, this appetizer gets your taste up for it, making you want that coming movie even more. Hey, that's the job it's supposed to do (in addition to lifting a few more bucks from your pocket). Good story, good art, and an interesting connection to super-hero stories a thousand years old. My sister in law teaches medieval English lit - she even had a dog named Beowulf. She won't like it. It's not true enough to the original story. It's too cartoony. It's not respectful of the tradition. It doesn't take the serious story seriously enough. Well, she doesn't read comics anyway. I like the fact that it puts the old stories in front of new audiences, something that probably wouldn't have happened without a fair bit of modern retelling. That's true to the original oral tradition though: retelling it again for each new generation, keeping it alive and relevant as the world changes around it. And who knows, maybe this will stir a few readers to hunt down a traditional version (I recommend Beowulf: A New Verse Translation). Would that have happened without the popularized redering? -- wiredweird
Trustpilot
Copyright © 2022 Thriftbooks.com Terms of Use | Privacy Policy | Do Not Sell My Personal Information | Accessibility Statement
ThriftBooks® and the ThriftBooks® logo are registered trademarks of Thrift Books Global, LLC