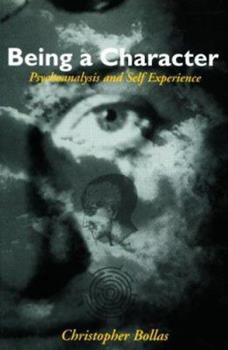 Being a Character: Psychoanalysis and Self Experience

Each person invests many of the objects in his life with his or her own unconscious meaning, each person subsequently voyages through an environment that constantly evokes the self's psychic history. Taking Freud's model of dreamwork as a model for all unconscious thinking, Christopher Bollas argues that we dreamwork ourselves into becoming who we are, and illustrates how the analyst and the patient use such unconscious processes to develop new psychic...

Published by Thriftbooks.com User , 21 years ago
This is a deceptively dense book, full of complex psychoanalytic theory and practice, which conveys essences of this work in ways that are poetically and evocatively moving. "Being a Character," the title and the concept, is all about the subject's ability to elaborate itself through the use of the evocative object - that which evokes aspects of ourselves which may yet have gone unexpressed. Bollas brings the psychoanalytic process and the process of generative and creative living to vivid life. His many descriptions of the seemingly infinite details that can occupy an analyst's mind, and the moving nature of these apprehensions, demonstrate in example and form the very ideas he is presenting."...Character" paints a living picture of what it is to be a subject with an ineffable unconscious that must nevertheless be brought into unfolding expression and experience of one's being. This book seems to transcend battles between intrapsychic and relational models of the mind by showing again and again, without ever being redundant, just how it is that intersubjectivity inevitably entails unconscious communication between any two subjects, that there is a dense and polysemous nature to so much of subjective experience.The first three chapters spell out these ideas and lay the groundwork for the rest of the book. In "Psychic Genera," a repression model of the mind is maintained but enriched by the idea of an unconscious that receives impressions "sponsored" by the object world which, when we are receptive enough, offer us new data of existence, which enlarge the very essence of who we are. This occurs when aspects of our native selves previously dormant are presented an object through which to come to life. This can only happen to the degree to which we are not restricted in our creativity by the repressed unconscious. In "The Psychoanalyst's Use of Free Association," Bollas again offers an enlarged picture of a pre-existing psychoanalytic mainstay. He shows something of what free association traditionally is and should be, while also showing how the analyst uses his unconscious in receiving and responding to the patient's free associating."Cutting" is an incredibly provocative essay that viscerally demonstrates the psychosexual and object-relational meanings and uses of this gripping symptom. As James Grotstein says in a review elsewhere of this essay, Bollas shows us how the patient tries to carve her idiom by "creat(ing) a symbolic entity out of the nothing that her vagina has signified for her and has been signified for her by others. It is a stab, in short, at achieving wholeness from the abjectness of her hole." In "Cruising in the Homosexual Arena," Bollas again very vividly, attending to both a phenomenological and a psychostructural depiction of his subject, demonstrates how certain homosexuals defend against an experience of primary maternal coldness by an intense erotizing of deadness and of sexual body parts in lieu of an embodied
Trustpilot
Copyright © 2022 Thriftbooks.com Terms of Use | Privacy Policy | Do Not Sell or Share My Personal Information | Accessibility Statement
ThriftBooks® and the ThriftBooks® logo are registered trademarks of Thrift Books Global, LLC