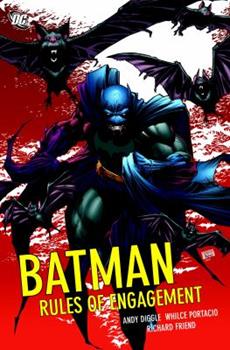 Written by Andy Diggle Art and cover by Whilce Portacio & Richard Friend Now in trade paperback Writer Andy Diggle (THE LOSERS) joins forces with artists Whilce Portacio and Richard Friend (WETWORKS) in this volume collecting the first six issues of BATMAN CONFIDENTIAL, looking at how Batman developed his arsenal in the war on crime. Advance-solicited; on sale November 26 - 160 pg, FC, $19.99 US

Published by Thriftbooks.com User , 12 years ago
Great reading!! If you are a new or old batman fan you'll like this book, good story, interesting lex luthor storyline, and for someone like me who's been out of the normal batman comics for years, just reading graphic novels or collections of late, you'll love to see lucious fox and other key batman characters. Was wonderful reading.

Published by Thriftbooks.com User , 13 years ago
"Batman: Rules of Engagement" collected the first six issues of the new Batman Confidential series that explores untold stories set in the early years of the Batman's career. The first storyarc explores the first meeting between Batman and Lex Luthor, the partnership of Bruce Wayne and Lucius Fox as well as the first Bat-plane. The story is written by up-and-coming Brit-writer, Andy Diggle and drawn by Whilce Portacio. Diggle was the editor of 2000A.D. in the year 2000 and is the current "Hellblazer" writer. Thankfully, he did not write in that obnoxious Brit-style here in "Rules of Engagement". In fact, the story read like a very straightforward US comic - full of over-the-top action, smart dialogue, fun character interplay, etc. It's an interesting enough story that I'll be rereading. In fact, it's downright brilliant. I loved the conflict between Batman and Lex Luthor in the final parts of "No Man's Land". This story is about their first meeting. Honestly, it's funny that it took DC so long to produce this story. Batman vs Lex is 1,000 times more interesting than Superman vs Lex. In a way, the two are equals. They come from the same world of superscience, privilege, industry and business that the super-farmboy from Kansas will never understand. They are both human beings who work to realize the best in their human potential. Luthor is written in a very Blofeld manner (complete with a Hair Treatment Institute in the Swiss Alps even) and his motivations are explored in an even more interesting way than Brian Azzarello did in his pompous miniseries ("Lex Luthor: Man of Steel"). It's been said that a good writer explores his characters by finding out WHAT THEY REALLY WANT. Diggle understands Lex Luthor. He wants a world of MAN - not Supermen. In fact, Diggle captures the essence of Lex in four words of exasperated dialogue from the man - "God, I hate superheroes!" Lex then proceeds to take over the US in true "Big Brother" fashion by taking over the military. Enter: Batman on his new Bat-plane and the rest is pure comicbook goodness. As for the art by Whilce Portacio, well, if you're familiar with the man's work (Punisher, Heroes Reborn: Iron Man, Wetworks), it's nothing new here. He still can't draw faces or cheeks. His characters come with funny hair and eyes. But he's damn good with the action scenes. Portacio's work is never beautiful (although in the early Image days, a lot of his faults were covered up by the studio's inkers - in the generic Scott Williams manner). What is good about his art are the layouts and perspectives. For instance, he deliberately draws Bruce's and Lex's first confrontation from the top-down view to show their antagonism. The two are chatting and smiling but it's obvious from the art that they are rivals - equals perhaps but antagonistic rivals nonetheless. Then there are the action scenes. I've never been a big fan of the Bat-plane but here, Portacio made me fall in love with it. His Bat-plane is awesome and dangerou

Now THIS is a Batman story!

Published by Thriftbooks.com User , 13 years ago
Set approximately one year after Bruce Wayne takes on the cowl of Batman, this story pits our hero against Lex Luthor--a match-up so brilliant it's hard to imagine why it hasn't been done a thousand times over. I mean, the Joker is a great crazy, but for sheer brilliance it's hard to figure why Lex isn't in the book more often. Though they've clashed in the "No Man's Land" storyline, this is considered their first meeting, and what a clash it is. Bruce and Lex go after a government defense contract, and of course, it all goes wrong. Lex eventually decides it's time to rule the U.S. again, and it's up to Batman to stop him. Batman's choice of stealth and cunning over the usual brute force attack of Lex's usual foil Superman presents a great contrast for the villain to face. Lex's line, "I hate superheroes" is hilarious in context. We see the introduction of the Bat-plane here (called the Batwing), and it's origin makes sense. I love the sinister undertones we get from Bruce's character as he seethes at Lex's twisted win of the government contract. There is a LOT of action here in every form, and it's great to see Batman have this entire adventure to himself. There's no teen sidekick or guest appearance by Superman here. And even facing the impossible (an entire army of robot soldiers), Batman finds an incredibly creative way to turn things around at the end. As I said before, I really think Luthor would make a better villain for Batman than he does for Superman (after all, he's the evil version of Bruce), but I'm glad they space out his appearances so they don't become cheap and repetitive like the rest of his normal stable of baddies. This is a great story!

Published by Thriftbooks.com User , 13 years ago
Always weird that a fat bald guy would be Superman's greatest foe. Makes lots of sense for Batman to face off against LL. The twist at the end of this book was so surprising and so touching that you will forget that you are reading a comic book.

Published by Thriftbooks.com User , 13 years ago
I enjoyed this tale of early Batman. The story has Bruce Wayne and Lex Luthor's companies vying for a defense contract to construct robot super-soldiers. When one of Wayne's giant robots goes amok and appears to try to kill Luthor, Captain Jim Gordon of the GCPD is on the case. Batman appears and tries to get to the bottom of the conspiracy and makes good use of his many gadgets. It shows how Batman/Bruce Wayne comes to acquire the Batplane. The story comes down to a final duel with Batman and Luthor and it's not too hard to figure who gets the best of it. The story by Andy Diggle and the characterizations were good and the art by Whilce Portacio was excellent. I liked the way that he drew an edgy Bruce Wayne. He didn't look like a soap opera star the way a lot of artists portray him. A little more rugged looking. His depiction of Batman was excellent and full of menace. No manga stylings(which I hate) here. I found that Alfred appeared to be a little too youthful in appearance, but you cant have everything. all in all, a most worthy entry into the Batman mythology. 5 stars.
Copyright © 2020 Thriftbooks.com Terms of Use | Privacy Policy | Do Not Sell My Personal Information | Accessibility Statement
ThriftBooks® and the ThriftBooks® logo are registered trademarks of Thrift Books Global, LLC