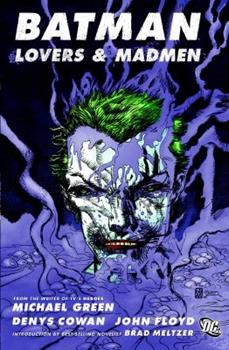 (Part of the Batman Series and Batman Confidential (#2) Series)

It is the beginning of the Dark Knight's war on crime, and it is progressing well - there's time enough for love as well as fighting crime. Then the mysterious 'Jack', a crack-shot psychopath with no sense of humour, appears, threatening both the life of Bruce Wayne's lover and the fragile peace Batman has established.

Lovers and Madmen - A New Twist on the Joker's Beginning

Published by Thriftbooks.com User , 12 years ago
As a longtime Batman reader and self professed "comic geek", I loved this book. Up until this series I really felt like "The Killing Joke" by Alan Moore and Brian Bolland was the difinitive Joker origin story. Now I see that there is plenty of room for different ideas about the Joker's origin. The writer clearly is forging a new path here, making the Joker not only completely insane, but also an incredibly gifted killer. While Moore's version was about a man who could be any of us - a guy who just had a really bad series of events happen to him - Green makes this Joker something more akin to the Heath Ledger model. A man who was always a killer and didn't need much of a push toward lunacy. Dennis Cowan's art is not for everyone, I will admit. However, as a huge Question fan and also a fan of his style for many years, I loved it. I thought it captured the fractured nature of both Batman and the Joker. If you enjoy a good Batman and Joker story, or just good comics in general, pick this up.

Published by Thriftbooks.com User , 13 years ago
In Batman Confidential 7-12, the Joker was already a schizophrenic prior ro his chemical bath. All the chemicals did was change his colors, but he got a little brain damaged from holding his breath while contemplating whether he should just let himself drown or escape. Also in Batman Confidential, we learn how the Joker got his smile. This version is backed-up by Batman RIP when the Joker has to get the sides of his mouth re-stitched. We also delve into the Joker's true reason for causing havok in gotham. Okey, what I really like most about Batman Confidential was that it did away with the campiness & the plotholes. The Red Hood was so cheesy & questionable that the author threw it out the window, having a wife made him too humane, so he was made a nomadic bachelor with a questionable line of work, the nerve-ending issue had to go because the Joker was capable of frowning, so they had Batman slit his mouth with a batterang to make it wider. While I was a bit taken aback by the Aeon Flux style art at first, this has become one of the most cherished pieces of my Joker collection. If I was to pick one Batman novel that this hugely contradicted, it would be the easily forgotten Batman: Secrets, in the way that Batman Confidential & Gotham Knights tent to contradict eachother.

Published by Thriftbooks.com User , 13 years ago
"Batman: Lovers & Madmen" collects issues 7-12 of the new "Batman Confidential" series and it is an instant classic! It explores the origin of the Joker and fleshes out the Joker far more than "The Dark Knight" film. Heath Ledger's Joker wasn't a character so much as a force for chaos and anarchy. Here, the Joker is a person. Now, there's an argument that the Joker is the one character that does not need an "origin story". I find myself agreeing with that point of view over the years (even when I read Alan Moore's "The Killing Joke"). But once you've read this book, you'll probably change your mind. The story is written by Michael Green (he wrote some episodes of the "Heroes" TV series) and drawn by veteran artist Denys Cowan. Denys Cowan's art for "Lovers & Madmen" is what made the whole thing worked so well. Countless other online idiots with blogs are complaining about Cowan's rough-edgedness and messy-looking lines. Same idiots also complained about Klaus Janson's art in "Batman: Death And The Maidens". They never grew up with Janson or Cowan. They grew up with the digitally-polished stuff by Greg Land (at Nu-Marvel). Cowan is a storyteller whose subtle lines are able to show the growth and maturity in the young Batman still learning his ropes to the increasing insanity in "Jack" (Joker) from one panel to the next. As for the writing by Michael Golden, well, if DC is reading this - please put this guy on the ongoing Batman book and throw out Grant Morrison! In today's decompressed storytelling style, Golden's scripts are unbelievably dense. Took me far longer than usual to read the 144-pages. Every line had something to say. Every internal monologue. Every line of dialogue. Every caption box. Golden KNOWS how to write. If you've enjoyed the tightness of "Heroes", you'll love his work here. He even threw in tiny nuggets like showing the first meeting between Jack and Harleen Quinzel (we know how these two will become lovers one day as Joker and Harley Quinn). Jack even paid for Quinzel's tuition fees in medical school! So in other words, the Joker "created" both Dr Quinzel the psychiatrist AND Harley Quinn, the insane sidekick. As for the Batman, we see him falling in love with a girl from the art gallery. The story begins at the end of his first year as Batman. Teaming up with Gordon, they literally cleaned up much of the crime in Gotham City and he was kinda letting his guard down a little (so much that he allows himself to fall in love with a girl) because he thinks that he's at last understood the criminal-mind, and hence, is able to stop any potential criminal. Everything is logical. Everything is in the criminology and detection handbooks. Then he meets someone who short-circuits everything he thought he knew about crime. He meets someone who is criminally-insane and he couldn't understand that. We see him consulting a young Dr Jonathan Crane (who'll one day become the Scarecrow) and Dr Crane telling him that the Joker is INSANE. B

A Look at Lovers and Madmen...

Published by Thriftbooks.com User , 13 years ago
I had not heard of this story before I bought it, instead catching a glimpse of it in the bookstore and deciding to give it a chance. I'm a large fan of Batman in general, and I'm always ready to give another adventure a try if it captures my interest. Lovers and Madmen comes forward with another Joker origin, which as many people argue, is a problem in itself. Some of the Joker's best characteristics are due to his enigmatic past, but in my opinion, this is how you would do an almost untouchable subject justice. Since I'm sure people want to read the story itself, I'll just point out a few parts of the tale that I thought made it warrant these five stars. On one hand, the audience gets to watch Batman grow. He orders a hit on this man Jack, the future Joker. This seems so unthinkable, so non-Batman, that it almost jerks the reader out of the story. This is a younger Batman, a Batman who has not become his true self yet, who has not reached the potential and come to the values that make him Batman. He makes mistakes, and he loses his confidence when things don't go his the way he had planned. Once he meets Jack, a being who is outside of his comprehension and expectations, his confidence almost shatters. However, he comes closer to becoming our Batman. He makes the right decision in the end, just as he was meant to do. This Batman is human, still fresh on the job and becoming himself. In this story, the Joker starts out not as a criminal, but someone just simply evil. He's tired of his mundane life lacking challenge, and he finds purpose in the Batman. This strangely realistic view just feels right. The reader can visualize the connection between the two, the fascination that took Jack and made the Joker. It just makes sense. While the tale focuses, rightly, on Batman and the Joker, we get tidbits about future key players. There are glimpses of Dr. Crane and Harleen Quinzel, which just bring a little extra to the table. It may seem like a little thing, but it just adds more joy to the pages. The art fits the story well. The lines are somewhat layered and sketched, not clean. It's not a style for everyone, but there are moments where you just get caught up in the beauty of it. Personally, I adored Lovers and Madmen, and I could go on about why it's such a great read. I'm actually rather stunned with the downright terrible or just mediocre reviews it has collected. I urge you to go out and give this story a try. It's definitely deserving of at least a look. The only word of caution I have is this. This story is different; it is something new, an addition to a universe that has been growing for years. In order to enjoy it, you need to be open to it and accept what it gives you before making a decision on its quality. This is not The Killing Joke, and from what I've seen, it is when people start comparing this to it that it becomes less than what it is. I loved The Killing Joke, I still do, but as long as people hold above every other Joker o

A better Joker story (in my eyes)

Published by Thriftbooks.com User , 14 years ago
Well, I am sure a lot of people will disagree but here goes... I don't believe the joker was ever meant to have a canon origin story, but sometimes they prove to be interesting none-the-less. I had heard that this one was not very good, but since I am a huge Joker fan I figured I would give it a shot. I actually prefer this over "The Killing Joke" and "The Man Who Laughs" ect. I love the more realistic and gradual approach that takes place and you actually see the Joker become. I really liked the art style used in this comic and feel it adds to the story itself. I admit, this story is not for all fans. A lot of people have said they don't like it and I am sure a many more will too. I am not a fan of the interpretation of Batman, but it fits with where the story goes regardless, so I can't even complain about that, really. If your a hard-core Joker/Batman fan and want to read something different from "The Killing Joke" and company, then I highly recommend this.
Trustpilot
Copyright © 2022 Thriftbooks.com Terms of Use | Privacy Policy | Do Not Sell My Personal Information | Accessibility Statement
ThriftBooks® and the ThriftBooks® logo are registered trademarks of Thrift Books Global, LLC