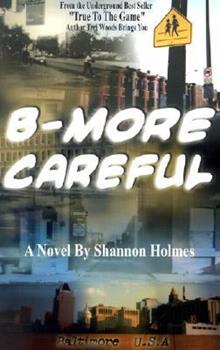 B-More Careful takes sex, lies, and betrayal to the next level in this action-packed, fast-paced, suspense-filled novel.Growing up on the cold, mean, inner-city streets of Baltimore is Netta, leader... This description may be from another edition of this product.

Published by Ny777 , 8 months ago
I first read this book in high school and bought it again because it was so good. It was better and more meaningful as an adult. I realized things I didn't realize before! RECOMMEND!!

My very first of Shannon Holmes

Published by BEBE , 1 year ago
This book was in my sister's house when I stumbled across, and I asked permission to read it (unlike my family, I'm an advid reader), I was told no. Three weeks later, I saw the book again, and again I asked permission and when my sister said, no because "she wants to read it." I "took it" and read it in three days! Wow! Amazing book! Well written to the point that I wanted to kill the character myself! Lol... Please read this, you will not regret it!

Published by Thriftbooks.com User , 20 years ago
I rarely feel a book deserves 5 stars (unless your J California Cooper) but this book does deserve that!! BUY IT. If this is the author's 1st novel then we are in for some very spectacular things from her/him. I enjoyed this book very much. Prior to reading this I read "True To the Game" and I do not know why people are comparing the two books. This book is by far superior!! It does a wonderful job of telling the story of how the way you lead your life could one day come back and bite you in the bum(nicest way I could think of putting it w/out being edited). Netta was far more believable as a player and a moneygrubber than any other character I have read thus far. She's smart, ruthless, and beautiful. You love her, hate her, and feel sorry for her. The author does a wonderful job of telling separate stories that all come together in the end. There is no guessing about what is gonna happen in this story. The secondary character where not as developed, but who cares? There is enough going on in this story that to do so would weaken the story. If you like books about players getting played and what can happen if you play the wrong person then you will LOVE this book.

Streetlife is The only life I know or is it?

Published by Thriftbooks.com User , 20 years ago
I truly enjoyed this first book by Shannon Holmes. It was a definite page turner. There was no good point in this book to say ok, I'll read the rest tomorrow, you wanted to read it all NOW..The character development was wonderful, we were given enough information on the characters to feel emotions for them. I am from the streets and have friends and associates who are still stuck in the streets; all aspects of it.B-More Careful wasn't just about drugs, guns, material things and getting paid. It was a story about life in the streets of Baltimore. It was the story about life and what you make of it. You have power to change the game, don't let it change you. How the game is played doesn't necessarily have to end your life.Netta wanted love, Mimi craved attention and popularity, Black needed power, and the streets grabbed them all or did it?In the style of No Disrespect but a voice of her own Shannon Holmes has spun a wicked tale that MUST be read by everyone.On the APOOO scale this book demands a ^5

Published by Thriftbooks.com User , 20 years ago
Be More Careful defintely gets five stars off the top-no doubt!This story has so many twists and turns that you have to read some parts twice to keep up! This is a well written story about drugs, the hood and the GAME! The P*ssy Pound clique was a bunch of females who used their looks and what was between their legs to get what they wanted. The girls got everything from money, jewerly, expensive clothes and cars. Their cash flow increased while their character decreased. They did whatever it took to get that money no matter who they hurt.BMC had me shedding tears, drying them and shedding some more. As soon as I got over someone's death in the book then BAM someone else got knocked!Netta would have to be my favorite character even though she did some devious things! I guess my heart went out to her because from the get-go she never really had nothing. She lived in the projects, her mother was a dope fiend and she didn't know who her father was. On the other hand her best friend Mimi grew with her father and was spoiled rotten. Black was a character I disliked from the beginning, but towards the end of the book I HATED him!Shannon Holmes and Terri Woods you both did a great job with this story. I loved it and will pass it on to my friends.Be More Careful is defintely a book that you don't wanna miss!

Published by Thriftbooks.com User , 20 years ago
This novel was a fast-paced,suspenseful,action-packed thriller.I wished it would have never ended. Any fan of street novels such as "Coldest Winter Ever" or True to the Game" will love this book. Though these three books share similar themes,the way the author paces and words the story is drastically different. Mr.Shannon Holmes crafts a clever tale of sex,money and murder.From the comfort of your own home, he takes you into the streets. Into places you maynot normally be in or situations you maynot normally see. You get to see the flip side of the game. Things are not peaches and cream. If you are an observant reader you will see that this story is really about conflict,struggle,drama and change. The author definetely gives the reader a moral to the story. He peaches without sounding preachy. I was throughly satisfied after I finished this novel. I DEFINITELY GOT MY MONEY's WORTH!!!!!

Published by Thriftbooks.com User , 20 years ago
I just finished reading this book! I felt I had to review it as soon as possible. The book is excellent. Ms. Holmes covered every base possible. The character Netta displayed an enormous amount of strength. I enjoyed Ms. Holmes displaying Netta's emotions and allowing us to see that Netta could give and receive love. Ms. Holmes did justice for every character in the book. This book reminds me of the saying "The game is cold but it's fair." I was glad that Netta was able to overcome her love for the game and move on with her life. If you enjoyed "The Coldest Winter Ever", you will enjoy this as well.
Trustpilot
Copyright © 2022 Thriftbooks.com Terms of Use | Privacy Policy | Do Not Sell or Share My Personal Information | Accessibility Statement
ThriftBooks® and the ThriftBooks® logo are registered trademarks of Thrift Books Global, LLC