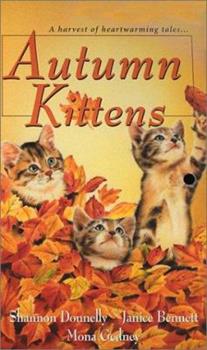 Published by Thriftbooks.com User , 20 years ago
I agree with the above reviewer, two out of the three are really good and unfortunately it was also the third one I didn't care for as much. Notice, though, I say, as much. I really enjoyed all three. Short stories are great to read because they are short stories. You can usually read them in one sitting (hence the name "short stories").Of the three stories, I enjoyed the middle one the most. The naming of the kittens kept me in stiches for days but it was more than that. It was the feel and texture of the book which made it wonderful to read. I live in Arizona so I really don't have weather changes here and this is just a great book. If you live in a warm state, like I do, this book is wonderful to get you in the feel for autumn.

Published by Thriftbooks.com User , 20 years ago
"Inseparable" by Janice Bennett begins this anthology. I could not help but be reminded of a Disney movie called The Fox And The Hound. A tiny kitten, Sappho, and a huge hound, Hannibal, don't understand that they are suppose to be natural enemies. Their frolicking brings together an unlikely couple. "Cat's Cradle" by Shannon Donnelly is next. It begins when a widow enters an estate to find her cat, Bea. She did find the at, but also a litter of new born kittens, just as the new owner of the estate walked in! "Lord Wintergreen & The Beast" by Mona Gedney is last, and my personal favorite! When informed that his deceased brother had a son, Lord Trevor Wintergreen did not believe it. But when he was told that the boy and his mother lived in and ran "The Golden Lion Inn", he decided to stay a few days, incognito, to see the child. The instant Wintergreen saw the lad, he knew the boy was definitely his nephew! Wintergreen also found himself deeply attracted to the mother as well! Problem was that they had a very intelligent cat named Beast as their protector. And Beast seemed to know their latest guest was not a cat lover. Of course, this meant the feline simply HAD to adopt the gentleman, if only to torment him repeatedly! *I do not often give anthologies such a high rating. Yet I feel that this one more than deserves it! This book made it to my "Keeper" book case. I have no doubt that I will be reading it more than once in the future! Excellent feline tales (pardon the pun) by three very talented regency authors! Brava! *

Published by Thriftbooks.com User , 20 years ago
Kittens have become so ubiquitous in Regency collections that it's not always easy to find an agreeable litter. In this book, however, two out of three are terrific! The third misses only because Beast (the third story) is in no way a kitten. At least if he is, I certainly wouldn't want to be anywhere near him when he reaches his maturity! That said, though, this book is still a winner. When a huge dog adopts a tiny kitten, who could know the outcome? Certainly not the dog's master nor the kitten's mistress. Ariadne Whitcombe had troubles enough just in trying to keep the roof over the heads of her mother and younger sister, plus herself, of course. Waiting for the new heir kept the ladies all on edge, for it would only be at his discretion that the Whitcombe women could stay in the Dower House. Trying to protect a small kitten from a huge hound with only a broom for a weapon was perhaps not the best way to make the acquaintance of the Viscount St. Clare, but Ari couldn't help herself, even if the hound did belong to the handsome gentleman. The kitten is determined to spar with the dog, continually setting up meetings between the two humans, leading to a most satisfactory ending in this tale--INSEPARABLE--from one of Regency's best-selling authors, Janice Bennett. A different sort of tale is told by Shannon Donnelly in CAT'S CRADLE. Bea is one persistent new Mama! She's determined that her kittens will be born and stay for their kittenhood in the library at Adair Manor, just the way she's always done it. Problem is, Adair Manor is no longer in the family, having been lost in a card game to a Sir Ashten Ravenhill. At first meeting, he doesn't appear to Emaline Adair Pearson to be the sort of stable, reliable person to give shelter to a new family of cats. Of course, her two young sons disagree. Thomas and Will think the new owner is perfectly all right for anything at all, but most especially keeping watch over Bea and her family. And letting the boys share in the responsibility. Emaline thinks Bea and the kittens should stay in her home, but Bea disagrees. Eventually, the new Mama works her wiles on the wary ex-soldier and the prickly widow, forging new family ties and just incidentally, of course, securing her cupboard in the event of future kittens. A charming story from a talented new writer. Another veteran, Mona Gedney presents Beast in all his unusual glory in LORD WINTERGREEN AND THE BEAST, a very unusual tale about a most unusual cat. Trevor Stanwick does not particularly care for being blackmailed, so he sets out to discover the whys and wherefores of the mystery letters. Is young Grant the rightful Earl or is he not? Did Trevor's older brother Edward really marry the young woman Marilee Masters and have a child by her, before his death several years earlier, in the new United States? To be sure, Beast plays an important part in finding answers to these questions, and as entertaining as he is, the story still seems rushed, almost as th
Copyright © 2020 Thriftbooks.com Terms of Use | Privacy Policy | Do Not Sell My Personal Information | Accessibility Statement
ThriftBooks® and the ThriftBooks® logo are registered trademarks of Thrift Books Global, LLC