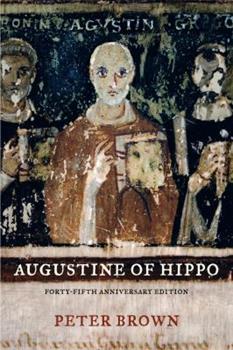 Augustine of Hippo: A Biography

This classic biography was first published forty-five years ago and has since established itself as the standard account of Saint Augustine's life and teaching. The remarkable discovery of a considerable number of letters and sermons by Augustine cast fresh light on the first and last decades of his experience as a bishop. These circumstantial texts have led Peter Brown to reconsider some of his judgments on Augustine, both as the author of the Confessions...

Published by Thriftbooks.com User , 15 years ago
As the first 19 reviews here have thoroughly described, this is the definitive bio of Augustine. (What Bainton once was for Luther). The 2nd edition is a whole new work. I met Peter Brown in Princeton, where he taught, a few times, and he just oozed brilliance. I have nothing new to add except an anecdote that tells it all. The story goes that Brown was so focused and mature that he came to the idea of writing this definitive critical bio of Augustine while in his early teens. He focused all of his energy on it, methodically begining to maste the secondary academic literature on Augustine before even beginning his university studies. He wrote this bio shortly after completlng his undergraduate honors thesis, publishing it to rave reviews in his early 20s. This story has made him a legend. And once, Dr. Paul Rorem of Princeton Seminary told us, he asked Brown about it. Brown laughed and told an even more amazing one. Turns out the truth is that Brown had not developed any special interest in Augustine until the end of his undergraduate studies. Being pressed for a thesis topic, with a deadline approaching, he picked Augustine almost at random. He then set about to master Augustine, and in just 2 years ended up writing the definitive bio that changed the field forever! The mag. opus of one of the world's great scholars.

Published by Thriftbooks.com User , 17 years ago
I just finished this book. On the whole I enjoyed this book thoroughly. A nice feature of this work is how it puts everything Augustine said into the historical surroundings, which makes reading primary sources more easily understandable as you understand the historical context they were written in. As an accomplished historian over this time period, Peter Brown is more than able to accomplish this task. Historical settings shown include: the backgroud of what growing up in Africa would have been like for Augustine, the beautiful imagery describing what Augustine's baptism (by Ambrose) and initiation into the Catholic Church would have been like, how conflicts with the Donatists, Manicheists (and of course) Pelagianists all came about and how Augustine dealt with them all, and the list goes on. My only concern is that I read the 1st edition of the book, and I've been told there are additional parts added in a revised 2nd edition which might interest me. However, that is hardly a fault of the book itself, (just a case of me being cheap by buying a used copy) so my review is the full 5 stars. A nice reference on Augustine is "Augustine Through The Ages: An Encyclopedia" by Allan Fitzgerald & John Cavadini; which may also interest readers as well. I have browsed through it in a library and hope to get a copy when the funds are available; it looked very promising to say the least. If you want to understand the theology and history of the Western/Latin Church, it is very hard to do so without knowing at least some basics of Augustine's theological distinctives and stances. Texts like Brown's biography here is a nice first step in understanding the old Saints thought.

Scholarly Biography at Its Best

Published by Thriftbooks.com User , 18 years ago
Peter Brown has accomplished what a scholarly biography should: make us feel that we have come to enter the life and mind of the subject of the biography. Brown's chapters are relatively short and thus make reading this long book pleasurable because you can make identifiable progress in your reading. Brown also has copious citations to the works of Augustine for those who wish to track down a quote. In addition, he has added an epilogue that actually corrects the flawed judgments he made in the first edition over thirty years ago (this is a humility rare in academic circles). The epilogue also has a chapter on new writings of Augustine that scholars have uncovered since the first edition of his work. My only wish would have been for more theological exploration of the theme of predestination which is presented in a superficial manner. As a Catholic, I would also have preferred more explicit exploration of Augustine's relations with the popes of his time. But, all in all, Brown has written and updated a great biography that deserves its stature as the definitive biography of Augustine. I heartily recommend it.

Published by Thriftbooks.com User , 20 years ago
Peter Brown's biography of Saint Augustine, written over 30 years ago, is still as fresh and inviting to-day, finding excited and interesting readers in whoever picks it up. Augustine lived from 354-430 AD. While this may seem remote, Brown has a special gift for making Augustine live through his writing style, which both provides clever and welcome points of modern comparison to Augustine's contemporary events. Another wonderful technique of Brown's biography is to let Augustine, for the most part, speak for himself - it is almost like a mediated autobiography, an expanded "Confessions," if you will.This manifests itself in the lengthy, but always extremely applicable excerpts that Brown draws for every occasion from Augustine's "Confessions," as well as his other major works, correspondence, religious tracts, and sermons. Brown is as little intrusive as possible, setting Augustine's writings, actions, and speeches in their immediate context. At the same time, Brown's exhaustive research is readily apparent, as he constantly refers to or makes note of the wide range of historical, biographical, and critical scholarship available to him as he wrote. A key element in Brown's biography is the importance of asserting Augustine's heritage as a particularly African one. Brown recovers and reminds us that for his massive impact on the course of Christian thought, Augustine was tied in remembrance to his native Thagaste, and through his ministry, to the seaside city of Hippo in Northern Africa. The African element asserts itself in Brown's emphasis on the African impact of many of Augustine's most definitive struggles - against the Manichees (who insist on static dualism and absolute wisdom), the Donatists (schismatics who insist on the primacy of their version of Catholicism), and the Pelagians (who insist on a form of radical free will). What is most important and most impressive about Brown's biography is that he renders a portrait of Augustine, the man. While other, now legendary figures are referred to as Saint Ambrose or Saint Jerome, Brown carefully calls the subject of his biography, in the spirit of Augustine's writings, simply Augustine. We see straight through the book Augustine's own pervasive preoccupation with the limitations and possibilities of the individual human being and his struggles with his faith and his responsibilities. In light of this, Brown consistently brings the reader back to Augustine's notion of the 'progress' of the person of faith. For Augustine, faith and belief were not matters of complacency. God and Heaven are to be always 'yearned' for, and actively sought, no matter how Augustine's thought shifts over the course of his life. There is a great hope in Augustine characterized by this idea that, although God's will may be fundamentally inaccessible, people must actively pursue and hopefully enrich their faith. In this context, Augustine is also very inclusive - his ideas for a church on earth that wel
Copyright © 2020 Thriftbooks.com Terms of Use | Privacy Policy | Do Not Sell My Personal Information | Accessibility Statement
ThriftBooks® and the ThriftBooks® logo are registered trademarks of Thrift Books Global, LLC