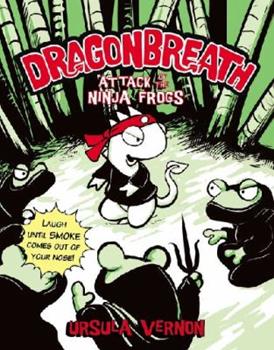 Attack of the Ninja Frogs

(Book #2 in the Dragonbreath Series)

Danny Dragonbreath is not the best student in school. He can't breathe fire on command. But if you ever get kidnapped by a clan of sinister Ninja frogs . . . Don't worry, Danny Dragonbreath will have your back! Visit Danny online at www.penguin.com/dragonbreath

Published by Thriftbooks.com User , 11 years ago
Reason for Reading: Read aloud to my 9yo ds over the March Break. Summary: Danny has his mind full of imaginary samurai scenarios and watches ninja movies every night because of his current Japanese warfare obsession. Plus ninjas are cool! Then a Japanese exchange student comes to school for a while, Suki Salamander, and Wendell falls a bit in love with her which makes Danny nauseated. Until he finds out that frog ninjas are trying to kidnap Suki. So the three take off to visit Danny's great-grandfather, an expert in the field, who will be able to tell them how to rid themselves of these Ninjas and why they want Suki in the first place. Comments: I thought the first Dragonbreath book was so-so but my son enjoyed it very much and with a title of "Attack of the Ninja Frogs" we just had read the next one. I'll say I'm glad I did as this one was much more fun (for me) than the first. Obviously a cute story, definitely aimed at boys. Plenty of humour that had both of us laughing and ds was up out of his seat doing his ninja moves at the appropriate times; I even joined in with a few special ninja moves of my own! The artwork is cute and cartoony. The comic style portions of the book are interwoven throughout and are a part of the story, they can't be skipped. This style of book is becoming known as a hybrid part textual novel/part graphic novel. However, the graphic sequences are kept shorter than are found in the first book. They were kept more to short sequences on the bottom of the page or the occasional full page but were hardly any that ran for more than two pages. Overall, the book does come out to be profusely illustrated rarely showing two pages of plain text without illustration. The story is quite entrancing; what boy doesn't want to go join up with samurais against ninjas? While all this action is going on there is the back story of Wendall "liking" Suki and being embarrassed and not knowing how to act around her while Danny thinks girls have "cooties" and teases Wendall about having a girlfriend. By the end they both learn a lesson that perhaps doesn't extend to all girldom but has taught them that Suki is not an intimidating girl, no Suki is simply their friend. This whole storyline went way over my sons head though. He has no problems with girls. Except mushy stuff like kissing then he's grossed out but no kissing in this book. My son had never even heard the word "cooties" before and I didn't elaborate on it much, not necessary to tell him about all the rude cootie games and songs we played when I was a kid (LOL) At the end of the book we are tempted by an announcement that a third book will be coming soon and ds is already sure he wants continue with Danny in Dragonbreath:Curse of the Were-Wiener.

Published by Thriftbooks.com User , 11 years ago
My title says it all - kids will love the Dragonbreath books, and their parents can love them, too. These are some of those rare books that, when your child asks you to read them aloud for the umpteenth time you'll say, "Okay!" We've known and loved Ursula's work for years and when we heard she was writing a childrens book series we were thrilled. Her written flights of fancy on her LiveJournal narrating her art are some of the funniest things I've ever read - I knew a kids book would be fabulous. I was not disappointed :) I must stop a moment before I go on about the *books* and talk about Ursula's art (all illustrations in the book are her own). Her art is the essence of whimsy and hyperbole with a big dash of the slightly twisted. Her paintings run the gamut from cute and fuzzy to laugh-till-you-cry funny, to OMG I don't want to hang that on my wall! But all of her art embraces the absurdity of life, of anatomy, of nature's little jokes at every species's expense and at the misguided idea that we're ever in control of anything. The art in Dragonbreath follows her style with an added dose of hilarity. The expressiveness of the simply drawn animals manages to be both human and completely reptile. The anthropomorphizing of, well, everything cracks you up because yes of course, that's exactly what potato salad would look like if it aged so long in the school cafeteria that it evolved into sentient (and evil) life. Our Brave Hero, Danny Dragonbreath, has an outlook on life that any child can relate to. Fanciful, whimsical, a tad bit jaded about adult expectations and utterly inventive. A fantasy life almost more real than reality is a concept that speaks to any child, and my kids loved it. This was the first chapter book that my youngest read entirely...and he read it cover to cover in one day. Took him all day! Then his pre-teen older brother sneaked away with it, zipped through it, and declared it awesome. In between times, I was picking up Dragonbreath whenever it wasn't actually in someone's hot little hands and reading it as fast as I could. The whimsy that works for kids is just as appealing for adults, but there is also a wonderful dry irony that runs as an undercurrent through the Dragonbreath books. Ursula has not written talk-down-to-them lobotomized childrens books. She's written books from the point of view of a child and at a reading level a child can enjoy but with the writing sensibilities and sophisticated perceptiveness of an adult. Not too many authors can do that these days :)

Published by Thriftbooks.com User , 11 years ago
Danny Dragonbreath is one super funny dragonboy. From page 1 I have been hooked till I reach the end of the book. It's so hillarious and engaging. There is a new girl in school and she is soo unlike other girls eventhough like other girls she wants to be a vet when she grow up. Suki is a smart exchange student from Japan. She loves reading comics and what's more, she is the reincarnation of a ninja queen! One day after school Danny and Wendell help her from two ninja frogs who want to claim her as their queen and so begin their adventure to rid of the ninja frogs once and for all! The pictures in the book do enhance the story and instead of keep telling the storyline in words the writer switched to gorgeous pictures and thus avoiding the boredom of too many words and no pictures that plaque the kids in age range this book is intended. I do love this book! It has engaging characters, great storyline, nice pictures, and deliciously hilarious. My ten year old boy has already read this book twice in two days and he's recomended the book to all his friends!
Copyright © 2020 Thriftbooks.com Terms of Use | Privacy Policy | Do Not Sell My Personal Information | Accessibility Statement
ThriftBooks® and the ThriftBooks® logo are registered trademarks of Thrift Books Global, LLC