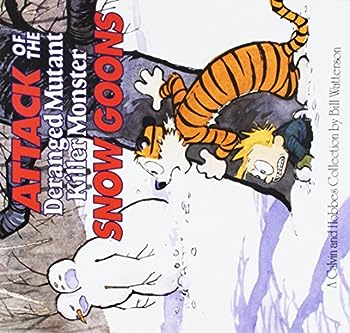 (Book #7 in the Calvin and Hobbes Series)

Calvin and Hobbes are back in another thrilling adventure involving escapes from girls, parents, and snow goon monsters. In Attack of the Deranged Mutant Killer Monster Snow Goons, Calvin suffers a... This description may be from another edition of this product.

A gift for my grandson.

Published by Derek A. Murphy , 3 years ago
I've always enjoyed Calvin and Hobbes and was delighted to learn that my grandson also likes the pair. This is a gift for my grandson.

Published by Thriftbooks.com User , 22 years ago
Bill Waterson is argudably one of the best comic writers out there. Even through his retirement, he has made great books of past comics featuring his Calvin and Hobbes characters. I laugh and laugh at these comics he creates and I sometimes wonder how he comes up with such brilliant ideas sometimes with the storylines of some of the strips.Calvin, one of his best known characters, is the trouble-making kid in the school. He is funny and imaginative and likes to make funa and games with his "real" pet friend Hobbes. Through the comics, you can see the relationship between a stuffed animal and a human.In this comic though, Hobbes "comes to life" in Calvins eyes. The things that Calvin can sometimes get involved in is so hilarious and sometimes out of this world.I guarantee that anyone that loves comics will fall in love with this one and should definitely buy this book to start their collection of classic comics.All of Bill Waterson's comic books are very well done and very professional. His work is his life and it shows the time and consideration it took to make these characters come to life. Thank you Mr. Waterson for creating such a great comic and thatnk you people for reading my review!

This may be the best "Calvin"

Published by Thriftbooks.com User , 22 years ago
All Calvin and Hobbes books are great. But this one, in which Calvin imagines that he has brought a demonic snowman to life, may be the best of the bunch. The sequence of strips in which Calvin is sure that the snowman and his friends are out to kill him may be the most brilliant of Bill Watterson's career. He is an absolute comic genius whose presence in the funny pages has been sorely missed since his retirement. "Snow Goons" is Watterson at his finest.

Published by Thriftbooks.com User , 23 years ago
I've got almost every Calvin and Hobbes collection, but as this was the first one I ever bought I'm going to review it. What can I say? What can anyone say? Bill Watterson has broken the mould of comic strips--this is the wittiest, silliest, sickest, and most heart-warming fiction I've ever come across, in ANY medium. I love his characters, and I love his insane plotlines--yet there's always a golden nugget of truth at the heart of each. Along with Gary Larson, Bill Watterson has breathed new life into the comic strip genre (and I'm no big fan of comics). Brilliant, brilliant, brilliant stuff.

Published by Thriftbooks.com User , 23 years ago
I have read almost all of the books in Calvin & Hobbes collection. By far, this one is BETTER THAN THE BEST! I have always been a great Calvin & Hobbes fan, but this has crazy plots and more...like in the Attack of the Deranged Mutant Killer Monster Snow Goons (the comis strip not the book) Calvin makes a snowman come to life and it makes more weird snowmen. They attack Calvin & Hobbes. Then Calvin's parents come outside and say it's time to go to bed. Will Calvin & Hobbes be able to save the world from the Deranged Mutant Killer Monster Snow Goons?
Trustpilot
Copyright © 2022 Thriftbooks.com Terms of Use | Privacy Policy | Do Not Sell My Personal Information | Cookie Preferences | Accessibility Statement
ThriftBooks® and the ThriftBooks® logo are registered trademarks of Thrift Books Global, LLC