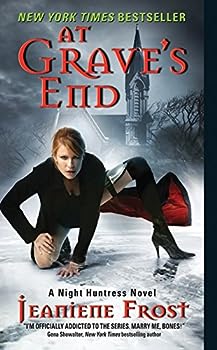 (Book #3 in the Night Huntress Series)

Some things won't stay buried . . . at grave's end It should be the best time of half-vampire Cat Crawfield's life. With her undead lover Bones at her side, she's successfully protected mortals from... This description may be from another edition of this product.

Published by Thriftbooks.com User , 13 years ago
Eventually it had to happen. Cat Crawfield's appearance as half-vampire, half-human is too distinctive to keep the identity of the "Red Reaper" a mystery. Meanwhile, someone very powerful wants her dead and an all-out vampire war is about to begin. Will Cat and Bones survive the melee that ensues? Wow, Jeaniene Frost is a formidable force in the urban fantasy genre and AT GRAVE'S END solidifies she is here to stay! Both the world building and the character development are superb in this action-packed tale. Hold onto your hats, though, as this one gets a little hairy! Cat and Bones are a remarkable couple. The love story between them has developed over the previous two books but AT GRAVE'S END takes things a bit deeper. The physical attraction isn't the focus but instead we see the emotional bond. In fact, all of the relationships develop further as Jeaniene Frost takes this world to a whole new level in AT GRAVE'S END. AT GRAVE'S END can be read as a stand alone novel but the world is a complex one and could be a bit overwhelming to a newcomer. The relationships have also built over the course of the series and some of the nuances and subtle humor might be missed if one hasn't read the earlier books. Jeaniene Frost isn't afraid to take chances as she does a marvelous job at keeping her world interesting. The plotlines of the Night Huntress series are not static but instead we learn more about the dangers of the vampire world in each new book. AT GRAVE'S END is an exciting installment and my only disappointment is that I now have to wait for the next one. Highly recommended! COURTESY OF CK2S KWIPS AND KRITIQUES

Published by Thriftbooks.com User , 13 years ago
This was a really fun read. Now that Cat and Bones are married you would think life would start slowing down........ Actually it seems like things are getting worse! However bad it gets, Cat and Bones stick it out together. This book didn't have a minute to spare. It has action, sex, humor, emotional scenes and interesting creatures. Cat's father makes a rather nasty appearance and almost succeeds in getting her killed. Justine is very surprising in this one. All in all I think this book was just about perfect. I like how Cat and Bones (and now I can say the gang) keep evolving instead of rehashing the same old story. I love the direction the book is taking and can't wait for the next installment, An Early Grave due out July 2009. I highly recommend this book and the rest of the series. I also recommend: Nightwalker (Dark Days, Book 1) Dead Reign The Accidental Demon Slayer Staked (Void City, Book 1) A Rush of Wings: Book One of The Maker's Song

Published by Thriftbooks.com User , 13 years ago
This book is amazing! The best in the series so far. *NO SPOILERS HERE* Cat & Bones finally have their personal conflicts behind them so they can work as a team to focus on any outside forces out to get them. I think there is a perfect balance of action, drama, romance and mystery. (With some laugh-out-loud moments to top in off!) While it is true what one reviewer said that there is less sex in this book than the previous 2, I don't think it takes away from the book at all. The passion is still there. The love was apparent. But they went through some serious tradegies that brought them closer together. I can't imagine Jeaniene can keep getting better with each book, but it seems she does. How much better can she get?

Great evolution for the series

Published by Thriftbooks.com User , 13 years ago
I happened to love this entry in the Cat and Bones franchise. Yes, their relationship is different. It's evolving, and thank goodness for that. I loved the fact that Cat was forced to make some decisions and changes in her life. She's married, and to an extremely complicated man. Her relationships with those around her are evolving as well. I got very caught up in the emotion; it isn't as light as the previous books, but had some very real, heart-wrenching moments. Bones remains one of the hottest male protagonists in the genre, and Frost develops and deepens some of his relationships as well. To sum up: If you are looking for another light romp, this might not be for you, but if you're looking for real evolution and emotion, I hope you enjoy it as much as I did.

Awesome - My Favorite So Far

Published by Thriftbooks.com User , 13 years ago
I thought this book was a great addition to the series. It started off a little rough for me because the whole dress and act like a hooker bit was getting old, in my opinion, but Bones was tired of it as well so it seems to be resolved and full steam ahead from that point. Lots of fast paced, unpredictable action followed that kept the story moving and the reader guessing. Some parts could have used a bit more description and scenes ended and changed too abruptly at times but nothing that detracted too much from the story. Bones was great as always and Cat lost some of her rough edges and was actually more likable this go around. What really made this story stand out and get my five stars, though, was the emotion. I had tears running down my face for at least two chapters it was so moving. Any book that can get me to cry real tears for fake characters means the author has done their job and brought me fully into the story. Great addition to the series and I can't wait for the next installment!
Trustpilot
Copyright © 2022 Thriftbooks.com Terms of Use | Privacy Policy | Do Not Sell My Personal Information | Accessibility Statement
ThriftBooks® and the ThriftBooks® logo are registered trademarks of Thrift Books Global, LLC