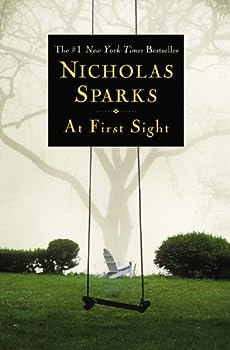 In this #1 New York Times bestselling follow-up to True Believer, a young couple's love faces the ultimate test when the past disrupts the life and family they've built together.There are a few things... This description may be from another edition of this product.

Slow and no real story

Published by Bill , 7 months ago
very slow. I couldn't get onto it. Turned 5 or 6 pages at a time. Don't waste your time.

Published by Janelle , 1 year ago
Part 2 follows up after Part 1's surprise. There is a an event you wouldn't have thought happen that pulls you in.

Published by JC , 3 years ago
Nicholas Sparks does not disappoint with "At First Sight." The character development is amazing throughout the book and you get to see the growth of all of the main characters. I read the book over just a couple of days because it was so good I could hardly put it down.

Published by Thriftbooks.com User , 16 years ago
I just love Nicholas Sparks novels and this was one of the best. It was an emotional roller coaster from start to finish. I laughed and I cried. As the sequel to True Believer it blew me away. I would recommend it to anyone who wants a truly incredible book to read.

Published by Thriftbooks.com User , 16 years ago
This book was so good. I couldn't put it down. I thought I would somewhat be lost after not having read the first book, but I wasn't. I found myself getting done with this book so fast because I just couldn't put it down!! I recommend this to anyone looking for a good read!

Published by Thriftbooks.com User , 17 years ago
Written in that special way that only Nicholas Sparks can, At First Sight is a must read. If you and your love are contemplating marriage, you can learn a lot from this book. I especially liked Jeremy's father's advice to him and Doris's advice to her granddaughter, Lexie. To get the full effect of this story, I recommend that you read True Believer by Sparks. It is the precursor to this book and by reading it you will better understand what happens in the continuing love story between big city (New York) boy, Jeremy Marsh, and small town (Boone Creek, North Carolina) girl, Lexie Darnell. I learned to like Lexie much better in AFS. When she listens to her grandmother, she grows. Nicholas Sparks's writing seems to come so naturally. His dialog is believable and well thought out. The scenes he describes come to life and he can make the reader laugh, sigh or cry as appropriate to the moment about which he's writing. I don't want to give away any of this story other than to say it's about the struggle to adjust to one another when a couple that knows each other only a short time decides to marry. They have so much to learn about one another (which is why it is generally believed that couples know each other a couple of years before taking that long walk down the aisle). There is love, devoted friendship, anger, jealousy, betrayal, and deep sadness in this story. When I finished it, I just sat for a time and reflected on all it meant: its beauty; the ah-hahs I felt when I read sequences that I could identify with personally...the ones that made me laugh or sigh, and those that brought tears to my eyes. If you're thinking about a gift for the holidays, I'd recommend giving True Believer and At First Sight as a package to a good friend who enjoys stories of life, love and romance (by the way, the title for this book is most fitting). Carolyn Rowe Hill

An easy read with a strong emotional impact

Published by Thriftbooks.com User , 17 years ago
True to his previous novels, Nicholas Sparks has produced AT FIRST SIGHT in a similar style and pattern. The book is character-driven, with the emotional impact that protagonists in THE NOTEBOOK, MESSAGE IN A BOTTLE, THE GUARDIAN and THE WEDDING have left on readers. Jeremy Marsh, who we met earlier this year in TRUE BELIEVER, has a problem that he cannot solve. He is a writer by profession and has a syndrome called writer's block. While successfully writing for a scientific magazine and living in New York City, Jeremy took an assignment in Boone Creek, a tiny community in North Carolina. There he met Lexie Darnell, the local librarian, and put to test the ancient theory that "love at first sight" is possible. As the action picks up in AT FIRST SIGHT, Jeremy is abandoning his friends, apartment and cushy job in New York to make the move to the tiny rural town. After a whirlwind courtship, one night of sexual bliss and Lexie's revelation a bit later that she is pregnant, Jeremy proposes marriage. His life changes from that day forward. Facing deadlines from his editor on a column and new feature stories, Jeremy sits at the computer day after day, producing nothing. His professional skills have disappeared and no words come forth. In the meantime, Lexie's focus is on the wedding and baby. Her aunt Doris, who has raised her from childhood, is somewhat of a psychic and can predict the sex of the unborn. Lexie is convinced that her baby will be a girl. Emotionally burned in a previous marriage, Jeremy is not certain that fatherhood is a right path. He has escaped the situation and doubts his ability to perform the fatherly rites associated with the status. In fact, he has loathed the idea to this point. Sparks writes with clarity the emotion that Jeremy experiences; one concludes that the author may have lived through such uneasiness, or may have had close-knit ties to someone in a similar situation. Sparks's young newlyweds face the tests of instant marriage and subsequent parenthood with the joys and pitfalls that all lovers must endure. Jeremy's life change is more dramatic than his wife's; she lives in a comfort zone in familiar territory with family and friends, while Jeremy finds that adapting to a total change of circumstances is the challenge of his life. His career threatens a freefall, and emotional stability becomes nonexistent. Lexie's emotions run the roller-coaster of pregnancy, but she remains a constant source of stability to him. In this novel, Sparks attempts to answer the question, "How well do we really know the ones we love?" He writes of love, betrayal, endings that bring new beginnings, tragedies that lead to joy, and the insights of everlasting love. The story could have been a betrayal of the "manliness" so rampant in today's society, but the author redeems Jeremy's character with soulful insight and strengthens him by book's end. AT FIRST SIGHT is an easy read that should join Sparks's earlier novels in stature. ---
Trustpilot
Copyright © 2022 Thriftbooks.com Terms of Use | Privacy Policy | Do Not Sell or Share My Personal Information | Accessibility Statement
ThriftBooks® and the ThriftBooks® logo are registered trademarks of Thrift Books Global, LLC