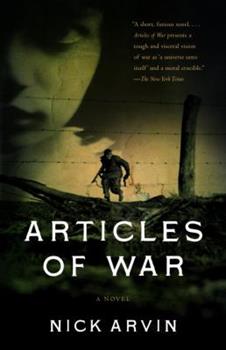 George Tilson is an eighteen-year-old farm boy from Iowa. Enlisted in the Army during World War II and arriving in Normandy just after D-day, he is nicknamed Heck for his reluctance to swear. From summers of farm labor Heck is already strong. He knows how to accept orders and how to work uncomplainingly. But in combat Heck witnesses a kind of brutality unlike anything he could have imagined. Fear consumes his every thought and Heck soon realizes a...

Should be Mandatory reading

Published by Thriftbooks.com User , 14 years ago
by all who care about anyone who has ever experienced war. This is a rivetting description of fear and the degredation of war told through the eyes of a simple, everyday American. The definition of courage is a central theme that crecendos with a surprising event. Not a pleasant topic but the book is so well written that I couldn't put it down until it reached a very unexpected ending. Cudos to Nick Arvin. Excellant writer!

Published by Thriftbooks.com User , 15 years ago
This story is a gem. It's compact, serene, and powerful. The writing is clear and sober. The main character is wonderfully complex, given the spare story and brief time we get to spend with him. I'd rank this up there with "Going After Cacciato" or "Slaughterhouse Five" for best war novels ever. "Articles of War" is a finely-crafted portrait of reluctance. Sample of prose: "It began to rain, and he wanted in his tent listening to the drumming of it. Idly, he tried to remember the songs his mother would sing in the kitchen, but he could recall only a phrase or two. He'd never been able to carry a melody himself. In the mess tent at lunch he sat alone. Then he pulled on a plastic rain poncho and set off to find Albert, Ives, and Claire at the chateau. While he walked the rain slackened to a misting drizzle, then tapered to nothing. Low wraits of fog rose from the hollows of the land, looking solid and sulky and unlikely to retreat before the feeble sunlight that filtered through the ashen clouds." When war comes, the writing is no less blunt or observant. When hard choices must be made, the interior thoughts of "Heck" are gripping and vivid. Just when you think you've got the sense of this novel, the plot takes an interesting and fascinating turn and you have to agree that war, as the book so bluntly makes clear, is a universe unto itself. I'm glad I own a hardback. Nick Arvin is a fantastic writer.

Published by Thriftbooks.com User , 17 years ago
A novella in the manner of The Red Badge of Courage, this is a tale of one soldier in WWII who finds himself to be a coward under fire. The point of view is extremely close. The author takes us deep within the perspective of Heck, the protagonist, and we never really come up for air. We begin with his arrival in Normandy a few days after D-Day. Close combat ensues very soon, and Heck sees some of the worst fighting of the war - the battles of Normandy, the Hurtgen Forest, the Battle of the Bulge. During an artillery barrage, for instance, the author gives no overview of what is going on, but merely traps the reader within Heck's perspective, cowering within a shell hole, dirt in his mouth, screaming. The close point of view is effective for getting deep within the soldier's state of mind. That is the biggest accomplishment of this book, to so strongly imagine the psyche of a young man under fire. One of the better novels I've read about war.

Published by Thriftbooks.com User , 17 years ago
In ARTICLES OF WAR Nick Arvin has, in this first Novel (he has previously published short stories under the name of 'In the Electric Eden: Stories') stepped into the echelon of writers who are able to credibly recreate the horrors of war without finding the need to justify the concept of war as a viable means for resolution of issues. This is an exceptional novel that relentlessly defines the passion, the fear, the atrocities, the visceral responses to the annhilation of fellow human beings, and places those responses squarely in the body of one terrified eighteen-year-old boy. The effect is devastating and the result is one of the most vehement antiwar novels ever written. George Tilson, nicknamed 'Heck' because of his refusal to use profanity, is a simple Iowa boy who by draft enlists in the Army to please his newspaper publisher father. He has no political fervor, no adolescent need to prove his virility: Heck simply knows how to follow orders, place training camp in the role of playacting, and accept his shipment to Omaha Beach, Normandy in 1944. A loner by nature, Heck observes his environment, is shipped to various campaigns, and remains a passive severely frightened youth. Once he is in battle he is horrified by the killing, the strewn dead bodies, witnessing the implosion of a recruit from a land mine, the stinging deaths of fellow soldiers, the look in the eyes of dead Germans, discovering the bodies of French victims, inadvertently sludging through corpses, the decimation of the landscape, the filth of living in rain-gutted foxholes. At one point he encounters a French family who befriends him and he is shown kindness by the young Claire with whom he finds momentary solace in the caves of France, becoming tangent to his emerging sexuality yet fearful of fulfilling his desires. The little family disappears and his quests to find them again are useless. His encounter with Claire and her gift of a tiny silver music box are his constant attachments to hope, to the concept that he may survive to find Claire again. The war eats Heck's soul and mind and eventually he follows the urge to find a way out of the battlefield by arranging his own gunshot wound to the wrist inflicted by a German sniper. This act of cowardice joined by his inability to find justice in the idea of war weakens Heck to the point that he is unable to eat without vomiting, and unable to hide from his shame of being a coward. Heck begins to harden after a certain incident and when he is assigned to a secret mission, he consents to go. The mission is to be a part of the firing squad that will execute deserter Pvt. Eddie D. Slovik, a mission that will forever haunt young Heck. (This incident is based on fact, as the author informs us at the beginning and end of the book.) How Heck deals with all these inward damages inflicted upon him by the war forms the final chapters of this intense book. The war ends and Heck is so incapacitated by his guilt that he signs

If you're into brilliant books

Published by Thriftbooks.com User , 17 years ago
Arvin's story collection was among my favorites in recent years, but I still hesitated to read this novel, fearing it was going to be bleak and depressing. But Arvin transports readers to a world that is singular and terrifying and yet strangely transcendent. Anyone who has ever enjoyed a dark, futuristic film will find the same otherworldliness in these pages -- a besieged countryside, a slowly breaking man, and the small victories that keep him surviving. There's no flinching in the telling; there's also no putting this book down once you're into the story. Brace yourself for the novel's climactic scene -- it's devastating and unforgettable.
Trustpilot
Copyright © 2022 Thriftbooks.com Terms of Use | Privacy Policy | Do Not Sell or Share My Personal Information | Accessibility Statement
ThriftBooks® and the ThriftBooks® logo are registered trademarks of Thrift Books Global, LLC