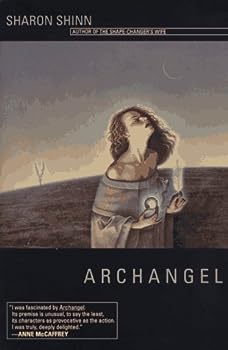 This description may be from another edition of this product. From national bestselling author Sharon Shinn comes a stunningly beautiful novel of a distant future--where the fate of the world rests on the voice of an angel... Through science, faith, and force of...

a religion without being religious

Published by Thriftbooks.com User , 15 years ago
Sharon Shinn has an interesting entry in the fantasy genre with Archangel. The book jacket gives away a little bit more than the novel does (though there are hints at something else going on behind the scenes), but some six hundred years ago God/Jovah brought humans to Samaria along with the angels which can pray to God for intercession. Since then the Archangel rules over all the angels and over all of Samaria. This year Gabriel will sing the Gloria, a yearly event which must take place or Jovah will smite the world, but he must sing it with his wife, the angelica. There is perhaps six months until the Gloria and Gabriel has not taken the time to learn the identity of who Jovah selected for his wife and when he finally locates her he learns that she has been a slave for the past five years and before that was part of a tribe which isn't known for orthodox beliefs regarding God and the angels. Her name is Rachel. She wants nothing of Gabriel, the angels, or Jovah. She is an angry woman, and understandably so. Readers of Archangel who are familiar with the Bible will see plenty of names which have Old Testament meaning and importance. Nearly all of the important angels during the past six hundred years and the humans who worked with the angels are biblically based and some of their actions reflect those of their Old Testament counterparts, but this is not a biblical retelling in a fantasy setting. How Sharon Shinn mixes the biblical into a believable fantasy setting is impressive. She builds a real story for Gabriel and Rachel and their relationship. It is something of a love story, but it is completely dysfunctional and it is very well written. Shinn's descriptions of the angels and their lives and how they pray for intercession from Jovah is more than overt Christianity. It fits into the context of the world and is more storytelling than preaching. This isn't a Christian novel and I do not believe it is intended to be. It's a well told story. Period. Since this is the first volume in a series of five books, it does an excellent job at setting up the nature of the world as well as hinting at other aspects of the world which are yet to be officially revealed. This is a self contained story and I do not know which characters future volumes focus on and so it may not be the continuation of this story. Then again, it may. Regardless, this is a world and an author I will revisit next with Jovah's Angel. -Joe Sherry

Published by Thriftbooks.com User , 15 years ago
This book is a love song. A song of romantic love and a love song to the god that the author has created to watch over her fictional world. As a singer, I was drawn into the power of singing that Shinn invokes in Archangel. If you are reading my review before you read the book and want a spoiler alert, DON'T READ THE BACK COVER OF THE BOOK. I was a little upset when I did so because a VERY important fact is revealed there that is not revealed in the book. I can only assume that it is revealed in part 2 or 3 of the trilogy which I will certainly read. Now that I have read it, I can appreciate what Shinn is calling the reader to ponder: What is prayer?, what is god?, what is love? I found myself considering these questions in the journey of this book. Shinn heightens the anticipation toward the end making this a real page-turner.

Published by Thriftbooks.com User , 20 years ago
First of all, concerning all those who believed this book was incorrectly labeled a Sci-Fi--you need to continue with the trilogy. SHINN is only starting with the bases of her story of this world and has a lot more to say. Secondly, I truly enjoyed this novel. Before reading Archangel, I would never lift a romance book or fantasy or Sci-Fi. The cover was so lovely and well done, I thought to give it a try. With in a matter of a two weeks I read the entire trilogy and ordered everything else she has ever written to devour in my spare time. Each book in the trilogy is different with unique characters and settings, yet all on the same world. I found it imaginative and engrossing.

Published by Thriftbooks.com User , 20 years ago
The author has created a world of colonists, where angels are mortal and communicate with God by singing in the upper atmosphere; oracles work with PCs; and a variety of groups exist within the social structure.The new Archangel, Gabriel, is destined to marry Rachel, whom he has waited too long to seek out. His predecessor, Raphael, an evil sort disinclined to give up power, has done his best to make things difficult. Rachel has some ideas of her own, and is not completely pleased with the arrangements.Gabriel must contend with both Rachel and Raphael as he prepares to meet a deadline for a religious ceremony. The story holds your attention as it moves towards an action filled conclusion.

Published by Thriftbooks.com User , 21 years ago
I typically stay away from science fiction, avoid books centered around romance, and scoff at the idea of angels and other religious matters. I picked this up only because I had liked Shinn's The Shape-Changer's Wife and was badly in need of something to read. Needless to say, no one was more astonished than I was to find that I loved Archangel. It definitely ranks among my favorite five books. Part of Archangel's appeal for me is inexplicable, but some can be attributed to the incredibly rich and intriguingly different world building (complete with legends, religion and economy) that never feels pointlessly detailed. Another factor was that Rachel is the one character in all my reading with whom I have best identified. I was surprised to find that I enjoyed the romance very much; it is done with extreme skill, which is a major change from multitudinous, anonymous bodice-rippers. For whatever reason, Archangel deeply affected me, and I am still thrilled every time I read it. Now all I want is to hear Rachel and Gabriel's duet... The latter two books (Jovah's Angel, The Alleluia Files) do not match the brilliance Archangel achieves, but they are still well worth reading.
Copyright © 2020 Thriftbooks.com Terms of Use | Privacy Policy | Do Not Sell My Personal Information | Accessibility Statement
ThriftBooks® and the ThriftBooks® logo are registered trademarks of Thrift Books Global, LLC