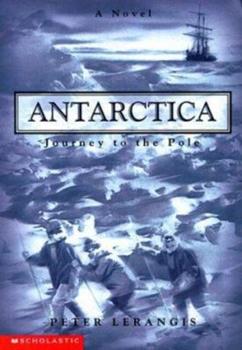 Antarctica: Journey to the Pole (Antartica, 1)

(Book #1 in the Antartica Series)

At the turn of the 20th century, a secret American expedition was made to discover the South Pole, headed by explorer James Winslow. Encountering harsh conditions and tensions among crew members, the crew aboard the "Mystery" was forced to retreat. This book relates the harrowing expedition and the year-long trek back to civilization.

A Thrill Not to be Missed

Published by Thriftbooks.com User , 19 years ago
What a thrill it wasto read this book. Such adventure. I got it for my fourteenth birthday and I can't wait to read the second volume. Thank you, Mr. Lerangis. You're my new favorite author!

Published by Thriftbooks.com User , 21 years ago
Journey to the Pole is a GREAT book. Right away it catches you. I absolutly LOVE this book. The end is AWESOME too. Even if you don't know much about Antarctica, you must read about it.

Published by Thriftbooks.com User , 21 years ago
And also an awful lot of fun for this adult!Exactly the kind of story I loved as a child, and still love now - kids out in the adult-world braving themselves against nature and most importantly, against their own fears and insecurities. The story is, of course, exciting - a trip to Antarctica in 1909 when such trips were not so easy. The author's realistic use of marine language, situations, and technology of the time adds to the authenticity of the story.What I appreciate so much about it, and what always drew me in as a child to stories like these, is that the youth in the story are not just helpless ignorant children, nor are they brainy super-kids that never seem to be wrong. They are very real teens - struggling with who they are and with their family and who and what is their sense of authority. In the course of the story, they learn and grow. Yes, they end up sometimes saving the day, but not in a trite way - when they save the day it is because they have grown past a fear, or grown into a sense of confidence in their own self, and taken a big psychological chance by expressing their authority, and that makes the situation real to the reader, and also shows the reader, especially the children readers for whom the book is intended, that what they are experiencing in their lives is real, and scary, and sometimes terrible, but that they can grow beyond it, and they can have hope that they will go beyond who they are now. Giving youth a sense of hope, and a sense that they are smart enough and good enough to make it in the world, and also showing them they will learn and grow into adulthood is so important, and books like this are great helpers.Although he book is written with a vocabularly and a sentence structure geared toward younger readers, the author does not "dumb down" to youth level, which is great. It's an awfully quick read for an adult, quicker even than Harry Potter prose, but for a youth, it's gotta be just about right - long enough to challenge, not so long that the child reader will get bogged down in detail and become completely lost in the narrative.I also appreciate the reality of it. Some reviewers have commented that it's maybe a little too realistic or grim or dark, but come on people - it's life. I'm glad my parents didn't feel the need to "protect" me, leaving me to grow into a functional adult human being. I'm glad Lerangis had the courage to include the scene of a man having his gangrenous feet axed off and of dogs dying in the cold, etc. Kids aren't stupid, and exposing them to real world issues isn't going to turn them into psychotics - it will turn them into normal adults who understand that a lot of stuff is dangerous, and who fear things realistically. Not that we need to add extra-realistic stuff to shock our kids, but we can't sugarcoat the world for them, either. People who are frostbit get their parts cut off. Dogs and people die in the cold. Ships get smashed by i

A thrilling adventure based on a true story.

Published by Thriftbooks.com User , 21 years ago
In 1909, after the death of his second wife, Jack Winslow andhis sixteen-year-old son Colin and fifteen-year-old stepson Andrew,along with a crew, set out the explore Antartica. Colin and Andrew resent each other, there are arguments among the crew, and the journey is long and difficult. And once they land, it's an even longer journey across Antarctica, that not everyone that sets out will survive. And back on the ship, Colin must deal with a mutiny among the small crew left behind. This was an excellant historical adventure story, different from many others for kids and teens. However, I do not agree with the classification of the book as one for ages 9-12. With the older characters and a story that would appeal more to older readers, this book would be better classified as one for readers 12 and up. I think teenagers who enjoy this type of book would be the best audience.

an adventure that will grip your imagination

Published by Thriftbooks.com User , 21 years ago
I know a thing or two about this period, having studied the turn of the century at length. It is an interesting era in which to set an adventure, because the world is opening up and the race to the poles is one of many subjects that must have consumed the imaginations of youngsters in that time. It seems like a great choice for a young adult book. I got a copy for my son, whose name is Jack, like the explorer, even though it will be a few years before he can read it (he's just 4). And I got another copy for my 12 year old nephew, who I am certain will devour it. I read it myself and found it exhilerating! A tale that cuts across the generations!
Trustpilot
Copyright © 2022 Thriftbooks.com Terms of Use | Privacy Policy | Do Not Sell My Personal Information | Accessibility Statement
ThriftBooks® and the ThriftBooks® logo are registered trademarks of Thrift Books Global, LLC