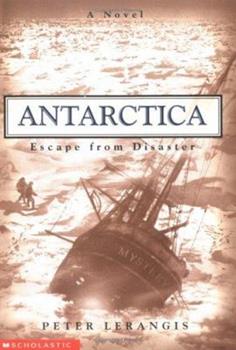 (Book #2 in the Antartica Series)

In the darkest hours of 1911, mutiny, doubt, and disaster threaten to destroy Captain James Winslow's secret expedition to the South Pole. The "Mystery" is frozen in the ice, and Winslow and his sons... This description may be from another edition of this product.

Published by Thriftbooks.com User , 20 years ago
This is an excellent book! I liked it better than the first one because of the humor; all the crazy conversations the crew has, Lombardo's songs, and Nigel's belief in the Yeti. Some other things I liked about it were: the crew and Captain Barth get bigger parts in this one than in Journey to the Pole, Kosta learns to walk without his toes, and Nigel and Philip both reform and end up being pretty nice poeple. I think everyone should read this book, even if they're older than the suggested age range.

Published by Thriftbooks.com User , 21 years ago
Jack Winslow and the crew on the Mystery, the crew that was to set victory upon reaching the South Pole, the crew that was to receive fame and honor for their bravery, are near death. Conditions forced them to retreat. And to leave the South Pole behind. If they would keep going, they'd die.As they escape from disaster and try to avoid the traitors aboard the Mystery, their lives are set against the toughest conflicts they've ever had to face. The conclusion, no doubt, is a conclusion stunning and surprising all at once.

Published by Thriftbooks.com User , 21 years ago
This part of the story is just as good and well-written as the first part.Exactly the kind of story I loved as a child, and still love now - kids out in the adult-world braving themselves against nature and most importantly, against their own fears and insecurities. The story is, of course, exciting - a trip to Antarctica in 1909 when such trips were not so easy. The author's realistic use of marine language, situations, and technology of the time adds to the authenticity of the story. What I appreciate so much about it, and what always drew me in as a child to stories like these, is that the youth in the story are not just helpless ignorant children, nor are they brainy super-kids that never seem to be wrong. They are very real teens - struggling with who they are and with their family and who and what is their sense of authority. In the course of the story, they learn and grow. Yes, they end up sometimes saving the day, but not in a trite way - when they save the day it is because they have grown past a fear, or grown into a sense of confidence in their own self, and taken a big psychological chance by expressing their authority, and that makes the situation real to the reader, and also shows the reader, especially the children readers for whom the book is intended, that what they are experiencing in their lives is real, and scary, and sometimes terrible, but that they can grow beyond it, and they can have hope that they will go beyond who they are now. Giving youth a sense of hope, and a sense that they are smart enough and good enough to make it in the world, and also showing them they will learn and grow into adulthood is so important, and books like this are great helpers. Although he book is written with a vocabularly and a sentence structure geared toward younger readers, the author does not "dumb down" to youth level, which is great. It's an awfully quick read for an adult, quicker even than Harry Potter prose, but for a youth, it's gotta be just about right - long enough to challenge, not so long that the child reader will get bogged down in detail and become completely lost in the narrative. I also appreciate the reality of it. Some reviewers have commented that it's maybe a little too realistic or grim or dark, but come on people - it's life. I'm glad my parents didn't feel the need to "protect" me, leaving me to grow into a functional adult human being. I'm glad Lerangis had the cour

Hope in the face of death.

Published by Thriftbooks.com User , 21 years ago
When their ship sinks in the ice of Antarctica, the crew of the Mystery despairs. They're in the middle of nowhere, and no one knows where they are. Setting out in their four lifeboats, the men soon lose two of the boats and many of their supplies. The two remaining boats are separated and are forced to make camp to do repairs. Jack Winslow, head of the expedition, and his son Colin, who are at one of the camps, set out on the chance that they will encounter another explorer or perhaps a whaling ship. In spite of the fact that this is a very small chance, they are determined not to give up hope. And at the other camp, Andrew, Winslow's stepson, rallies the men on, believing his stepfather will do everything in his power to find them. This is a great historical survival and adventure story, but it's really not a book that would appeal to many people ages 9-12, unless they really are interested in the subject matter. It belongs in the young adult section.

Published by Thriftbooks.com User , 21 years ago
After seeing the Shackleton exhibit at the American Museum of Natural History, my son (age 10) read all he could about Antarctic expeditions. He stumbled upon the first book in this series, Journey to the Pole, and was hook on the thrilling adventure. The second book didn't disappoint as the journey came to it's hair-raising conclusion. I can't recommend this pair of books highly enough!
Trustpilot
Copyright © 2022 Thriftbooks.com Terms of Use | Privacy Policy | Do Not Sell My Personal Information | Accessibility Statement
ThriftBooks® and the ThriftBooks® logo are registered trademarks of Thrift Books Global, LLC