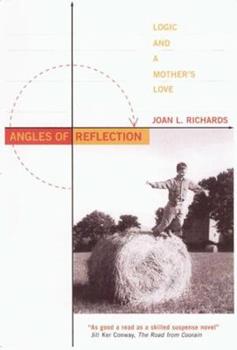 Angles of Reflection: A Memoir of Logic and a Mother's Love

At the time her nine year old son was diagnosed with a brain tumour, Joan Richards was deeply involved in writing a book about the life and work of the 19th-century mathematician Augustus De Morgan. Immersed in this abstract, logical world of science, Richards was forced by her son's sudden illness to confront a different kind of reality, the irrational world of a serious family illness and its consequences. A memoir, Angles of Reflection portrays...

Published by Thriftbooks.com User , 15 years ago
I read "Angles of Reflection" for a graduate course on untraditional history at Brown University, and as Joan Richards is our graduate advisor, she came to a class to discuss the book with us. The thing that struck me the most was that she said, "I just HAD to write this book". After you read it, you realize this book is a healing process, a way to come to grips with the whirlwind of drama that faced the Richards family as Ned's two medical mishaps came to light, and Richards' struggles as an academic and as a devoted mother. This book identifies the hardships academics face when the responsibilities of work and the devotion of family clash head on. I too highly suggest this book for those seeking careers in the academic field, but it is also a superb read for all. By the way, Ned is doing great, we too wondered about this :)

Published by Thriftbooks.com User , 22 years ago
I just spent the past Saturday afternoon reading _Angles of Reflection_ by Joan L. Richards and was quite moved by it. For anyone who has had to grapple with balancing work and family -- including in academics where one's schedule is flexible but at times consuming and unpredictable -- this book is a must read along with other similar volumes, such as _Divided Lives_ and _True North_. Richards's depictions of "mother's time" and "professional time", as well as the conflict between the two, could very well have been a chapter in Alan Lightman's _Einstein's Dreams_. German culture is not a very hospitable environment for working mothers, but Richards navigates skillfully through maternal care, professional meetings, and daily annoyances like sharply abbreviated hours for grocery shopping. Her depiction of the German medical system, a form of socialized medicine, might be looked upon as idiosyncratic and Byzantine by all except those of us who have to deal with American HMO's on a regular basis. Past and present, as well as life and art, overlap in this deliciously engrossing volume: as she cares for her son, Richards works through the intricacies of her biographies of Augustus and Sophia De Morgan and finds in their child, Alice, a parallel story of parental concern. Richards's story reminded me of a statement attributed to Jackie Kennedy Onassis: when asked about raising her children, she is supposed to have said, "If I fail at this, nothing else matters." Above all else, Richards's love and care for her two boys shine through this volume, even on pages dense with Newton, the De Morgans, and probability theory. This book, written in the tradition of Jill Ker Conway, is required reading for anyone, but especially for those curious about how the thinking lives of academics intersects with the practical and emotional lives of the everyday world. Highly recommended.

Many angles to reflect upon

Published by Thriftbooks.com User , 22 years ago
I have read this book twice, and recommended it to several friends, and find it a most complex and multi-faceted tale. On the one hand a poignant account of a sick child,and an examination of the difficult decisions everyone has to make under uncertainty, it is much more than that as it weaves Newton, Leibniz and Augustus de Morgan and the choices they made into the story. It was in many ways a brave decision of Joan Richards to write and publish this book, and those who read it can judge for themselves her success--I found it riveting, and even better on the second reading.

For the love of angles

Published by Thriftbooks.com User , 22 years ago
I want it for my mom she is and angle and she should be in this book!!!

Published by Thriftbooks.com User , 22 years ago
"Angles of Reflection" is a both a well-told story and interesting examination of how we deal with uncertainty. The main story--that of a mother and son dealing with the boy's serious illnesses--is compelling and poignant. The account of the fears and frustrations that Joan Richards faces as she struggles to care for her son will resonate with anyone who has cared for a sick child. While the story is a sad one, the love and courage it illustrates makes it enjoyable and ultimately uplifting. What makes this book more than just a good story is that Richards weaves into the book the account of her work, studying the Victorian mathematician Augustus DeMorgan. She connects DeMorgan's work on the meaning of probability with the terrible uncertainty she faces about the life of her son. As she tries to balance her work and caring for her son, Richards is haunted by a letter of DeMorgan's. The letter in which DeMorgam first proposes the famous "four color" problem was written just before the death of his daughter, and yet he seems completely unaware of her illness.Richards is both a talented novelist and an insightful scholar of mathematical history. The way she combines these two talents makes for a unique and wonderful book. I highly recommend it: it is the most enjoyable book I have read in a long time, and it also made me realize how the way we view the world scientifically and mathematically affects how we view it emotionally and personally.
Trustpilot
Copyright © 2022 Thriftbooks.com Terms of Use | Privacy Policy | Do Not Sell or Share My Personal Information | Accessibility Statement
ThriftBooks® and the ThriftBooks® logo are registered trademarks of Thrift Books Global, LLC