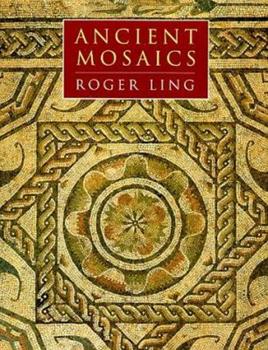 Using thousands and sometimes millions of pieces of colored stone or glass to create elaborate patterns or scenes is a painstaking and expensive way to decorate a surface. Yet the art of mosaic enjoyed spectacular success in the Graeco-Roman world, where its practitioners created some of the most beautiful artworks in history. This handsomely illustrated and elegantly written book traces the evolution of mosaic from the Hellenistic period to the early...

Published by Thriftbooks.com User , 15 years ago
Mr. Ling, as our tour guide, transports us back in time and from Africa to ancient England, sharing the history, development and travel/migration of this peculiar art form. His 'tour bus' stops frequently at wonderful examples as he shares bits of history, syles, techniques and other information quickly and painlessly. Aside from detailed instructions on "How To", Mr. Ling's book gives everything else one could ask for. Actually, one could make mosaics learning from this book, it just doesn't have that particular focus. I've only had the book for 13 hours so am anxious to get home and pick it up for another read.

Published by Thriftbooks.com User , 15 years ago
Roger Ling is a true scholar. He knows his subject and writes with clarity. He describes the method of creating a mosaic. This was a tedious task which required inserting a slender piece of baked clay or glass or marble into wet cement. Thus only a very small section could be done at a time. These pieces of baked clay are called tesserae. Some are one half inch by one half inch. Others are slender little guys only one millimeter by perhaps two millimeter. These were used to make a mosaic such as that of the doves found in the Capitoline Museum in Rome. Mosaics were placed on the walls, floors and ceilings. Most which survive are from the floor. This makes sense. When a building collapses most mosaics of the walls and ceiling would perish but conceal and protect the mosaic floor below. Mosaics were monochrome, also highly colorful. There was much experimentation. Some mosaics display a three dimensional effect. Some reproduce famous paintings. Some display reproduction of a painting with modifications made by the artists or the patron of the piece. Some of the experimentation in mosaics ended up influencing architectural design. I suggest reading Pinto's and MacDonald's Hadrian's Villa and Its Legacy. Studies are under way to trace mosaicists works found in areas stretching over large parts of Italy and Europe. Mosaic patterns in various rooms can be used on occasion to determine what use that room had. Evidently mosaics in triclinia (dining rooms) were designed to generate discussion. I would highly recommend reading Linda Farrar's Ancient Romans Gardens after reading this book.

Published by Thriftbooks.com User , 21 years ago
This title is absolutely worth every penny. Though weighing in at only 143 pages, it is deceptively meaty and educational. The 106 selected photos (47 color and 49 B/W) are crisp, beautiful, and plentiful, and the inclusion of a maps and a glossary were also helpful. The mosaics selected for illustration are sublime, and even those ravaged by time are hardly less beautiful for it. Chapters are (in order) Intro, Greek Period, Roman Italy, Roman North-West, Roman Africa, Wall and Vault Mounts, and Context and Meaning. In a book of this length each chapter is necessarily short, but the examples chosen to illustrate each section are well-chosen to guide further study in selected areas.

Published by Thriftbooks.com User , 23 years ago
I really appreciate scholarly works like this book. I've been trying to find a good book on the history of mosaics that is - in-print - and this is it! Excellent documentation! Not too - dry - of a read either. A big thanks to Roger Ling for the enlightenment. Beautiful photographs, wish there were a-whole-lot more.
Copyright © 2022 Thriftbooks.com Terms of Use | Privacy Policy | Do Not Sell My Personal Information | Accessibility Statement
ThriftBooks® and the ThriftBooks® logo are registered trademarks of Thrift Books Global, LLC