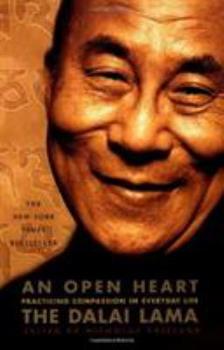 An introduction to the core of Buddhism by its greatest teacher, An Open Heart is the successor to the bestselling The Art of Happiness, the Dalai Lama's clear and simple guide to finding compassion and happiness. 25 photos. (World Religions)

Buddhism in a nutshell

Published by Thriftbooks.com User , 14 years ago
This book is a general introduction to Tibetan Mahayana Buddhism. It covers a whole range of topics including the three jewel of refuge, karma, equanimity, loving-kindness (the wish that all may enjoy happiness), bodhicitta (the motivation to serve all people), emptiness and more. The book describes the different levels a student of Buddhism proceeds through as he achieves greater and greater enlightenment. These levels range from the beginners task of conquering personal faults, such as anger, all the way up to Buddhahood (the highest form of understanding of reality combined with the desire to benefit all sentient beings). All this is achieved through the practical methods of analytical meditation and settled meditation. In analytical meditation rational thought is applied in order to generate a specific quality, such as patience. In settled meditation the practitioner remains fixed on a feeling, or object of contemplation, without thought. is in fact a summary of Kanalasha's , Togmay Sangpo's and Langri Tangpa's . These are the central texts of Tibetan Buddhism. As I have tried to indicate above, despite the subtitle of the book, this work is not exclusively on compassion (the desire to alleviate the suffering of all beings). Compassion is a very important part of Buddhism and indeed chapters seven to ten concentrate specifically on that subject. There are fifteen chapters in all. The Dalai Lama is a very clear speaker who has set as his task the aim of introducing the world to Buddhism. As a result this book is very easy to follow and would be ideal for someone seeking a first time encounter with Buddhism. I would have to note, however, that so much material is cover in such a brief way that the book could be said to lack substance. It does not contain meaty discussions. The reader is left with a desire to follow up his new-found interests by reading other books probably written by other authors. I should also note that while the two methods of meditation are discussed very few practical suggestions are included. The book does not contain a step by step guide or how-to section.

Accessible Wisdom! ....in a compact format

Published by Thriftbooks.com User , 18 years ago
I found this book to be very true to its title. It short and sweetly explains how to open your heart to more compassion in your everyday life. Accessible wisdom for people of many religious backgrounds. I do not think that it can (for most people) stand alone as a textbook on compassion, but as an avid reader of Buddhist/Taoist/Hindu/Christian texts I feel that it has helped me to focus my thoughts on compassion in a very real way. I would recommend it to ANYONE seeking to open their heart to others, but I would also recommend that you not stop with this one text. So far, I have enjoyed all books that I've read by His Holiness The Dalai Lama and I think "How to Practice" would make a good companion(it is also short and sweet, however it does center around Buddhism).

Pathway to a Better Life and a Better World

Published by Thriftbooks.com User , 18 years ago
I'm not a Buddhist scholar, nor am I a Christian theologian. This book puts forth a tremendously powerful approach to dealing with interpersonal, as well as international, problems. The Buddhist teachings on compassion are numerous and complex. However, this book provides a clear discussion of the benefits of compassion and the use of specific meditation techniques to foster it. It seems that these teachings integrate well with Christian, Islamic and other religious frameworks. If more religious fundamentalists took these teachings to heart, terrorism would wither and die of neglect.

A Message for East and West

Published by Thriftbooks.com User , 21 years ago
An Open Heart is an interesting book and informative book. The Dalai Lama has a strong message for both Eastern and Western Civilizations. For the West he says, I think that anger and hatred actually cause more harm to us than to the person responsible for the problem. He tells us, in essence, to give being victims to our anger and hate. This message is also being presented more and more frequently by American authors who have been trained in western psychology but have modified their training to incorporate more advanced spiritual concepts ? See An Encounter With a Prophet by C. A. Lewis and There is a Spiritual Solution to every problem by Wayne W. Dyer. The Dalai Lama also has a strong message for the East. He provides a new interpretation of The Third Nobel Truth of Buddhism - Suffering ceases when attachment to desire ceases. In the past this ?Truth?, also contained in modified form within the Hindu religion, has caused many sincere followers of both religions to content themselves with poverty. He tells his Buddhist followers living in poverty, ?You yourselves must make effort; you must take initiative, with self-confidence, to bring about change. An Open Hear is definitely a worthwhile read.
Trustpilot
Copyright © 2022 Thriftbooks.com Terms of Use | Privacy Policy | Do Not Sell My Personal Information | Cookie Preferences | Accessibility Statement
ThriftBooks® and the ThriftBooks® logo are registered trademarks of Thrift Books Global, LLC