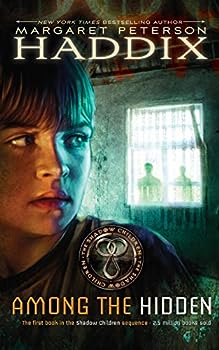 Among the Hidden (Shadow Children #1)

(Book #1 in the Shadow Children Series)

In a future where the Population Police enforce the law limiting a family to only two children, Luke, an illegal third child, has lived all his twelve years in isolation and fear on his family's farm... This description may be from another edition of this product.

Published by GAMomof7 , 1 year ago
Among the Hidden is about a 12-year-old boy named Luke, who is a third child. The oppressive government made a law that you may only have 1-2 children, not any more. But Luke is a third. He isn't allowed outside, to have parties, or to even go in rooms without the shades down. Then, one day, he finds vents he can secretly look out, and in a window of a house with 2 children, he sees another child. A third. Like him. Jen is a lot different. She wants to be free, have a rally. Can Luke make the ultimate choice: to go, or to stay?

My Grandson Wanted To Read This Series But...

Published by JODY DYAR , 3 years ago
My Book Arrived...Record Time... It Was A Paper Back... I Was Supposed To Recieve A Hard Cover.

I loved this book. My son and I read it together. It was very really realistic.

Published by Thriftbooks.com User , 4 years ago
I loved reading this book as a kid. It's an easy read with short chapters. This author is absolutely amazing!!! An absolute page turner, she keeps the reader interested the whole way through the book. 100% recommend!!!

Published by Thriftbooks.com User , 17 years ago
If you want to start reading a good book series, you may want to grab this book. This is the first of several books. In this one, you get all of the background information. Luke is a third child in a futuristic society, where families are only allowed to have two children. His parents hide him away and he knows a quiet family life, one in which he is made to hide a lot and keep quiet, so that the population police will not know that he exists. It is a lonely life for Luke, who wishes he could go outside and play, like his brothers do, and also go to school, to leave the house and go anywhere. When the land behind their farm is developed into a neighborhood, Luke is shocked to meet another child like him, Jen. She tells him all about other "shadow children" who live hidden away from the rest of society. When Jen tells him about a big rally that she's organizing to support the hidden children, will Luke risk his life by going to it? Does he trust his new friend with his life? Read this book and you'll find out. It will definitely keep you on the edge of your seat (and you'll want to have the 2nd book in the series, "Among the Impostors" ready and waiting to read when you're done with this one).

Published by Thriftbooks.com User , 20 years ago
When you read Among the Hidden, Luke?s dilemmas and reactions will keep you on the edge of your seat. Margaret Haddix has a unique style of writing that hides surprises on every page. Luke is a child who has never been to school or had any friends. The boy is a shadow child, a third child banned by the Population Police. He lives his entire life hiding and now, with the new house development replacing his family?s woods, he is no longer even allowed to go outside. Luke cannot even eat with his family for fear that he will be seen. His parents make him eat in the stairway leading up to his room, which is in the attic. The stairway is now the only place he can go. If the shades are down, he still can?t go out of the stairway. But Luke discovers a vent in the corner of his room. Every day that he can, Luke looks out the vent to watch the houses being built. One day his family is in such a rush that they forget to pull the shades up. Luke decides to surprise his mother by cleaning up the house and baking bread. The radio is even turned on very, very quietly. There is a problem though, his father comes in early for lunch and Luke is caught. After Luke is caught, he is sent up to his room to hide one again. But Luke is determined to stop hiding. To find out Luke?s plan to stop hiding, read this amazing book.

Published by Thriftbooks.com User , 22 years ago
This is an excellent book about a time of government control supposedly brought on by population problems and Food Wars. Luke is a forbidden third child, whose existence is sheltered by his family's rural life. Then the government seizes part of their land to build luxury houses for the "Barons." These people of privilege have many things ordinary folks don't. One of the "Barons" also seems to have something Luke's family has, a third child.

Published by Thriftbooks.com User , 22 years ago
Among the Hidden was a great book and an absoulute page turner! I loved the book and was unable to put it down for 2 days. I don't know how to explain the book.With Luke's farm and very few appliences you think you are looking at a hard life from the past but when he meets Jen it is like a whole new world opens for him. Being hidden seems hopeless for Luke until he sees Jen's view. She may not be allowed to be 'FREE' but she still knows a way to make a good life out of captivity. Luke gets a daring chance to make history with Jen, but will he go? Or will he stay at home like a coward, safe, but coward? You have to read the book to find out, but once you do, trust me, you won't regret it. I am now searching for another novel by Haddix, and praying it is as good! :)
Trustpilot
Copyright © 2022 Thriftbooks.com Terms of Use | Privacy Policy | Do Not Sell or Share My Personal Information | Accessibility Statement
ThriftBooks® and the ThriftBooks® logo are registered trademarks of Thrift Books Global, LLC