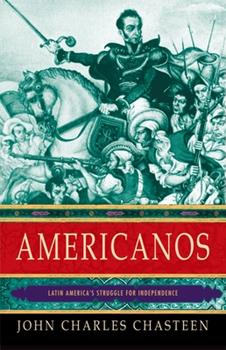 (Part of the Pivotal Moments in World History Series)

Do not overlook América's history

Published by Thriftbooks.com User , 12 years ago
América para los americanos. This is an outstanding book that gives a good introduction to América's independence process. For some reason, América's history has been neglected and overlooked by Europeans and North American. That is why Chasteen's work is so valuable and appreciated.

Published by Thriftbooks.com User , 13 years ago
Good read! The author presents a fairly well balanced and informative historical account of the circumstances surrounding the independence of Latin America. The Book ties the struggle in with events in Napoleonic Europe well to frame a context other than just domestic grievances with colonialism. A very good account of the politics of revolution at the time in both Europe and the Americas, and how the ideas of the French revolution were an irresistible force at the time. The author (wisely) resists the temptation to draw parallels to Modern events in Bolivar's nation. There is plenty of information on the topic of Hugo Chavez-Frias, and it would have been inappropriate in this volume. However, by looking at how the revolution was largely about political, popular sovereignty and not social or economic upheaval the reader can draw their own conclusions. More depth could have been applied to the military campaigns of San Martin and Simon Bolivar; however the book was not billed as a military history volume. Of particular interest as a military historian would be more depth about how armies were able to operate given the considerable challenges the Andean Ridge poses to a 19th non-mechanized force.

Chasteen has gone where anybody has gone before.

Published by Thriftbooks.com User , 13 years ago
Professor Chasteen has gone where nobody has gone before; when it comes to writing about America (with the accent) in the English language. His work is appreciated greatly.

Published by Thriftbooks.com User , 14 years ago
This book is perfect for you, if you, like me, recognize names of South American history but can't identify them. It's also perfect for you, if you, like me, have wondered how the US became a sea to sea country and to the south, a number countries were formed from only two monarchies. The professor cuts away the details. He tells the stories behind the famous names. He explains the significance of the famous places. He gives both characters and places shading. He notes the women and their influence. He tells what became of these leaders once the revolutions were complete. What is amazing is how in such a compressed time, so many independent actions had similar results. It is also amazing how poorly the revolutionaries fared after they accomplished so much. Readers learn how events in Europe affected the direction of the Spanish and Portuguese colonies. In the last chapter, the author ties up the centuries showing how the conservatism reflected in early patriots "wearing the mask of Ferdinand" remained in the culture retarding the full promise of democracy by electing leaders representing the ruling class. If you know about this history, this is not the book for you. But if your knowledge is sketchy, you can get a footing in this short quick read.
Trustpilot
Copyright © 2022 Thriftbooks.com Terms of Use | Privacy Policy | Do Not Sell My Personal Information | Cookie Preferences | Accessibility Statement
ThriftBooks® and the ThriftBooks® logo are registered trademarks of Thrift Books Global, LLC