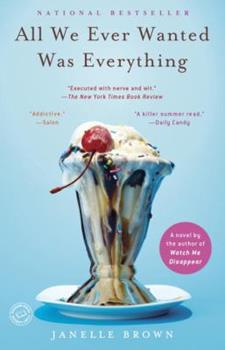 All We Ever Wanted Was Everything

On the day Paul Miller's pharmaceutical company goes public, he informs his wife, Janice, that their marriage is over and that the new fortune is his alone. Meanwhile, in Los Angeles, the Miller's older daughter, Margaret, has been dumped by her hot actor boyfriend and is failing at her job, kind of spectacularly. Sliding toward bankruptcy, Margaret bails and heads for home, where her confused and lonesome teenage sister, Lizzie, is struggling with...

Published by Thriftbooks.com User , 13 years ago
All We Ever Wanted Was Everything, by Janelle Brown, was the type of book I both wanted to linger over, to make it last, and to zip through, because it was hard to put down. Enough reviews reveal the plot that I won't repeat. The book begins with a bang and never slows down. Brown interweaves the stories of three main characters, Lizzie, Margaret and Janice flawlessly. Each woman has her own set of issues and the voices are strong,distinct, and memorable. My only (slight) disappointment came at the very end of the book, where I would have preferred to see more, or a different, ending. Highly recommend. By the author of the award winning book, Harmonious Environment: Beautify, Detoxify and Energize Your Life, Your Home and Your Planet.

Published by Thriftbooks.com User , 13 years ago
Janelle Brown's debut novel pulls back the curtain on "the good life" in Silicon Valley. Just as Janice Miller's family reaches for their moment of triumph as her husband's pharmaceutical company goes public, making the Millers multimillionaires on paper, Janice's world crumbles around her in a day. The story covers the following summer as Janice slides into despair, along with her fourteen-year-old daughter Lizzie, who is looking for validation in all the wrong places; and her former wunderkind daughter Margaret, now 28, who is returning home from Los Angeles, in debt and without direction, after her feminist magazine has failed. Janice's husband Paul is a mere phantom in the story, practically gone before he left, an entitled, ruthless, self-proclaimed "libertarian" Wizard of Oz figure. Janelle Brown's keen eye for detail and razor-sharp wit keep the story afloat, but there is little but despair and missed chances for connection between the Miller women. I am giving the book 5 stars based on its literary merit, but as a reader I wished that the story had continued a little farther down the path of redemption and transformation. Perhaps it was a braver artistic choice not to make it that easy for the characters or the book's readers. As sad as these three women are, on a metaphorical level I recognized a part of myself in each of them. Brown takes each woman to the edge of destruction, but she always maintains a sliver of their essential humanity. The bonds between mother, daughter, sister are stretched to the limit but do not break. This would be an intriguing book club read. I'd love to talk with others about ambition, feminism, judgment, redemption, and the complex nature of Brown's attitude toward her characters. I just finished reading the book and I have a feeling my reaction will evolve over time. Brown's writing is specific and original and at the same time her novel brings to mind a number of other works: women in limbo, not yet responding to their wake-up call as in Meg Wolitzer's The Ten-Year Nap; the suburban self-destruction of Tom Perrotta's Little Children (with less sex); and the biting social satire of Perrotta's Election. Finally, the Miller women's propensity to turn to boys and men again and again to escape or solve their problems could be a case study out of Leslie Bennetts' The Feminine Mistake.

Published by Thriftbooks.com User , 13 years ago
I confess that I was drawn to this novel partly by its catchy title, and I picked it up on impulse at Costco (of all places!) But I am incredibly glad I made this purchase, as this is a sharp, fabulously written, insightful novel from a writer about whom I think we will be hearing for some time to come. *All We Ever Wanted Was Everything* is edgy social satire that incorporates withering, significant social criticism. It's a draw-you-in read that never becomes tiresome. I was sorry to see it end! Its main focus is the problems and inner lives of three principal female characters (sorry, you can't have everything; men are definitely relegated to the background here). Each of the Miller women represents a recognizable type within contemporary American society, revealing how even "having it all" does not mean that life becomes easy or uncomplicated. Clearly, a major theme here is that behind the facade of wealth, success, and comfort, people (in this case, women) who live the American Dream in places like the Santa Clara Valley struggle and suffer in a variety of ways. For me, the most impressive characteristic of Brown's narrative is her uncanny ability to "get inside the heads" of her characters, thinking along with them as they react to events and rationalize their sometimes self-destructive behaviors. Brown is able to reproduce the inner voices of a fifty-ish career executive wife, a former academic *wunderkindt* turned frustrated feminist social critic, and a bufuddled, love-starved teenager. Their confused, sometimes pathological behaviors somehow come to "make sense" within the sharply drawn context of who they conceive themselves to be and the ways they perceive their life-situations. In short, this is a terrific, funny, intelligent novel that is both entertaining and insightful. Janelle Brown can flat-out write. I look forward to her next novel with eager anticipation.

The title, the book, everything about it.

Published by Thriftbooks.com User , 13 years ago
I happened upon the book, decided to give it a try and was drawn in immediately. Reading it on my commute each morning, I immediately wished I lived further from work. It starts with a suburban facade and a dash of self-delusion, a promise of wealth ... and then the characters' quirks start to reveal themselves. Lies are protected, hopes dashed then resurrected then dashed again, and characters try to find some inner store of ... ok, character, for the most part. Though other words might apply. I can't wait until friends of mine read this so I can discuss the plot. I'd love to see this as a movie, frankly. It caught my imagination in that way. What excellent roles these would be. There's humor, there's disfunction that will seem familliar, there's audacious tenuous balance and plenty of momentum. I can't believe this is a first novel. (Disclaimer: some time ago I worked with Janelle Brown. However, I knew her as an amazing journalist but had no idea she could craft a novel like this!)

Gaining wit and worth on the way to "Everything"

Published by Thriftbooks.com User , 13 years ago
I read Brown's book "Everything They Ever Wanted Is Everything" in a single sitting. Its completely gripping -- alternating between a quick-paced narrative that's deftly edited and hilarious social observation. Brown's subject is ambition, in this case of her three female protagonists: Margaret, a flailing feminist 'zine editor in Los Angeles, who keeps up appearances using credit card debt; her little sister, Lizzie, so mired in teenage sexual angst she bounces from being the school slut to a born-again christian; and their mother, Janice, an epicurian country-club member blind-sided by her wealthy husband's decision to divorce. The father's departure sets the novel in motion, and each woman's attempts to keep up appearances is the narrative's engine. The backdrop of the story is Santa Rita, a Silicon Valley-esque Californian town that sizzles with keeping-up-with-the-Jones's nosiness and consumption. Brown succeeds in evoking cliches and then breaking them with great humor -- clearly getting "Everything" requires her characters to come through personal crises quite scathed but with a new sense of of their own wit and worth.
Copyright © 2022 Thriftbooks.com Terms of Use | Privacy Policy | Do Not Sell My Personal Information | Accessibility Statement
ThriftBooks® and the ThriftBooks® logo are registered trademarks of Thrift Books Global, LLC