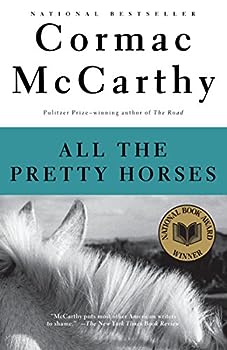 All the Pretty Horses (The Border Trilogy, Book 1)

(Book #1 in the The Border Trilogy Series)

This description may be from another edition of this product. The national bestseller and the first volume in Cormac McCarthy's Border Trilogy , All the Pretty Horses is the tale of John Grady Cole, who at sixteen finds himself at the end of a long line of Texas...

Published by Thriftbooks.com User , 15 years ago
A lot has already been said about this novel, so I'll address my review to those unfamiliar with Mccarthy's work. If you've never read Mccarthy before, this is a great place to start. The plot is tight, engaging, and easy to follow, and the language is gorgeous. If you enjoy this book and want to move on to others, read the others in the border trilogy before tackling "Blood Meridian." Some people will take issue with Mccarthy's grammar, sentence structure, use of Spanish, and punctuation (or lack thereof). Mccarthy takes a lot of poetic license with his writing, and chooses words as much for their sound as for their meaning. The sentences are written with attention paid to rhythm and "breath," meaning that they don't always look or sound like conventional prose. This will be displeasing to some. As an example, the first line of the book reads: "The candleflame and the image of the candleflame caught in the pierglass twisted and righted when he entered the hall and again when he shut the door." Now, Mccarthy could have just as easily said "the candle flickered when he entered the room," or something like that, but the effect, aurally, is just not the same. Read the first page of the book. If you don't catch fire at the beauty of it, then maybe this book, and Mccarthy's work in general, is not for you.

Published by Thriftbooks.com User , 20 years ago
Many people compare, fairly or no, Cormac McCarthy's "All the Pretty Horses" to William Faulkner's literary work. What is neglected is the strain of Flannery O'Connor that runs throughout the novel as well. At any rate, "Horses" more than stands on its own as a startling achievement. It's prose is more accessible than Faulkner, and its themes less esoteric than O'Connor. "Horses" is an immaculate novel, dealing with the extreme facets of the everyday and the ways in which people become who they are.John Grady Cole, a 16 year old boy, dispossessed of his family lands, wanders off into Mexico, accompanied by Lacey Rawlins, a close friend. Astride their trusted horses, Redbo and Junior, the two young men ride, searching for occupation and meaning. It may be somewhat idealistic that two ranch-hands like Cole and Rawlins should ride about, discussing throughout the novel things like the profundities of religion, life, and human relationships on so advanced a level, but McCarthy's grasp of vernacular - English and Spanish - makes the whole completely palatable. McCarthy's writing technique leaves nothing to be desired - his evocative use of landscape draws the Texas-Mexico scenery off the page and into immediate experience. Impressionistic and yet utterly tangible, the cold of the evenings and the heat of the days is described as it is felt. McCarthy's characterization is just as remarkable. Minor characters like the various groups of laborers met along the way, Perez the mysteriously powerful political exile/prisoner, or children bathing in a ditch - all bring realism and depth to Cole's struggle into selfhood.The most wonderful thing about "Horses" is that McCarthy doesn't beat you over the head with his major themes - they exist as constant undercurrents - humanity's relationship to tradition, the divine, to each other - these are the elements that course and pulse through the novel. Epic knife-fights in a Kafkaesque prison, emotional wounds that never heal, a covert love affair with Alejandra (the daughter of a powerful Mexican landowner), philosophical-historical conversations with her aunt Alfonsa, a problematic relationship with 'Jimmy Blevins,' a possessive young boy - all of these moments in the novel are saturated with fundamental thematic significance. This is not a book to simply read. This book must be lived with, carried, held, gazed upon and treasured. Give it full reign of your mind and let the unknowable horses of your imagination take you into yourself.

Published by Thriftbooks.com User , 21 years ago
I found this book on an empty, dusty bookself at the back of my high school library, it's cover and first few pages torn away and the corners burned round. I thought that either someone was very bored and destructive or frustrated by the difficulty of the first few chapters (this only after flipping it open to find out it's title, the side being illedgable). After reading it I realize it could even more easily have come from the frustration of wanting more! This book kept me reading from cover to cover and still awake enough to wish it were double it's size. While reading it I had no clue as to it's popularity or award, but I knew it deserved one. John Grady Cole is an amazingly believable hero. I found myself trusting him and not the author to carry the book, knowing that he would come through no matter what. Even as the dialogue turned increasingly to spanish I felt that there wasn't a need to understand every word, I knew Grady enough to know what he would say. After getting a friend to translate a bit I found that this was true. I can only hope the movie is even half as good! I'm going to buy my school a copy to replace the destroyed version that I found.

Published by Thriftbooks.com User , 22 years ago
All the Pretty Horses grabbed me from the outset by its alternately terse and unusually descriptive prose. The hero, John Grady Cole, appeared to me as the apotheosis of young manhood--valiant, honest, and smart--and seemed at times to have been blessed with the noble soul of a fabled knight. That McCarthy highlighted Cole's fallible traits--such as naivete and (occasional) recklessness--eased my own ability to find strains of myself in Cole as I reflected on my own view of the world as a young man. His equine and topographical descriptions can be a bit much at times, but I often found myself rereading passages in astonished admiration. His disregard for grammatical convention is more than compensated for by his poetic passages. The to-the-point dialogue between Cole and Rawlins , Cole and his father, and Cole and everybody else, come to think of it, underscores Cole's strength, and yields a great impact whenever he speaks. The violent scenes are well-written and highlight the idea that life--particularly life in the Southwest for the last cowboys--is a battle. Women may not like this book, for it is largely about the pain and rewards of becoming and being a man. I urge anyone who picks it up to stick with it and not to fight McCarthy's tide. In sum, I was extremely moved by All the Pretty Horses.
Copyright © 2020 Thriftbooks.com Terms of Use | Privacy Policy | Do Not Sell My Personal Information | Accessibility Statement
ThriftBooks® and the ThriftBooks® logo are registered trademarks of Thrift Books Global, LLC