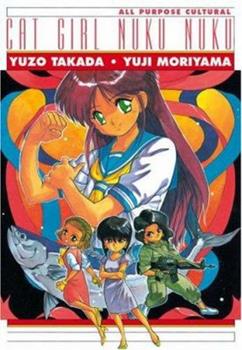 by Yuji Moriyama and Yuzo Takada

When inventor Kyusaku Natsume transfers the brain of his son Ryunosuke's cat into a top secret android body, he doesn't lose a family pet...he gains a daughter! Nuku Nuku may appear to be a teenage girl, but her cute and cuddly exterior hides both the superhuman strength of the world's most advanced android chassis and the lightning quick senses and reflexes of a domestic feline. She'll need these abilities to defend Ryunosuke from the forces of Mishima...

Published by Thriftbooks.com User , 17 years ago
It's Finally here! With the manga boom over the past couple of years, I've been waiting for the book publication of one of my favorite anime series: All Purpose Cultural Cat Girl Nuku Nuku! The back of the book reads as follows: "When inventor Kyusaku Natsume transfers the brain of a rescued cat into a top secret android body, he doesn't lose a possible pet...he gains a daughter (har har har)! Nuku Nuku may appear to be a teenage girl, but her oh-so-sexy exterior hides both the superhuman strength of the world's most advanced android chassis and the lightening-quick reflexes of a domestic feline (not mine!) She'll need these abilities to defend her new brother, Ryunosuke, from the forces of Mishima Heavy Industries, a giant conglomerate run by the world's most ruthless businesswoman, Akiko Mishima-and she just happens to be Ryunosuke's mother! Nuku Nuku might be determined to protect her brother, but her catlike cunning and mechanical muscle may not be enough to stop a custody battle that will soon become an all-out war!" These stories follow closely to the original OAV Nuku Nuku (perhaps NNTV in one case). A general knowledge might be helpful in understanding what's going on, but it shouldn't be that difficult to follow if one is new to the stories. The price is a bit steep ($14.99), but there are some fun things that come with it! This book has lots of fan-friendly stuff! It includes animanga (color stills set up in a comic book fashion) and several original short stories, including one with the original gray-haired Nuku Nuku. Fans will also enjoy 16 fun postcards inserted at the back (though I would never have the heart to remove them ^-^). Each one is different and they show a majority of the OAV characters and machines. This book is definatly a good purchase for those who are avid APCCGNN fans (like me), but may seem a bit too pricey as an introduction to the series. My suggestion for those interested in starting this series, look into buying the OAV dvds, they are finally available.
Trustpilot
Copyright © 2022 Thriftbooks.com Terms of Use | Privacy Policy | Do Not Sell My Personal Information | Accessibility Statement
ThriftBooks® and the ThriftBooks® logo are registered trademarks of Thrift Books Global, LLC