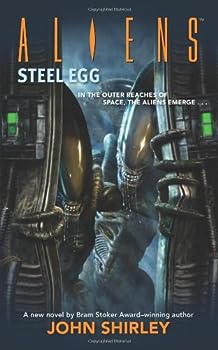 This description may be from another edition of this product. Someone on Earth knew about the aliens. Someone battled them, and survived. Before Ripley, there was a first encounter. Aliens and humans have fought before! When a human spaceship discovers a vast...

" . . . the alien dropped to the deck and charged . . . shrieking wordless primeval hatred as it cam

Published by Thriftbooks.com User , 11 years ago
With "Steel Egg" the baton on writing novels in this second series of Alien novels is passed on to stalwart science fiction writer, and one of the godfathers of both the cyber and splatterpunk movement John Shirley. For some reason I found this novel the best of the Alien novels so far. Still, I suspect that somebody's 401 k plan was in need of a quick cash infusion as this was the last of Shirley's media projects for Dark Horse. The others being two Hellblazer novels ("Warlord", "Subterranean"), a Predator novel ("Forever Midnight"), plus he was responsible for two novelizations ("Constantine", "Doom") and a Batman novel ("Dead White") for other publishers, all within a two-year period. In his spare time I'm sure he was brokering world peace, curing cancer, and inventing a new ice cream flavor ("Citrus Cyber Crunch") for Ben & Jerry's. But that is all neither here-nor-there as far as "Steel Egg" goes. "Steel Egg" is a novel that takes place BEFORE the events that happened on the "Nostromo", and here the crew of the good ship "Hornblower", of the United Nations Interplanetary Corps discovers a vast egg-shaped vessel out in Saturn's orbit. While this is a surprise to the crew, a close examination of their orders show that "The Company", an influential entity that was behind the push to get the "Hornblower" out there to take a look-see, may very well have had an inkling that the alien vessel was there. So, people being what people are, the captain decides to go have a look-see, and this being an Alien novel, we all know that this is not a wise move, and not one that will end well for anybody. Inside they find a huge area that is broken up into a labyrinth of workstations and sections, and finding that the air inside the ship is good enough to breath, they pop their suits. Continuing to explore, they find an alien personal transporter, a workstation with a computer that has a blinking warning light in the shape of a spider (hmm), and then they activate a hologram which shows one of the ship's crew getting attacked by a full grown xenomorph. As they continue their explorations, they discover a desiccated alien crewmember, a way to open transportation tunnels in the ship, and some living eggs, and in the time-honored tradition of the overconfident doing stupid things, one of our intrepid explorers decided to stick their face just where they shouldn't, and, well you know the rest. And in yet another time-honored tradition, the explorers decide to bring the infected crewmember back to the "Hornblower" for examination. Again, this is a move that never quite works out the way that it was intended. Soon a baby alien starts running around, then crewmembers start running around in a panic, then more aliens start running amok picking off crewmembers, and then the surviving crew members start running to the alien vessel to escape, and then things start to get really difficult as a competing corp. shows up. "The Chinese/Asian-Nation Coopera

Published by Thriftbooks.com User , 13 years ago
WOW!! this was a great book all the way through, thought the ending could have been better. i was really suprised by a few things that were hinted at in this book. thier was one referance to a hostel race other than the aliens themselves....would have thought by the time the movies take place in the would have probably ran across them some how. all in all a great book, recommend it.

Published by Thriftbooks.com User , 13 years ago
You take someone with a penchant for writing horror and put him to the task of writing a spine tingling, page turner for the Aliens franchise and you get this book 'Steel Egg', by John Shirley. Right away, in the forward, the author places this book in the Aliens timeline, as the very first encounter between man and the awesome, terrifying unnamed alien race. In the orbit of Saturn an alien ship is found, a large egg shaped vessel, the crew of the Hornblower are sent to investigate. They manage to get inside and encounter alien life for the first time, the Giffs, or rather the corpses of some violent event. In time, they discover the aliens nesting ground and sure enough, someone gets too close and zap, one of thoese face sucker things and yes, the inevitable happens, poor guys is choking down food and rip! out comes the alien. From there, we get pretty formulaic. There's the people just trying to survive vs. the arrogant scientist who wants to claim the aliens as his discovery, etc etc. I won't give more away, it is a fairly predictable read, but it's a fun, scary, violent romp with the aliens, or xenomorphs as they are referred to in this book. Suffice to say, that if you are a fan of the Aliens franchise, get this book.

Published by Thriftbooks.com User , 14 years ago
SHIRLY CAPTURES THE FEAR AND ATMOPHERE OF THE ORIGINAL ALIEN AND ALIENS< AND PUTS IT INTO A GREAT NOVEL. THE STORY IS SO WELL WOVEN I FEEL, at TIMEs THAT I AM there.

A nice addition to the Aliens realm.

Published by Thriftbooks.com User , 14 years ago
Being a big fan and critic of all things Aliens (the second movie was my favorite), I feel happy with this latest tale of Aliens putting humans and "advance" technology in their place. That being said, this wasn't a perfect fit into either of the seperate canons of the Aliens films or the comics/novels, but that's easy to overlook for the good entertainment value here. Well-written, the story flows smoothly and unfolds in a way consistent with the genre. I enjoyed the book and was happy to add it to my Aliens collection. That being said, there were a few things I noted as being a little, well, "off" for those who are as picky as me. The author acknowledges in his intro that he tries to add some new elements to the Aliens, such as detailing their eating and growth cycle a little more. Generally, making changes or additions is difficult to do without harming what originally made these "monsters" so scary, but Shirley does an admirable job of it. While these variations don't destroy what makes the creatures as great as they are, I kind of like some things not being so explained so that these terrifying killers actually remain "alien". The new things the author adds are often not portayed as definite, but could just be the perception of the characters, which is a great way to do such things. The politics and social messages of the time of the story seem to reflect the predictable trends we see now, which is as goos sci-fi should be, and I felt drawn into the reality created by the book. Attempts at "future slang" and characters speaking with "quaint" old slang terms don't seem to go over well, but it's not over-used so that doesn't matter much. My only real complaint is one that is common with prequels, the technology often seems better in the "past" than it does in the "future". Most notably, the control consoles on the humans' ship float around and are described as being pretty advanced. That kind of fanciness certainly wasn't on the Nostromo in the first Alien film. I think one of the things that made the first films so great was their gritty "real-ness" of the surroundings. This tale was less of a "truckers in space" and more of a fantastic sci-fi telling with "amazing" new alien technology. The only error I noticed is that the spelling of one of the Chinese characters names changed mid-page and stayed that way until their explosive death. Overall, though, a great read and welcome addition to the genre. I look forward to more Aliens books by John Shirley.
Copyright © 2020 Thriftbooks.com Terms of Use | Privacy Policy | Do Not Sell My Personal Information | Accessibility Statement
ThriftBooks® and the ThriftBooks® logo are registered trademarks of Thrift Books Global, LLC