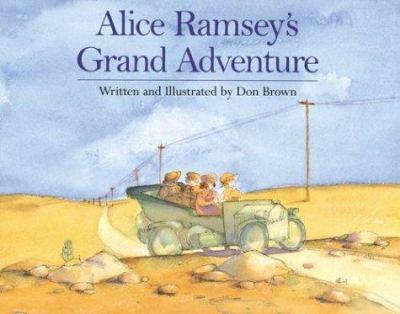 Don Brown introduces us to yet another little-known heroine. On June 9, 1909, twenty-two-year-old Alice Ramsey hitched up her skirts and climbed behind the wheel of a Maxwell touring car. Fifty-nine days later she rolled into San Francisco, becoming the first woman to drive across America. What happened in between is quite a tale! Through words and pictures, the author shares this story of a brave and tenacious young woman who followed her vision...

Here is a Road Trip where you can admire the women

Published by Thriftbooks.com User , 18 years ago
No doubt young readers will be struck by the idea that on June 9, 1909 a twenty-two-year-old woman named Alice Ramsey made a name for herself by becoming the first woman to drive across America in an automobile. After all, the thought that this achievement would be a big deal should strike this as being somewhat odd. But one of the things that "Alice Ramsey's Grand Adventure" does is remind its readers what life was like at the turn of the last century, especially if you happened to be a woman (after all, women could not yet vote in the United States).Told and illustrated with watercolor paintings by Don Brown, "Alice Ramsey's Grand Adventure" makes it clear why this fifty-nine day trip, which began on June 9, 1909, was something akin to something done by pioneers the century before. After all, Alice did this trip traveling with her friend and her sisters-in-law, and the only one who knew anything about automobiles was Alice. The car was a Maxwell touring car, which had a top speed of 42 miles per hour and where you had to light the headlamps with a match. To make things even more interesting there were no road signs, many roads were for horses rather than automobiles, and the only guidebook that existed for motorists only covered the eastern part of the country. What is fascinating here are the details, the problems both big and small, that Alice Ramsey faced while driving across the country in her Maxwell. After all, this trip took place less than a century ago, which makes "Alice Ramsey's Grand Adventure" a great example of those tales about the Olden Days when you can really tell how different things were way back then. If young readers were to think about what they could do today that would be in the same spirit, if not the same scale, as what Alice Ramsey did, it would be interesting to see what they might come up with to rival this road trip.

Published by Thriftbooks.com User , 19 years ago
"On June 9, 1909, Alice Ramsey drove out of New York City and into a grand adventure. Alice Ramsey wanted to be the first woman to drive across America. Alice's friend, Hermine, and her sisters-in-law, Nettie and Margaret, traveled with her..." So begins Don Brown's marvelous story of a little known young woman and her dream. Mr Brown's engaging and informative text, told in an easy to read conversational style, is filled with enlightening details about how the trip progressed over its 59 day period. Pigs clogged the road in Illinois, and railroad tracks slowed them down in Chicago and "...the car bounced over mile after mile of rail until the women were dizzy." Dirt roads became muddy and impassable when it rained, and as they traveled further west, there were no roads at all. "Alice followed telephone lines, hoping the wires would lead her to the next town. It wasn't always successful-sometimes it left them even more lost." And there were many mishaps and breakdowns along the way. But as she crested the Sierra Mountains, Alice knew she was now in California and close to her goal. "Alice guided the Maxwell onto a ferry that carried them to San Fransisco. When she rolled off the ferry behind the wheel of her Maxwell, Alice Ramsey became the first woman to have driven across America! It was August 7, 1909, Fifty-nine days had passed since Alice left New York City." Charming watercolor illustrations add just the right touch, and highlight the important events of the story. Perfect for youngsters 4-8, Alice Ramsey's Grand Adventure is an inspiring tale, told by a gifted storyteller, that is sure to whet the appetite of adventurous readers and send them out looking for more.

A wonderful inspiring book for adventurerers of all ages

Published by Thriftbooks.com User , 23 years ago
Luminous watercolors and a straightforward writing style serve to enchant the reader without over-romanticizing a true story. I look forward to more by this author.

Published by Thriftbooks.com User , 24 years ago
This is a darn good read...with pictures to boot. Unfortunately my eight year old now wants to drive cross country. Not have me drive her mind you, she wants to be the one doing the driving.
Trustpilot
Copyright © 2022 Thriftbooks.com Terms of Use | Privacy Policy | Do Not Sell My Personal Information | Accessibility Statement
ThriftBooks® and the ThriftBooks® logo are registered trademarks of Thrift Books Global, LLC