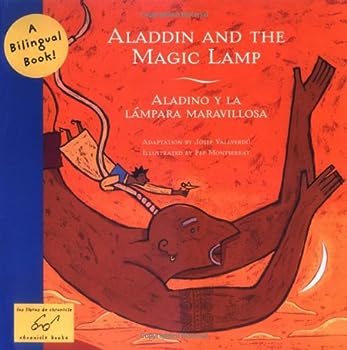 (Part of the Dominie Collection of Traditional Tales Series)

by Anonymous and Philip Pullman

Retold in both Spanish and English, the universally loved story Aladdin and the Magic Lamp will delight early readers and older learners alike. The striking illustrations give a new look to this classic tale and the bilingual text makes it perfect for both home and classroom libraries.

Published by Thriftbooks.com User , 12 years ago
The art in this book is very strong and imaginative. The images fit very well to what I have in mind when I think of this story and its settings. As a paperback it is very good value.

Nice story, but no special interest for Pullman lovers

Published by Thriftbooks.com User , 13 years ago
While I can certainly recommend this book for children (it is a great story, and the pictures are quite beautiful), it is of limited interest for the Philip Pullman junkie. The story is retold well, but you'd never know Pullman wrote it, as opposed to anyone else.

Published by Thriftbooks.com User , 15 years ago
If you're looking for a non-Disney version of this classic tale, this is a nice re-telling of the Aladdin story, with captivating illustrations for kids ages 6-10. The previous reviewer wrote that this version of the classic Aladdin tale was in error - that it mistakenly took place in China, not the Middle East as it should be. The truth is that this story has ALWAYS taken place in China, from the earliest existing versions of the story from the 16th century. Disney got it wrong, no surprise. Although these stories originated in the Middle East, they were often fantasies about far away and fabulous places, such as China. (It may also interest people to know that the earliest versions of many of these stories are in French, not Arabic, and many scholars believe that the versions which we know were created by Europeans out of bits and fragments of local Arabic and Persian sources, emphasizing the "oriental" exoticism which Europeans saw therein. In other words, there is no existing "authentic" Middle Eastern version.) For grown ups, I recommend the highly readable two volumes of Arabian Nights tales translated into English by Husain Haddawy. It's the definitive version, IMHO. Avoid Sir Richard Burton's translation like the plague. Enough said. For kids ages 7-11, I also strongly recommend Brian Alderson's colorfully illistrated retelling of the Arabian Nights (ISBN 0-688-14219-2). Another excellent illustrated version is The Arabian Nights retold by Neil Philip (ISBN 0-531-06868-4), which has fewer but funkier illustrations. Both story collections contain over a dozen tales, sutable for reading over many days, including the stories of Aladdin and Ali-Baba and the Forty Thieves. Alderson's version also has the Story of Sinbad, and is the children's version which comes closest to mirroring the full extent of the original tales. For slightly older kids (ages 9-14) I would recommend Geraldine McCaughrean's version of the One Thousand and One Arabian Nights (ISBN 0-19-274500), which has the best version of the stories-within-story framework. If Middle Eastern exoticism is your interest, another good picture book for kids ages 5-7 is Tomie DePaola's Legend of the Persian Carpet (ISBN 0-399-22415-7).

Excellent, but with a major flaw ....

Published by Thriftbooks.com User , 16 years ago
This book is excellently written and illustrated, but I was really surprised to read the first sentence, "Once upon a time in China ..." The story and illustrations indicate the settings in the Middle East and the currency used for all transactions in the story is the "dinar" !!!!
Copyright © 2020 Thriftbooks.com Terms of Use | Privacy Policy | Do Not Sell My Personal Information | Accessibility Statement
ThriftBooks® and the ThriftBooks® logo are registered trademarks of Thrift Books Global, LLC