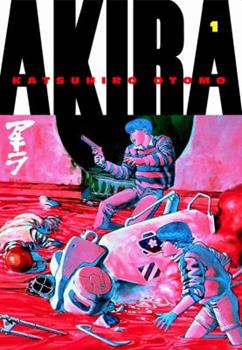 Welcome to Neo-Tokyo, built on the ashes of a Tokyo annihilated by a blast of unknown origin that triggered World War III. The lives of two streetwise teenage friends, Tetsuo and Kaneda, change forever when paranormal abilities begin to waken in Tetsuo, making him a target for a shadowy agency that will stop at nothing to prevent another catastrophe like the one that leveled Tokyo. At the core of the agency's motivation is a raw, all-consuming fear...

Published by Bee T , 10 months ago
Status: Delivered, never received. There is no book just losing $20+

Published by Thriftbooks.com User , 20 years ago
I originally started reading Akira in the Epic/Marvel books in color in the early 90's but I never read it all the way because they never reprinted the last volume. Now, after all these years, I can actually own these milestone books and finish reading them.No collection would be complete without them! The Akira manga is an influential work of fiction and one of the precursors of the Cyberpunk genre. Akira's influence (both manga and film) can still be felt throughout manga, comics and movies. One of the things I like the most about Akira is that the movie and the manga are not just versions of one another, but complementary works that enrich each other.In Akira #1 we meet the main characters but we only scratch the surface of the story and who is Akira. This 360 page book is filled with action and suspense. Neo Tokyo, 38 years after world-war III, is a city with complex problems, not the least of which is the numerous biker gangs. Meet Kaneda and Testuo. These two friends will soon be engulfed in a gigantic plot mixing politics, futuristic weaponry and a mysterious foce known only as Akira.Characters in Akira seem real beacuse of their flaws. Kaneda is brave but also a slacker. Kei is more level-headed but belongs to an extremist group.Despite its seemingly steep price, it's worth every penny.

There is a God... his name is Otomo

Published by Thriftbooks.com User , 20 years ago
Ever see the theatrical version of Akira? Like that? Good. But it doesn't really matter. I am, like most people who wrote these reviews, a big fan of the movie, because I saw it first. Of course, I didn't have access to the comic book epic version. First off, the book is quite a bit different than the movie. The same themes are expressed, but way more clearly than in the movie, due to the fact that Otomo could use more pages to explain it since he didn't have to compress his story into a 2 hour movie. The themes are also expressed at different times, in different ways. The action is completly different, and the book contains many characters not included in the movie. The most stand-out thing for me so far, had to be in the second book though. I don't want to give anything away, so let's just say that Akira himself plays a far more concrete role than he did in the movie. Anyway, the first 2 have been ridiculously awesome, you'll want to read them again and again. I'm sure the next 4 will be great too, and I can't wait until late july for the DVD release of the theatrical version. Note: if you want an easier time reading this, see the original dub of the movie first, it will give the characters in the book far more realistic personalities, and you'll be able to more closely identify with the story's protagonist- Kaneda.

...prepare to be blown away

Published by Thriftbooks.com User , 20 years ago
When I heard of Akira, people regarded as the finest Anime ever. I watched when I was 11 or 12, and it blew my mind. It was unlike any other animation I have ever watched before. Years past, and I have watched more anime. Akira didn't hold the same spot as it once did. With series like Evangelion and Cowboy bebop and movies like Ghost in the Shell and Princess Mononoke, who can blame me? Well, to celebrate the revival of Akira on the scren, Dark Horse brings the fame anime in a form most americans have never seen before...Manga! I knew there was a manga for it, but never had the chance to read it. Luckly, my friend (and fanboy in arms) ponied up the... bucks for volume one. You knowhow people say the book is better than the movie...it's so in this case. And, all things considered, it makes sense. A 2,000+ page manga cut down into 2 hours means a lot of things will be left out. It's a shame, but now comes a chance to redeem yourself...like myself. Pick this book and see what I mean. Oh, and one more thing: Tetsuo!!!!!!!

Fantastic manga. Worth every penny.

Published by Thriftbooks.com User , 20 years ago
I picked up volume 1 at a store yesterday, and I've already read it twice. This is a fantastic manga. The AKIRA series stretches over 2,000 pages and 6 volumes. It's won almost every Japanese Manga award imaginable, and with good reason. It's fast paced, intelligent, well-written, with great artwork, smart dialogue, and an interesting plot. Although the pricetag may seem a little steep, don't forget that each volume is over 350 pages long. If you think that's interesting, keep in mind that this first volume barely even scratches the surface of the story, it merely sets the stage for the cataclysmic events that will follow in the other volumes. You will like this manga if you like science fiction, action, comic books, manga, have seen and enjoyed the Akira anime movie, enjoy deep plots, or are looking for something new and different. You won't like it if you're sensitive to blood and violence, find the idea of black and white comics for adults ridiculous, and have no taste. Overall, this is a great manga, and no collection should be without it.

Published by Thriftbooks.com User , 20 years ago
Amazing? Yes, definitely. I got this book only a few short days ago, and I've read it three times and am already into the fourth reading. It's quick paced, proves that automotive chases can work in the comic medium. It's funny, intelligent, awestriking. If you've seen the anime and liked it at all, you owe it to yourself to see the entire (or the beginning at least) story. If you've seen the anime and didn't like it, pick the book up and give it a try. I'm sure you'll be amazed at it.
Copyright © 2020 Thriftbooks.com Terms of Use | Privacy Policy | Do Not Sell My Personal Information | Accessibility Statement
ThriftBooks® and the ThriftBooks® logo are registered trademarks of Thrift Books Global, LLC