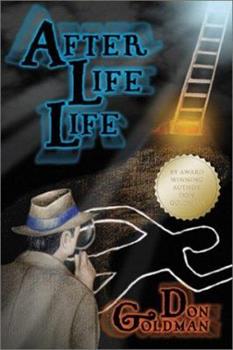 After Life Life is a finely crafted murder mystery that takes place during the five days following the sudden death of Andrew Law, chief justice of the Texas Supreme Court. On his last day on earth, Andy was diagnosed with a fatal disease. When he arrives in After Life Life, he discovers he did not die of natural causes. He was murdered. His wife, Melissa, also dies, and when she gets to After Life Life, she makes it to Class One. Andy, who is stuck...

Published by Thriftbooks.com User , 18 years ago
"After you die you go to After Life Life, and you get interviewed by people you knew in your life on earth. When your character has been thoroughly dissected, you go on to the next stage." - from the first chapter Author Don Goldman's "After Life Life" is not an easy book to categorize. It starts out in somewhat the same manner as the thought provoking Albert Brooks movie, "Defending Your Life." Like the movie, the book's main character wakes up in a strange place, only to eventually realize that he's dead but not in heaven. Instead, he's been transported to an otherworldly weigh station in which his entire life will be evaluated to determine if he's ready to ascend to the next level. The similarity ends there, for despite having some of the same lighthearted humor as the Brooks movie, Goldman's book weaves in elements of science fiction and suspense thriller, along with a good old-fashioned whodunit? murder mystery. Texas Supreme Court justice Andrew Law is the man who wakes up in the After Life Life to find himself being interviewed and oriented to his new surroundings by his wife's best friend, Carol. He soon discovers that a relatively minor judicial decision he made right before his death triggered a chain of events that eventually led to a world wide economic collapse and a nuclear war. As if that wasn't bad enough, he also learns that a seemingly innocuous lie he told his wife on their last night together ruined the rest of her life and is now preventing him from moving on to the next level. During interview process Andrew becomes convinced that he was murdered and that his death was somehow related to the fateful court ruling. When an attempt is made on his after life life, Andrew finds that he must convince the After Life Life authorities that his killer is on the loose in their world. Meanwhile, he must also contend with Carol's romantic feelings for him and his wife's unwillingness to forgive him for lying to her. "After Life Life" is an intriguing and challenging book that contains quite a few surprises. The characters are quirky and unique, particularly Andrew, who narrates the story. Goldman wisely stays away from the religious implications of the plot, save for a few obligatory phrases that leave questions about God blissfully unanswered. The logic of the After Life Life world that he's created is quite complex, but he manages to keep it consistent throughout. Though the murder mystery is central to the book's plot, the science fiction element, particularly the future history of Earth after Andrew's death, is vital to the story and is discussed at great length. Overall, "After Life Life" will be most readily enjoyed by those who with a taste for quirky and offbeat mystery stories. A Futures Magazine book review

Published by Thriftbooks.com User , 19 years ago
Andrew Laws is the Chief Texas Supreme Court Justice. When Andrew dies in bed of what he thought was a fatal disease, he finds himself arriving in the After Life. That's also when he discovers that his death was not to to a natural cause, but was in fact a murder. Complicating things is that Andy had told his wife a life just before his death and this falsehood has demoted him in the hereafter. To make matters even worse, his killer has been inadvertently admitted into "class two" status and the evaluators don't know who it was who killed him. Andy's post-mortem investigation of his own murder reveals a dark and devious plot to influence the vote of the Texas Supreme Court by the Governor -- a man who used his lethal manipulation to go on to become the President of the United States. After Life Life is a truly unique and original murder mystery that encompasses the Depression of 2009 and the nuclear holocaust of 2016. Don Goldman is an obviously gifted and original storyteller who has clearly mastered the art and craft of writing an engaging and witty mystery complete with a surprise ending that will leave the readers fully satisfied with their time spent reading of the After Life adventures of a Class One After Life Life evaluator!
Trustpilot
Copyright © 2022 Thriftbooks.com Terms of Use | Privacy Policy | Do Not Sell or Share My Personal Information | Accessibility Statement
ThriftBooks® and the ThriftBooks® logo are registered trademarks of Thrift Books Global, LLC