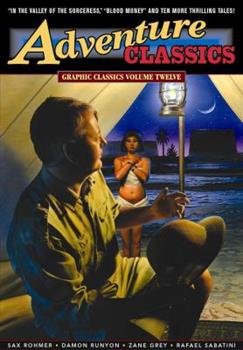 (Book #12 in the Graphic Classics Series)

The book presents thirteen stories and poems of danger, horror, comedy, and romance; all told in new comics adaptations. Included are "The Valley of the Sorceress" by "Fu Manchu" author Sax Rohmer, "The Masked Ball" by Alexandre Dumas, and "Tigre" by Zane Grey. Plus a classic war story by Damon Runyon, a saga of Captain Blood by Rafael Sabatini, and a noir crime tale by "Zorro" author Johnston McCulley. And stories from O. Henry, Rudyard Kipling,...

Published by Thriftbooks.com User , 16 years ago
The mysterious desert. The high plains. The stormy seas. The dense jungles. These are the places where actions speak louder than words, where the sharp retort of a six-gun decides who is right and who is dead, and a blind tiger stalks with preternatural senses and determination. These are the settings for Adventure Tales, a genre of literature prominent in the 1900's, in which many of the finest authors of the period plied their trades. In this, their 12th volume, Graphic Classics has assembled an anthology of some of the greatest adventure stories of the time, full of hot blood and cold nights, mystery and magic. These classic tales have been interpreted by a host of talented illustrators, lending their own unique insight into the authors original stories. This is their second anthology book, like Volume 10 "Horror Classics," combining many workers in the genre rather than focusing on a specific author. Some of the best authors are on display here. Robert Louis Stevenson, author of "Treasure Island," Sax Rohmer, creator of Yellow Peril villain Fu Manchu, Alexander Dumas, creator of The Three Musketeers, renowned cowboy author Zane Grey, Damon Runyon, author of "The Idylls of Miss Sarah" which was adapted as the musical "Guys and Dolls," Rafael Sabatinin master of Pirate Tales and creator of Captain Blood, Johnston McCully creator of the swashbuckling Zorro, Sherlock Holme's creator Sir Arthur Conan Doyle, and Rudyard Kipling, author of "The Jungle Books." Finally, there is O. Henry, whom if it weren't for Graphics Classics, I might have known nothing more of than the sweet Christmas fable, "The Gift of the Magi," rather than met him as a scribbler of dark cowboy adventures. This volume contains: The Wind Blew Shrill and Sharp - A lusty sea poem by Robert Louis Stevenson. Skot Olsen provides an excellent and strong sailor to accompany the compelling verse. In the Valley of the Sorceress - Egypt was a mysterious and magical place at the time, and Sax Rohmer weaves a web of desire and danger. An archaeologist attempts to open the hidden tomb of Sorceress Queen Hatasu, but finds his efforts daunted, and his soul beguiled by a beautiful Arab maiden. Illustrator JB Bonivert brings a unique and fanciful style to this classic adventure. The Masked Ball - By Alexander Dumas. A short and dark tale of heartbreak and desire, accompanied by a hedonistic masked ball where people seek to drown their loneliness and hide their faces. Michael Manning provides a dark atmosphere, heavy with black spaces, as an appropriate accompaniment. Tigre - The jungles of Mexico are the setting for this tale of lust and revenge. By Zane Grey, an old farmer is a master of wild animals, particularly his blind brutish tiger named Tigre. The only thing he can't tame is his young and pretty wife. Who stalks who in the dense jungle? A straight-forward but perfect comic book adaptation by Don Marquez, particularly of the lovely Senora. The Shooting

As exciting, wild, and spooky to read as its predecessors

Published by Thriftbooks.com User , 16 years ago
The twelfth volume in the "Adventure Classics" series of graphic novels and short story collections, the reader is treated to some of the finest adventure writing by some of the most talented authors, and adapted to the graphic novel format by illustrators and artists of matching caliber. The stories comprising this issue include: "In the Valley of the Sorceress" by Sax Rohmer, ill. by J. B. Bonivert; "The Masked Ball" by Alexandre Dumas, ill. by Michael Manning; "Two Men Named Collins" by Damon Runyon, ill. by Noel Tuazon; "Tigre" by Zane Grey, ill. by Don Marquez; "Blood Money" by Rafael Sabatini, ill. by Kevin Atkinson; "The Stolen Story" by Johnston McCulley, ill. by Chris Pelletiere; "Gunga Din", by Rudyard Kipling, ill. by Mary Fleener, and more. Thrilling tales of the past century brought to life in a wide variety of bold, black-and-white styles make Adventure Classics Volume 12 as exciting, wild, and spooky to read as its predecessors.
Trustpilot
Copyright © 2022 Thriftbooks.com Terms of Use | Privacy Policy | Do Not Sell My Personal Information | Accessibility Statement
ThriftBooks® and the ThriftBooks® logo are registered trademarks of Thrift Books Global, LLC