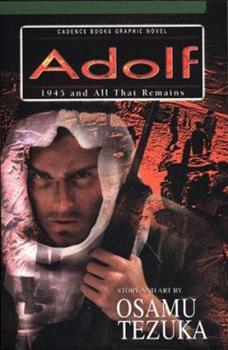 As children in Tokyo in the 1930s, the Jewish Adolf Kamil and the German-Japanese Adolf Kaufmann become friends. But their world is destroyed as Adolf Hitler sets in motion the greatest cataclysm of... This description may be from another edition of this product.

The final months of war in Japan

Published by Thriftbooks.com User , 17 years ago
In this book, Adolf Kaufmann, a half German half Japanese teen raised in Japan but educated in Germany returns to Japan. He has been gone for three years and has not been able to contact anyone in Japan for the past two years. He is overjoyed to be reunited with his childhood best-friend Adolf Kamil, a German Jew taking political refuge in Japan. The mood changes quickly, however, since in the past three years non-Jewish Adolf has come to follow the Nazi party beliefs including understanding Mein Kampf. Non-Jewish Adolf's mission in Germany is to find the documents that show that Hitler has Jewish ancestry. (By now everyone but Adolf realizes that the documents don't mean much and that the war is nearly over.) Adolf has also been assigned to kill a certain Japanese man, who has been hiding the documents. Adolf is shocked to find that his mother has remarried, and to the very man he has been ordered to kill. So that pretty much does it for Adolf's relationships with friends and family back in Japan. This book follows the Adolfs and Toge, the narrator, through the last few months of WWII and then through their lives after the war, particularly what happens to the two Adolfs. So many minor subplots from other books are resolved here, but won't be distracting if you haven't read other books in the series. This book stands alone well, and will also add more to the story if you have read the other books. This is a really great amazing series. I recommend it. These are violent books and this one in particular, with a rape, mass executions and plenty of blood gore and violence. So be aware of that and don't give it to a small child to teach them history.

A fitting end to a brilliant series

Published by Thriftbooks.com User , 17 years ago
Osamu Tezuka's, "Adolf: 1945 and All that Remains," is the end volume to the epic and sweeping 5 volume 'Adolf' series. While the quality of the series has been excellent throughout, Vol. 5 is truly the hallmark of the series with excellent writing, artwork and the satisfying closure to every single one of the myraid subplots weaved throughout the series.If you haven't read this series yet do yourself a favor by starting from the beginning and working your way through each of the 4 volumes till you reach this book. Trust me, the journey will be worth it!

The Final Installment of "Adolf" May Be The Best

Published by Thriftbooks.com User , 23 years ago
Mere words cannot describe this tragic tale of three men named "Adolf".The late Osamu Tezuka is brilliant. The artwork is phenomenal. The manga style and the expressions of the characters is unique.The series is about how World War II effected EVERYONE- from the leaders to ordinary citizens who just want to live. The five books tackle racism, hatred, nationalism, love, family, and duty.This last book of the series is a culmination of a great work with pop culture historical significance. This series is similiar to Art Spiegelman's MAUS, but with a different twist. First of all, the art is manga-style (which I personally like better). Also, there are more characters in ADOLF. ADOLF is a tale from the Japanese perspective, while MAUS is a "survivor's tale". But I degress, it was not my intention to compare the two works. If you liked MAUS, you will like ADOLF.The final installment is very emotional. A fitting end to such a thought provoking and heart-renching series.

A MUST read... a significant piece of cultural work

Published by Thriftbooks.com User , 23 years ago
This volume represents the culmination in Tezuka's 5 volume opus. A work which makes connections between the shoah and the bombing of Hiroshima, between racisms of all kinds, it is a breathtaking, tragic, and challenging piece of artistry -- perhaps the best pop culture work on the linked issues of the Holocaust and World War 2.
Trustpilot
Copyright © 2022 Thriftbooks.com Terms of Use | Privacy Policy | Do Not Sell My Personal Information | Accessibility Statement
ThriftBooks® and the ThriftBooks® logo are registered trademarks of Thrift Books Global, LLC