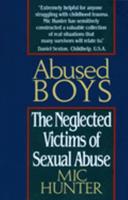 A long overdue book by a psychologist who has extensive clinical experience treating male victims of child sexual abuse, it explodes the myth that sexual abuse of male children is rare, or that the consequences are less serious than for girls. Hunter examines the physical and emotional impact of abuse on its victims and the factors affecting revovery. With personal case histories of victims and their families, this is a powerfully written and meticulously...

This book covers all the bases

Published by Thriftbooks.com User , 21 years ago
I am a sex offender, a convicted felon for sexually assaulting my son, who purchased this book as part of my painful, earnest search for a full understanding of what I did to this little boy. I've purchased and read a slew of other books, many of which were helpful in giving one grief-filling insight of harm or another, but - hands down - this book by Hunter wraps it all up better than any I've seen. Not only does he cover a wide range of ways men and women abusers set up, groom and intimidate their child victims, but he chronicles all the ways the child victim is psychologically damaged for life, and gives you the clinical terms for the various types of disorders; he makes it clear how counseling/therapy CAN help, but also that there will still be scars for life. He has written this book not only for the since-grown-up victims to read and understand objectively what they have suffered and are still suffering, but also for the spouses/partners/lovers of those grown-up boy victims; he "speaks" directly to both those victims and their partners with end-of-chapter questions as well as mid-chapter scenarios that is sure to be very, very helpful. For me, as an anguished, grief stricken father-offender, this book really brought it all "home" to me as what .... I had wrought, and upon finishing reading, makes all my previous empathizing - which I thought was "100%" - look more like minimizing my crime. Although I was not sexually abused in any of the classic ways as a child, the extensive discussion of the ways parents can sexually abuse without touching (consciously or sub-consciously) made me realize for the first time in my quest and treatment process that why, yes, I HAD been abused and crippled in ways that I had not understood before reading Hunter' book. I would highly recommend this to any adult who cares deeply about any specific person who has been - or may have been - sexually abused. This is a book which will be heavily loaned among needy friends, I am certain!

One of the most emotionally draining books I've ever read

Published by Thriftbooks.com User , 21 years ago
I worked for the Denver District Attorney's Office as part of the Intake Unit. In the five years I was there, Denver filed an average of roughly 5,500 felony cases per year; I reviewed the vast majority of those cases - everything from murder to sexual assault.After I had been with the office for several years, I read a case involving a young boy who had been sexually assaulted by his twenty year-old uncle. As I reviewed the file, it dawned on me that I had seen very few male-on-male sexual assaults. And of that very small amount, most of the cases were prison rape. During my five year tenure, I remember seeing less than five cases of sexual assaults on boys (either by males or females). That struck me as odd. Denver saw its share of sexual assaults on children, to the tune of several per week during the summer months [parents: do yourselves and your kids a favor - stay away from water parks; they're hunting grounds], yet 99.9% of the victims were girls. Granted the number of assaults I saw only represented REPORTED assaults, I knew, logically, that the number of male victims had to be significantly higher than what I was seeing. I made a mental note to look into this topic. That's how I came across this book. I was never a victim of sexual assault, so I thought this book might be a good, academic, supplemental read. I could not have been more wrong. To read this book is to go through a gut wrenching experience - even for somebody who has been privy to the unedited ugly side of human nature as I have. I honestly believe most men, straight or gay, have no concept of what it would be like to be repeatedly forced to have sex with another man. This book explains why male sexual victims rarely come forward: the sense of shame, humiliation, and fear combine with the societal taboos of incest, child molestation and homosexuality. It is a powerful book. Dan Lobnitz - University of Denver College of Law (2L)

Abused Boys is about the resilency of the human spirit

Published by Thriftbooks.com User , 22 years ago
I picked up this book out of curiosity several years ago and couldn't put it down. Parts of it I've reread several times. It has had a powerful impact on me, not because I fit the subject of the book (I wasn't sexually abused, nor a boy), but because of Hunter's sensitive discussion of the emotional and spiritual dimension of life experiences, and resulting coping mechanisms that are developed. I think of this book as a powerful book about spiritual healing, but as I glance through it I realize it is about hard core sexual abuse of boys, profoundly disturbed people who describe gut-wrenching traumatic experiences. Hunter doesn't pathologize their feelings or reduce them to clinical variables. Instead he illustrates by example how spiritual healing can be facilitated within a 12-step framework. I've read and/or skimmed many books about female abuse victims, and none of them has resonated much with me, whereas Hunter's book grabbed me forcefully from the start. Maybe it's because Hunter writes about "hidden" abuse victims, amid pervasive denial that abuse occurred. When I read most books about abuse, I have an image of somebody saying, "oh, the poor dears, isn't it terrible what happened to them." When I read Hunter's book, I have an image of somebody saying, "my god, why doesn't somebody notice".The best spiritual authors I know rarely discuss spirituality directly; instead they discuss life events in a way that draws out their spiritual dimension. This is the type of author Mic Hunter is. He emphasizes that the effects of trauma extend beyond obvious symptoms such as having nightmares afterwards, or becoming afraid of the dark. More profoundly, trauma affects one's spiritual core, one's concept of who one is. Abused Boys is about the human spirit: its vulnerability, defensive strategies it employs to protect itself, and its tremendous capacity for healing.

The more you need this book, the tougher it is to read.

Published by Thriftbooks.com User , 23 years ago
It was very unsettling to read a book with this title and discover I was reading about myself. At the same time, it was quite a relief to hear someone break the silence. The case histories are tragic, yet we need to hear about them so we can learn how to protect our own children. I also recommend Judith Herman's "Trauma and Recovery." Warning: Don't read either of these books if you are a "survivor" of child sexual abuse, unless you are feeling VERY stable.
Copyright © 2020 Thriftbooks.com Terms of Use | Privacy Policy | Do Not Sell My Personal Information | Accessibility Statement
ThriftBooks® and the ThriftBooks® logo are registered trademarks of Thrift Books Global, LLC