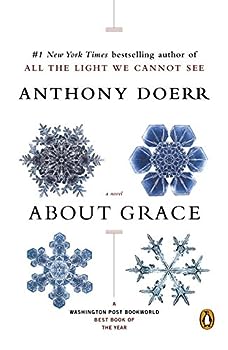 About Grace: A Novel

This description may be from another edition of this product. The first novel by the author of the acclaimed Pulitzer Prize-winning #1 New York Times bestseller All the Light We Cannot See , one of the most beautiful, wise, and compelling debuts of recent times....

Published by Thriftbooks.com User , 13 years ago
I think this is a book of rare excellence. This book is for people who are pensive and thoughtful (is that redundant?). Its a wonderful trip into the detailed moods, hopes and fears of its main protagonist. The style of Doerr is neither regular nor standardized, but it takes on a quality of aimlessly floating along a stream. But to my mind, this does *not make the story boring or uninteresting, but seems to do the opposite. The story does not need fast-paced hollywood action, as its the emotions and thoughts of the characters which fascinate. Doerr is almost more of a poet than a novelist, as he captures all the nuances of each character reaction. Go read it!

Published by Thriftbooks.com User , 14 years ago
I just finished this novel on a trip back from Phoenix, and I have to say not only the style and description, but the plot itself grabbed me. Unlike other reviews here, I found nothing plodding about the story. I found it riveting, and full of surprises. I'm a big fan of Japanese author Haruki Murakami, and I found a numbeer of similarities in both the beauty of the language, as well thematic and plot. There are elements of a surreal sort of journey and a search for a missing life that spans across thousands of miles. Doerr does a great job of shifting his tale between several key time periods in the life of David Winkler, the main character of the story. This is a brilliant novel, and I plan to share it with friends.

Published by Thriftbooks.com User , 16 years ago
If you've stood in a snowy meadow on a star-filled night and marveled at its stillness and beauty, or ever sensed a deep connection to the wind as it hit your face, then you will appreciate this book. It is filled with life. It is filled with thousands of moments we all experience, but rarely stop to appreciate. About Grace is a beautiful book about a very ordinary man, David Winkler. It is in his humanity that I was able to identify and relate. One aspect of his life that is extraordinary, are the vivid dreams that come to haunt him in his waking hours. It is in the struggle to deal with these premonitions that we see the frailty of life, the strength of human will, and the power of love. Anthony Doerr's book may stop you mid-sentence to marvel at what is being said. More likely it will stop you mid-sentence to marvel at how it is being said. It is written with clarity and soulfulness by a man that obviously walks through life with his eyes wide open. Savor it like a fine wine. It will remind you to wake up to the wonder and beauty in the details of your everyday life.

A beautifully written novel about a father's love

Published by Thriftbooks.com User , 17 years ago
David Winkler is a 32-year-old hydrologist leading a fairly boring life in Anchorage, Alaska. Since childhood, he has experienced dreams that occasionally turn out to be actual premonitions. The most vivid one involves a man cut in half by a bus. Despite his mother's best attempts to avoid any incidents (she keeps him home for several days after he confides the dream), it comes to pass that, after shopping for groceries on a Saturday, he witnesses a man --- carrying the same hatbox as in his dream --- keeping his inevitable date with the bus of destiny. In the dream that most affects his adult life, he watches a woman drop a magazine in a store and he picks it up for her. Eventually, he picks up the magazine for one Sandy Sheeler --- a woman he knows he will fall in love with, a woman he semi-stalks for several months, whose magazine he keeps and reads until the pages are tattered, a woman who is married. Their affair begins with afternoon movie matinees and stretches into Wednesday evenings spent in his apartment as her husband has hockey on those nights. Before long, she becomes pregnant and, since her husband has been deemed infertile, it is obviously David's. They run away together and end up in Cleveland where David has found a job with a TV station as the staff meteorologist and Sandy fulfills an artist's dream by constructing large, elaborate metal sculptures in the basement of their little tract house by a feeder creek of the Chagrin River. David's baby daughter, Grace, is born, and as babies tend to do, she changes his life in completely unexpected ways. His happiness and contentedness are palpable as he counts the minutes at work until he can go home to watch his little girl sleep and watch his wife (because, despite not being divorced from her husband, they have married) toiling over her art. All is well. Then he has a dream. He dreams of a long, rainy spell in Ohio, one that swells rivers to flood stage and even causes creeks to rise. He dreams of his house, deserted and filling with water, seemingly empty as he runs room to room, yet he knows this cannot be because he can hear a baby crying. He finds Grace and stumbles outside with her only to be met by a wall of water that sweeps them both away. He awakes. He cannot shake the dream and it stirs his old sleepwalking habit. It gets so bad that his wife will shake him awake in the driveway, sitting in the car with the baby on the seat, having just returned from driving to where or from neither of them have any idea. In addition to panicking about whether his dream will come true, he now panics about what he himself might do to his daughter in his sleep. Ultimately, the dream comes true. It rains and rains. It floods. He spirits his family off to a motel. But after leaving them there and being sent away by Sandy out of fear of his sleepwalking, he returns to the house after attempting to call the motel and getting no answer. His street, neighborhood and home look exactly like the s

Published by Thriftbooks.com User , 17 years ago
After Anthony Doerr's stunning short story debut with "The Shell Collector" (Scribner), the gifted young author has made a beautifully seamless transition to novelist with his exquisite new book, "About Grace" (Scribner). Mr. Doerr again intriguingly integrates the natural world and the human spirit with his signature beautifully poetic prose. Fiction and scientific fact are elegantly combined to raise our awareness of the wonder in much of our everyday lives that is too often unobserved. His use of story is especially compelling, pulling the reader along, completely captive. We will surely hear a lot more from this talented young writer in future years. Meanwhile, his most recent gift, "About Grace," is exceptional. Hal Eastman, Director, Easlas Trust
Copyright © 2020 Thriftbooks.com Terms of Use | Privacy Policy | Do Not Sell My Personal Information | Accessibility Statement
ThriftBooks® and the ThriftBooks® logo are registered trademarks of Thrift Books Global, LLC