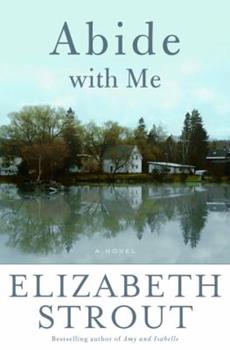 In her luminous and long-awaited new novel, bestselling author Elizabeth Strout welcomes readers back to the archetypal, lovely landscape of northern New England, where the events of her first novel, Amy and Isabelle, unfolded. In the late 1950s, in the small town of West Annett, Maine, a minister struggles to regain his calling, his family, and his happiness in the wake of profound loss. At the same time, the community he has served so charismatically...

Published by tinabeth , 3 years ago
I love anything Strout writes!!!

Published by Thriftbooks.com User , 16 years ago
Describing a whole world in a few words, as someone said, and such a resonating world - this is what great literature is made of. I couldn't put this book down. This is a writer with a sure grasp of the relationships between men and women, our foolish and guileless hopes and disappointments, how the landscape of our lives is reflected by everything around us. Every word in this book is true, even though it is fiction. The ending of the book doesn't disappoint, either. Truly a marvelous work that will live in my mind for quite awhile. I think it deserves 6 stars.

Published by Thriftbooks.com User , 16 years ago
Just as when I read Amy and Isabelle, I was struck here by how Strout turns "quiet" on its head in Abide with Me. In the sense that this book takes place in a tiny and hard New England village, in the sense that it concerns a minister and his daughter treading at first ever so lightly in this village, it *is* quiet. And the landscape of Amy and Isabelle was "quiet" in the same sense: a mother and daughter living in one house, at first barely making any impressions at all. But what is distinctly not quiet here is what is going on inside the heads of these characters. And that is what Strout does so well: reveal the inner complexities of just about anyone, including those who at first you'd never believe could be interiorly complex. I think she does this best with Katherine, the minister's kindergartner, who is practically mute but who has a rich, thoughtful, even witty interior life. But many, if not most, of the characters in this novel, at first seeming to conform to the stereotype of hard, rough, private New Englanders, are revealed as having tremendous private pain, passion, and sensitivity. Meanwhile, the central figure in Abide with Me, the minister, starts out with a rich exterior in the form of his philosophical sermonizing, but hardly any interior at all. This is his lesson to learn, and Strout shows us exactly how he comes to gain self-awareness. Bravo to Strout for her characterizations. This is a beautiful book.

Published by Thriftbooks.com User , 16 years ago
Elizabeth Strout won me with her debut novel, Amy and Isabelle. I found it to be both affecting and compelling, written by one who felt a deep affection for the characters she created and also possessed a sympathetic understanding of the human condition. The same might be said of Abide With Me set in West Annett, Maine. The year is 1959 and this small New England town is like many others. It is a place where some secrets are kept and others are whispered. A pillar of the community is Tyler Caskey, a minister with a loyal following, who strives to serve his congregants well. When is wife dies quite suddenly Tyler is left with two young girls, Jeannie, the baby of the family goes to live with her grandmother and Katharine who at the age of five shows various signs of an emotional disturbance stays in West Annett with her father. Tyler has his hands full, trying to remain steadfast despite his heartrending loss and care for Katharine. When her teacher makes an appointment with him to discuss the child's problems she misreads Tyler, finding him to be imperious rather than concerned. She spreads her opinion of him throughout the town. There is but one friend for Tyler and that is Connie his housekeeper. She is someone in whom he can confide. When he attempts to bring Jeannie home to be cared for by Connie, his mother strenuously objects. In addition, Tyler's very world seems to be crumbling about him as his beliefs are shaken. One again Elizabeth Strout has crafted a story of timeless appeal with life, God, honor, and respect as the foundation for her narrative. Actress Gerrianne Raphael is a versatile performer with theatre credits ranging from Man of a Mancha to Li'l Abner to Candide with the Philadelphia Opera. Her reading brings tears to the eyes and joy to the heart as listeners are carried to a more than satisfying denouement. - Gail Cooke

Published by Thriftbooks.com User , 16 years ago
Five Stars!! Spinning off of the theme of life in small town northern New England, Elizabeth Strout conjures up another winner of a novel detailing the inner most feellngs of the human condition and inter-personal relationships, buffeted by duty, change, and tragedy. Much like the preceding novel, "Amy and Isabelle", set in a different fictional New England town, this is MESMERIZING writing. We already know from the editorial reviews that this novel is heading towards some sort of a surprise near the end, but in getting there Ms Strout's prose makes us want this journey to continue much longer! Considering the prosaic subject matter, the life of small town preacher Tyler Caskey, and his family, friends, parishioners, and gossipy townsfolk, she conjures up one heck of a fictional ride. Tyler, whose center of gravity balances between God's word and layman philosophers. Ms Strout effectively draws us in and keeps us beguiled with her rich cast of characters, her 'attention to detail' (Connie's hair, for instance; the minister's old shirt; or the effects of fall weather) and her elegant, stark prose, peppered with down-home phrases like "skitter-skatter". By the time Connie Hatch steps into the forefront, this novel is riveting in it's intensity and beauty. The church congregation scene is flat out wonderful writing, as are the final scenes between Tyler and George. I guessed at a different ending, but Ms Strout is firmly in control and takes us where her compass wants us to be and it's a wonderful ending. This is a great fictional study in small town complexities and humanity. And she leaves us wanting more! Highly Recommended. Five Wonderful Stars!! (Note: I found the Fournier typeface to be very elegant and readable. This review is based on an unabridged digital download, which makes digital disc a great new home storage alternative for novels. Thank you, Random House!)
Trustpilot
Copyright © 2022 Thriftbooks.com Terms of Use | Privacy Policy | Do Not Sell My Personal Information | Cookie Preferences | Accessibility Statement
ThriftBooks® and the ThriftBooks® logo are registered trademarks of Thrift Books Global, LLC