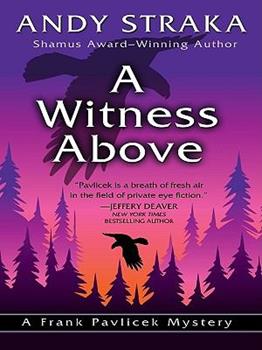 While hunting with his red-tailed hawk, Charlottesville P.I. Frank Pavlicek finds the body of a teenage boy in an area Frank and his teenage daughter, Nicole, recently visited. But what Frank finds in the boy's wallet disturbs him: Nicole's phone number, which links her to the crime. When Nicole lands in jail a few days later, Frank's past comes back to haunt him.

Published by Thriftbooks.com User , 18 years ago
Frank Pavlicek is now a Private Investigator in Charlottesville, Virginia. Thirteen years ago he left the NYPD under suspicion of shooting an unarmed black teenager. He and his then partner, Jake Toronto, saw a gun in the teenager's hand, but none was ever found. Jake now lives in nearby Leonardtown. Both Jake and Frank are now into falconry.Frank is out hunting with Armistead, his red-tailed hawk, when they discover the body of a teenage boy in the brush. Dewayne Turner turns out to have ties to Frank's teenage daughter, Nicole, over in Leonardtown. She lives with her mother. Frank tries to contact Nicole but is put off until Nicole calls one night letting him know she is in the Leonardtown jail. She was arrested after the Sheriff received an anonymous tip that they would find drugs in Nicole's car. She took off and they ended up in a chase before they caught her. Made it even worse for her. Then they tied her and her father into Dewayne's death. Now Frank needs to find out who really killed Dewayne and whether Nicole is into drugs. His ex-wife Camille isn't much help. Nor is her current boyfriend Kevin Weems. Commonwealth's attorney Priscilla Thomasen appears to help Frank try to find the truth, but he always knows that she is the one bringing charges against Nicole. He worries what they might find.New evidence is uncovered in the long ago shooting involving Jake and Frank. The now retired police officer they had gone to assist in New Rochelle thirteen years ago, Officer Cahill "Cat", has also moved back to Leonardtown. He and his wife have a restaurant. Frank needs to find the killer before more people are killed and his daughter is convicted.This is the first in a new series. I enjoyed this book and I definitely like Frank and Jake. They are complex but very likeable characters. I especially like the Virginia setting as I that's where I live so I recognize many settings in the book.Falconry is new to me, but I enjoyed getting to know more about it through this book. I will begin reading the second in this series tonight. Can't wait.I highly recommend this book.

Published by Thriftbooks.com User , 18 years ago
Frank Pavlicek left the NYPD under bad circumstances and set up a PI office in Virginia. He is out falconing one morning when he stumbles, almost literally, on a decomposing body. While looking around before he calls the police, he finds his daughter's phone number in the guy's wallet. But soon, his daughter has been arrested for drug possession, a charge she denies adamantly. With a local sheriff as suspicious of Frank as Frank is of him and a daughter not telling the entire truth, Frank is going to have to work fast to free her and learn the truth.While I don't normally read PI novels, this one caught my interested because of the falconry aspect. I have no connection to the subject, but I'm always up for learning about something new in books. This story provided some interesting information about the subject without slowing down the story.And what a great read it was. The characters are all well drawn and easy to care for, and the plot is confusing as well. I had no clue where the story was going until the end.I will definitely be reading other books in this series. I have to know what happens next to Frank and his friends and family.

Met the Author and Read the BOOK - EXCELLENT WRITING STYLE

Published by Thriftbooks.com User , 20 years ago
I met Andy at a bookstore in Columbus GA.. Had him sign the book and read it in one sitting. I review for a number of magazines monthly.. This book.. is without a doubt a winner on all accounts. cannot wait till his next in this series.. He is going to be a hit in this genre

Published by Thriftbooks.com User , 20 years ago
As the author of a recently published debut mystery, I celebrate Andy Straka's remarkable debut. A WITNESS ABOVE marks the introduction of Frank Pavlicek. He is a Virginia private eye with a failed marriage who left the NYPD under questionable circumstances. He is attempting to build a new life as a private cop. His passion is falconry, and his hunting bird discovers a dead body. Evidence indicates a connection between the victim and Frank's teenaged daughter. The swiftly paced plot never slows from there, and Mr. Staka as written a terrific book. It is a great debut novel. I welcome him at the dawn of what will become a great career.

Published by Thriftbooks.com User , 20 years ago
His life as a New York cop ended in the mean streets of New Rochelle thirteen years ago when he and his partner Jake Toronto killed an A-student teen they thought carried a weapon. Frank Pavlicek left the city under a cloud to open a private investigative practice in Charlottesville, Virginia with his prime pleasure being falconry accompanied by his bird of prey Armistead.While hunting together, Armistead locates the murdered body of a teen. The ex-police officer finds the victim's identity stating he is DeWayne Turner of Leonardston, Virginia, home of Frank's ex-wife and their daughter Nicole. He also sees and takes a bill that has written on it Nicole's private number even though Frank knows that he illegally tampered with the evidence. However, in spite of trying to protect his beloved daughter, the police arrest her, increasing the pressure on Frank to solve the murder of a teen known for dealing, but connected with his cherished NicoleA WITNESS ABOVE is an exciting investigative tale that provides readers with an entertaining story line accompanied by an intriguing look at falconry. The plot never slows down, as Frank needs to prove the innocence of Nicole. Frank is a strong character and the support cast helps readers understand his motives. Flashbacks to New Rochelle and the subsequent trial augment the plot by enabling the audience to actually see what occurred that led to Frank's "disgrace." Andy Straka has introduced a winning new sleuth whose love of falconry adds uniqueness rarely seen in ex-cop turn private investigator novels.Harriet Klausner
Copyright © 2020 Thriftbooks.com Terms of Use | Privacy Policy | Do Not Sell My Personal Information | Accessibility Statement
ThriftBooks® and the ThriftBooks® logo are registered trademarks of Thrift Books Global, LLC