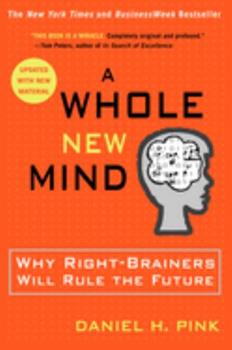 A Whole New Mind: Why Right-Brainers Will Rule the Future

Look out for Daniel Pink's new book, When: The Scientific Secrets of Perfect Timing The future belongs to a different kind of person with a different kind of mind: artists, inventors, storytellers-creative and holistic "right-brain" thinkers whose abilities mark the fault line between who gets ahead and who doesn't. Drawing on research from around the world, Pink (author of To Sell Is Human: The Surprising Truth About Motivating Others ) outlines...

Published by Thriftbooks.com User , 14 years ago
I discovered Daniel Pink's "A Whole New Mind" while I was in search for a better way to make power point presentations. Power Point sent me to the Zen of design, which sent me to the negative space of graphics, which sent me to the psychology of learning, where I landed upon Pink's great book. The journey was reflective of Pink's belief that just over the horizon, Right Brain ("R Directed thinking" in his lexicon), resplendent in its ability to recognize patterns in disparate actions, will be the key to success and competitive advantage. After reading his book, you'll agree that the future belongs to those of us who can craft symphonies from unrelated categories (as opposed to those who just analyze alone), who have narrative aptitude for story (instead of who just read power point slides), and who have empathy to solidify relationships (as opposed to transactional engagements) we will be the masters of the his Conceptual Age. Pink layers on aspects of globalization in advancing his argument pointing out that with ever flatter competitive markets, cost reductions and scale-welled educated workforces in Asia the old narrow advantage of rote fact based work will fall to the greater functionality of working jazz, blending and connecting high Concepts, relational advantages driven by right brain thinking. Not withstanding some of the New Age qualities such as "laughter class", and the buttressing the argument with globalization theory, Pink is spot on regarding the increasing economic value of pattern and strategy recognition. At root his book is as much about approaches to business and competition as it is about psychology and the development of man's working culture. My epiphany in discovering the book is precisely how he outlined his theory of "High Concept" and its advantages. The pattern I detected in my journey was all about personal effectiveness. In riffing from design theory to graphics, then to learning theory, my "R Directed thinking" was cobbling together my own pattern recognition of personal effectiveness and the ability to lead an audience and establish "thought leadership." The easily read and well crafted book grabbed my attention from the onset. Along the way I found new language to describe how I already do things and approach problems. In building out a global business key elements of my success have been on the L Directed ability to execute, a focus on making things happen, but also within an overall big picture, R Directed aspects on the "Symphony" which Pink asserts the "Conceptual Age" will require. Too often, the business press narrows on "focus" to develop "expertise" but the real high value functions is not about how well you know one market or a technology, but how well you assimilate the pieces into the bigger picture. The special talent in the ability to interpret things simultaneously, in seeing all the elements of a situation and understanding what they mean is really the Holy Grail in global business. In shor

Published by Thriftbooks.com User , 14 years ago
I can't imagine, especially if you are at mid-life, that you feel your job is really secure. You may even have a game plan for what to do should the pink slip find you. Well, if your plan included dusting off the ol' resume and going on the internet, it's time to rework the playbook. Dan Pink's book makes a compelling, albeit indirect, case for changing one's career management strategy from merely marketing transferable skills to offering a compelling and unique promise of value. The premise of this book is that the Information Age, which was based on the Left Brain qualities of logic, sequence, and analysis, is giving way to a new Conceptual Age dominated by the simultaneous, contextual, big-picture capabilities of the right brain. In this new Conceptual Age, careers that rely most heavily on left brain capabilities are at risk of being automated, off-shored, or may simply produce outcomes that fall short of increased demand for products and services with an aesthetic and emotional appeal. According to Pink, the key to delivering value in the Conceptual Age is to engage in work that involves high concept or high touch abilities. High concept includes creating artistic or emotional beauty or appeal, detecting patterns or opportunities, and producing a novel synthesis of seemingly unrelated ideas. High concept includes ability to empathize and grasp subtleties human interaction, find joy in oneself and others, and pursue purpose and meaning. High concept and high touch are right-brain directed capabilities that rely on six senses: design, story, symphony, empathy, play, and meaning. Although Pink's book is not a career management book, the six senses seem to align well with career management using a personal branding approach; specifically: - Design: going beyond the utility of your skill set to its significance and emotional appeal; - Symphony: considering how your combined competencies and attributes contribute to your unique promise of value; - Story: crafting messages to clearly communicate what you offer; - Empathy: building a network of mutual benefit with others; - Joy: identifying work you love where you can be yourself; - Meaning: making a difference in the lives of the people you serve. Of course, integrating these capabilities into managing you career is just the beginning. Increasingly, I believe, these capabilities will be the drivers for innovation and stand-out accomplishment in whatever position you have. And stand-out accomplishment demonstrates the unique and compelling value you deliver -- which, in turn, moves your career forward. I highly recommend this book for the perspective it can provide on proactively managing your career.

Why right brain people MAY be in demand in the future

Published by Thriftbooks.com User , 15 years ago
I enjoyed reading this book and learned much from it. The author gives a lot of examples and references to his points. He believes that the right-brained people (creatives) will ascend in importance and left-brained people (accountants, programmers, MBA's) will descend because their information processing skills will be offshored or computerized. I don't think it will be the big shift that he claims but I do believe that he is making an important series of observations and predictions. I don't think we'll make a large shift because the left-brain functions are required to generate much of our GDP and that currency and wage fluctuations will equalize how much we do and how much is offshored. I highly recommend this book. It is a fast and easy read. Please visit the web sites that he lists in his exercises at the end of most chapters. I found them quite delightful. John Dunbar Sugar Land, TX

Published by Thriftbooks.com User , 16 years ago
A Whole New Mind by Daniel Pink is an extraordinary book. Finally we are admitting that intelligence, performance, and yes--even success--can be achieved by those who appear to be more creative than academic. Pink goes to great lengths to explain his position relative to the kind of successful worker Americans must become in order to avoid being unemployed. Even better, Pink includes sections called Portfolios where the reader is given suggestions for ways to strengthen his/her "whole new mind."

Affluence, automation, and globalization: who ya gonna call?

Published by Thriftbooks.com User , 16 years ago
As Dr. Peter Venkman -- Bill Murray's alter ego -- says in Ghost Busters II "Kitten, I think what I'm saying is that sometimes sh*t happens, someone has to deal with it, and who ya gonna call?" Dan Pink, that's who. Instead of ectoplasmic entities, we are challenged by picky, affluent consumers; automation technology; and globalization. "In this new era, each of us must look carefully at what we do and ask ourselves: 1. Can someone overseas do it cheaper? 2. Can a computer do it faster? 3. Am I offering something that satisfies the nonmaterial, transcendent desires of an abundant age?" Dan's call to action has two parts: the first synthesizes the challenges into a cohesive status quo, and the second offers some solutions (start exercising all your cognitive skills, left brain logic *and* right brain romanticism). Keep your high-tech skills, of course, but grow your right brain "high-concept, high-touch" skills (design, story, symphony, empathy, play, and meaning) to create a whole new mind. A book to read (in a single sitting: it's hard to put down), put to into practice, and refer to again and again.
Copyright © 2020 Thriftbooks.com Terms of Use | Privacy Policy | Do Not Sell My Personal Information | Accessibility Statement
ThriftBooks® and the ThriftBooks® logo are registered trademarks of Thrift Books Global, LLC