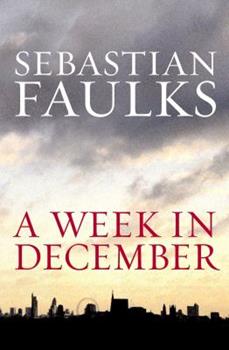 A Week in December

In the blustery final days of 2007, seven characters will reach an unexpected turning point: a hedge fund manager pulling off a trade, a professional football player recently arrived from Poland, a... This description may be from another edition of this product.

Living In An Alternate Reality

Published by Thriftbooks.com User , 12 years ago
Sebastian Faulks is nothing if not ambitious. In his latest book, a sweeping and piercing satire about contemporary London, Mr. Faulks takes on everything from the financial meltdown and the profusion of silly book awards to shockingly offensive reality TV, cyber porn, London football, and, for good measure, Islamic radicalism. The good news is, for the most part, he succeeds admirably. Within these pages, we meet a fascinating cast of characters: a hedge fund manager who plots and schemes to become filthy rich from the crash of a well-known bank. His skunk-addicted son who is obsessed with a new reality show called It's Madness, which pits schizophrenics, bipolars, and other mentally challenged contestants against each other to win a free year of treatment. A Pakistani businessman who introduces lime pickles to London and has been nominated for an OBE from the Palace and his teenage son, a would-be terrorist who dreams of converting the world to pure Islam. And a disgruntled literary critic - R. Tranter - who envies and savages a rising literary star in a most unpleasant way. At first glance, this disparate cast has little in common; however, each of them, in his or her own way, is escaping from something that one character calls "true life." We've come a long way, Mr. Faulks seems to suggest, from a sense of value and purpose. Our modern life has become dumbed-down and turned us into anesthetized robots, tethered to our cell phones and laptops. One character shuts out the world with a genetically-mutated drug ("skunk"); another with an alternate-reality game called Parallax; yet another with extremist religious beliefs; still another with a retreat into the 19th century of literature where things were simpler. And perhaps the boldest reality-alterer of all, the financier John Veals, builds his fortune on the illusion of market stability. The satire is often delicious, like reading a Tom Wolfe novel (think: Bonfire of the Vanities). Some of it is laugh-out-loud hilarious, such as a scene in which the would-be suicide bomber explains to his handler that he may be tardy to his mission because he is being forced to accompany his father to Buckingham Palace to receive his OBE. Or this scene: the Pakistani Farroq al-Rashid hires R. Tranter to give him a crash course in literature so he can "chat up" the Queen, only to have his entire list summarily dismissed ("OT - Oirish Twaddle", "poor man's Somerset Maugham, or "the man who put the `anal' into `banality'). Or this gem about the latest book prize: "The Pizza Palace Book of the Year prize, somewhat controversially, was awarded to either a children's story, a travel book, or a biography. Excluding all fiction was a bold thing to do, but it was felt that novelists already had enough prizes of their own..." It is likely that the reader will relate to some characters over others; for this reader, it was sometimes hard to follow the marginally-legal high-stakes financial deals, done

Published by Thriftbooks.com User , 12 years ago
I have a particular fascination with books that move among multiple points of view, interweaving the characters' mini-plots into one well-crafted whole. Overall, Sebastian Faulks's latest novel, A Week in December, successfully does just that. With tongue firmly in cheek, but also with a good amount of affection for all of his characters, Faulks gives us a well-rounded but satirical view of contemporary London society: the good, the bad, the ugly, the charming, and the misguided. Two potentially disaster-creating characters--hedge fund owner John Veals and would-be terrorist Hassan al-Rashid--take center stage, and while their stories are indeed fascinating, they push the others' (some of which I found much more interesting) into the background. If the novel has one fault, it may be that there are a few too many threads in the plot, and, as a result, some characters get shorted. I wanted to know more about Jenni Fortune, the book-loving tube conductor who is addicted to an online role-playing game, and her blooming romance with barrister Gabriel Northwood; I wanted to learn more about Gabriel's schizophrenic brother Adam; about the senior al-Rashids; about Spike, the Polish soccer player, and his girlfriend, Olya, who poses for online porn. The novel also runs the reader through the full emotional gamut. Perhaps the most satisfying moments for me were those that reflect on books, reading, academia, and the world of competitive literary prizes. Faulks is at his satirical best here. As an educator, I was particularly amused by a small incident, the book reviewer R. Tantor being hired (undercover, of course) by a school to write comments on students' papers, a way of appeasing the parents who complained that the teachers themselves couldn't even spell. And I was highly amused by Trantor's observation that technology has managed to make ignorance not only acceptable but an asset. He's a cranky old bird who gets his comeuppance in the end, but his perceptions are often right on target. A Week in December is sharp, entertaining, and complex. It's one of those rare books that I will likely read again one day, because I feel that I might have missed something.

Published by Thriftbooks.com User , 12 years ago
A WEEK IN DECEMBER is a tour de force that offers both high entertainment and provocative ideas. It is as fine a "just-published" novel as I have read in the past five years. First the entertainment: The novel introduces a dozen or so principal characters (and another two dozen secondary ones) who are involved in four major inter-related story lines (and another handful of secondary ones) that develop and converge through one week in December -- specifically, December 16 through December 22, 2008. The setting is contemporary, multi-cultural London (where now 75% of births are to mothers who were not born in the U.K.). The major story lines are: a global financial coup concocted to wrest billions of pounds for a hedge fund at the cost of a major U.K. bank and to the financial detriment of millions of pensioners, subsistence-level African agricultural workers, and (of course) taxpayers; an Islamic terrorist bombing plot; the descent into psychosis by the 16-year-old son of a billionaire financier with ready access to £700 for genetically-altered marijuana; and an unlikely and touching romance. The narrative develops and interweaves these as well as the secondary tales very skillfully, creating an ever-accelerating propulsion as the week unfolds and the stories head towards their dénouements. It all makes for a novel difficult to put down. Now for the ideas: A WEEK IN DECEMBER explores such subjects as Islam and terrorism, the Alice-in-Wonderland world of high finance over the last thirty years with its exotic financial instruments and unbridled greed, the interpenetration of the virtual reality of the internet-world into the reality of "True Life", schizophrenia, the dumbing-down of education in the West, and the overall crassness and shallowness of "culture" in the U.K. (and that list constitutes just the tip of the iceberg). For example, with regard to Islam, the most thoughtful of Faulks's characters in the novel reflects as follows: "Once an early theological debate had decided for all time that the Koran was literally and in every syllable the unmediated word of God, then all Muslims became by definition `fundamentalist.' It was by its nature unlike Judaism or Christianity; it was intrinsically, and quite unapologetically, a fundamentalist religion. There was, of course, a world of difference between `fundamental' and `militant'--let alone `aggressive'; but the intractable truth remained: that by being so pure, so high-minded and so uncompromising, Islam had limited the kind of believer it could claim." Another example, having to do with society's approach to knowledge and education: "In premodern societies the aim of people was simply to preserve what had been learned, not to lose it." But by the twentieth century, Western society, especially in Europe, had adopted the goal of universal education and a net gain of knowledge among all, from generation to generation. "And that's now been abandoned as a goal. * * * From no

The ending made me weep

Published by Thriftbooks.com User , 12 years ago
This is tour-de-force writing. Four - or is it five? - threads follow a disparate group of people, seeming unrelated, in a weave of densely patterned prose, with a lightless cyclist in darkling near-collisions acting as the shuttle but only once as a catalyst. The characters are fully realized, their interior lives brought forward; you begin to care about them, fear for them, be anxious for their welfare. The climax approaches, you fear the worst, the tile-counter works his incantation against his visions, but the shock is not expected and relief evokes mixed emotions. You'll stay up late to finish this.

Published by Thriftbooks.com User , 12 years ago
This is a great book, well written, poignant, funny. I don't want to go into the details of the plot too much because it will spoil the book for readers. The characters range from a mixed race tube train operator, whose father abandoned her mother when she was 5, to a multibillionaire hedge fund manager, a second generation Pakistani boy wrestling with his identity and flirting with Islamofascism. Also a pompous negative Oxford educated book reviewer and a failed barrister thrown in for good measure. I am a lawyer and can tell you that the picture of the hedgefund manager and his shenanigans is spot on. Sebastian Faulks also wrote Birdsong, another wonderful book. One of the best books I have read in years and I read A LOT.
Trustpilot
Copyright © 2022 Thriftbooks.com Terms of Use | Privacy Policy | Do Not Sell or Share My Personal Information | Accessibility Statement
ThriftBooks® and the ThriftBooks® logo are registered trademarks of Thrift Books Global, LLC