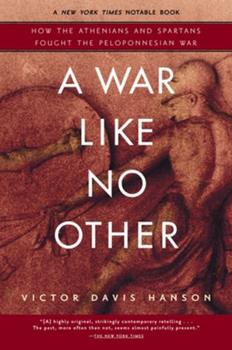 A War Like No Other: How the Athenians and Spartans Fought the Peloponnesian War

One of our most provocative military historians, Victor Davis Hanson has given us painstakingly researched and pathbreaking accounts of wars ranging from classical antiquity to the twenty-first century. Now he juxtaposes an ancient conflict with our most urgent modern concerns to create his most engrossing work to date, A War Like No Other. Over the course of a generation, the Hellenic city-states of Athens and Sparta fought a bloody conflict that...

Published by Thriftbooks.com User , 15 years ago
I have a graduate degree in studies relating to this period, I have read Thucydides, and I have studied ancient Greek, so the subject matter of Hanson's book is not unfamiliar to me. I found it engaging, thoughtful, and absolutely brilliant. I especially liked his skill in relating events of the times to concepts and concerns the modern reader can relate to, as well as his ability to flesh out the personalities of the participants. He personally tested some of his theories and attempts to define ancient Greek expressions, e.g., how hard is it to "lay waste" to an orchard and what might this phrase actually have meant, and he describes first hand the terrain on which some battles were fought. He also offers interesting discoveries relating to numbers of things--I had no idea that so few of the battles fought were hoplite engagements, nor did I know that all of the generals suffered in some way for their efforts. I've always found that counting things can be very useful, and Hanson used arithmetic very effectively to make interesting points. I thought that all of his insights were fresh and went a long way to bring reality and common sense to the text. I liked the inclusion of the Greek words he is translating. I also liked the organization of the book into different ways of examining the war rather than a simple chronological exegesis or the sort of timeline that is always to me rather boring. In addition, Hanson writes in an engaging, clear manner. I learned a great deal from this book and think it is simply brilliant.

"There's a commonality to war...that transends time and space."

Published by Thriftbooks.com User , 16 years ago
The above quote is the thesis of Hanson's book. His message,like Thucydides's classic, is meant to be for the ages. Most of us limit our study to the Pelopponesian War (what Hanson calls the "first civil war in a western civilization")to the great classic, which Hanson points out, sells 10,000 copies a year! This book is as necessary a companion as the comments in the famous "Landmak Thucydides". There is so much in Hanson's book that is thoughtful, from the comparison of Agis and Pericles with Sherman, Kitchener and LeMay, to the key conundrum that Athens could not solve: how to dissolve the alliance of Sparta, Thebes and Corinth. Unlike many others, Hanson does not feel the the Sicilian campaign was in itself decisive in Athens' defeat; rather it was the influence of Persia. Hanson pretty much repeats his excellent earlier work when he discusses land warfare, and his discussion of naval warfare seems heavily influenced by Barry Strauss. Particularly interesting was how the traditional "social" qualifications for serving as a hoplite, cavalryman, psiloi or rower broke down under the pressure of "total war". He raises but cannot solve the problem of the inability of classical Greeks to storm even small cities.

Published by Thriftbooks.com User , 16 years ago
Hanson is one of the most readable military- political writers.. He is able to see the whole picture and thus to relate what he sees with a special kind of clarity. In an interview he gave to FrontPageCom. he spoke about a certain parallel between Athens of that time, and the United States of today. In both places it is severe domestic criticism that undermines seriously the war effort. It seems to me that Hanson is very much concerned about the precedent of Democracy losing. He believes that a democratic nation must have a strategy for winning the war, and not for simply carrying it on indefinitely. I suspect however that the great enjoyment of this book does not relate to the parallels between past and present, but rather to the dramatic, tragic story of the Pelopennesian War as analyzed in this work. Because of his depth of knowledge, enthusiasm for his subject the parallels and implications he draws from the Athens-Sparta war to other wars, are by and large convincing. It seems to me that if there is one book President Bush should be reading these days. It is this one.

Published by Thriftbooks.com User , 16 years ago
This book is a must read for anyone with even a passing interest in the Peloponnesian War. Familiarity with Thucydides' original history of this event is recommended, but not essential. Hanson helps in this regard with appropriate insights and quotes from Thucydides' work. Hanson's passion for his work comes through in a highly-readable and energetic overview of this important world/civil war. His ability to bring BC events into the present context is remarkable and adds so much to our understanding of something that happened over two thousand years ago.

Published by Thriftbooks.com User , 16 years ago
Dr. Hanson has taken this well studied war and approached it from a a very interesting perspective. Rather than the standard chronologic retelling (done recently and well by Donald Kagan), Hanson delves into the facets of the conflict such as ships, seiges, horses etc. to craft a readable and stimulating exegesis of the twenty-seven year bloodbath. I say readable because his writing is fluid and almost conversational. You almost feel as though your in a lecture hall. My only criticism (which doesn't cost the book a star) refers to the quality of the maps ...they don't seem to add very much to the text other than simply showing where the various cities or islands are located. Personally, I prefer the tactical maps and would have liked to see more of them, especially for episode such as Mantinea , Delium, and the late naval battles. That aside, this was a wonderful experience. I hope Dr. Hanson will someday do the same for the Punic or other Roman wars.
Copyright © 2020 Thriftbooks.com Terms of Use | Privacy Policy | Do Not Sell My Personal Information | Accessibility Statement
ThriftBooks® and the ThriftBooks® logo are registered trademarks of Thrift Books Global, LLC