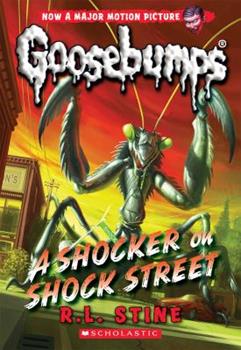 The original books featuring the scariest creatures from the Goosebumps movie, in theaters October 16, 2015 Erin Wright and her best friend, Marty, love horror movies. Especially Shocker on Shock Street movies. All kinds of scary creatures live on Shock Street. The Toadinator. Ape Face. The Mad Mangler. But when Erin and Marty visit the new Shocker Studio Theme Park, they get the scare of their lives. First their tram gets stuck in The Cave of the...

Published by Thriftbooks.com User , 16 years ago
I loved this book. It's real scary and you can't wait to see what happens next. A must read.

This is a great book!!

Published by Thriftbooks.com User , 16 years ago
I think R.L. Stine did a great job on this book.Its about these two kids,Erin Wright and Marty.They LOVE horror movies. They really like Shocker on shock street movies.So they are thrilled when Erin's dad tells them they will test out the new Shocker on shock street studio tour.But when they go on the tour,things start getting really weird.They're attacked by werewolves,dead people in a graveyard, skeletons, and giant praying mantasis,and much, much more!Plus, it has a great suprise ending.You never would have expected it.I think you really should read this book,you won't be dissapointed.

A Shocker On Shock Street

Published by Thriftbooks.com User , 19 years ago
A Shocker on Shock Street is full of suspense and sends chills down your back.It's characters are two kids who love scary movies. The cool thing is that it's setting is at Shocker Studio Theme Park. All the scary things turn real which is neat to me. They think it's fake until they bump into living, scary creatures. The book is vivid on it's words. This book makes think your watching the terror unfold right before your very own eyes. You will find the end kind of funny because you find out the two main characters are robots. They were just apart of the theme park. I would recommend this book to anyone who likes scary tales. Both adult and child.

Published by Thriftbooks.com User , 19 years ago
It is quite an amazing book. I just love the idea of giant praying mantises in a studio tour. The story really works when Chapter 16 starts because of him thinking of the joke when really it wasn't. Then is when the suspense really builds up. Someone or something is there, waiting for him. When she finds her dad though you just know what is going to happen, well you can guess?

Two kids go to the scariest amusement park in thier lives.

Published by Thriftbooks.com User , 24 years ago
Two kids go to the best movies, the Shock street movies. when the shock streetamusement park was made, they got to be the first people in it. Everything was giong fine untill something went terribly wrong.
Trustpilot
Copyright © 2022 Thriftbooks.com Terms of Use | Privacy Policy | Do Not Sell or Share My Personal Information | Accessibility Statement
ThriftBooks® and the ThriftBooks® logo are registered trademarks of Thrift Books Global, LLC